Forums
Forum Index
Historical Members ...
Duane Allman
When and where did ...

When and where did Duane Allman use his SG?

Trying to figure out when Duane used his SG for his slide stuff. Did he use it on the last Fillmore show (06-27-71), AR studios, Stonybrook, etc. Thanksb

Hi Cade this is Willie from Virtual Woodshed and Skydog. Actually that SG started out as Dickey Betts’ guitar. As memory serves, DB gave it to DA right around the time Dickey got his goldtop which I think was spring of ‘71. You can clearly see DB playing the SG in lots of pics and video including this killer footage from Love Valley in the summer of ‘70.

Despite what the pictures would make you think, Duane didn’t really play the SG for very long. Basically just the summer of ‘71, is my understanding. Most of the shows prior to that you can hear him retuning for the slide material which meant he was playing the Les Paul. Interestingly a few years ago Gibson reissued that guitar and you can read more about it below. The last I heard, Graham Nash is the current owner of the SG. Not sure if that’s still correct. There’s lots of info on that guitar out there on the gear page and elsewhere. It’s sure fun to track down all that stuff! Happy hunting.

There is a picture of Duane playing the SG in his only appearance here in Co. Late May 71. Which could be the reason for his distinctly different slide tone on One Way Out on the closing night of The Fillmore in late June used on EAP. The tone has a violin like tone unlike anything that ever came out. Could that be the SG? His only other slide performance on record is on Stand Back which is a different tone altogether and it's anybody's guess which guitar he's playing on that. Diane's slide tone varies in subtle differences on virtually everything he plays on in the studio. I never knew he was playing a Strat on Don't Keep Me Wondering where he cops a whole different tone and plays one of my all time favorite DA solos. Also he's obviously playing the Strat on Whipping Post!! My vote for One Way Out is that he was playing the SG! Possibly the only officially recorded evidence of that particular guitar on record. Graham Nash should take it out of his closet and loan it to D. Trucks. The SG deserves to be played!!!

I never knew he was playing a Strat on Don't Keep Me Wondering Also he's obviously playing the Strat on Whipping Post!!

Where did you read/see this info?

I remember reading somewhere on here (HTN) that Duane had two SGs. One that he played early in ABB or pre ABB and a different one that he played later in latter part of 1971. Am I nuts, or did someone else ever hear or read of that?? The first one was an SG and the second one was an SG Les Paul. I think he was playing the latter in photos from the Central Park gig (July 1971). The photo from "Duane Allman Anthology Vol. II" is from that Central Park gig.

I remember reading somewhere on here (HTN) that Duane had two SGs. One that he played early in ABB or pre ABB and a different one that he played later in latter part of 1971. Am I nuts, or did someone else ever hear or read of that?? The first one was an SG and the second one was an SG Les Paul. I think he was playing the latter in photos from the Central Park gig (July 1971). The photo from "Duane Allman Anthology Vol. II" is from that Central Park gig.

I think the pre-ABB guitar your referring to was a Les Paul Jr model that eventually evolved into the SG/Les Paul.

Duane's Jr was owned by Delaney Bramlett for a while. 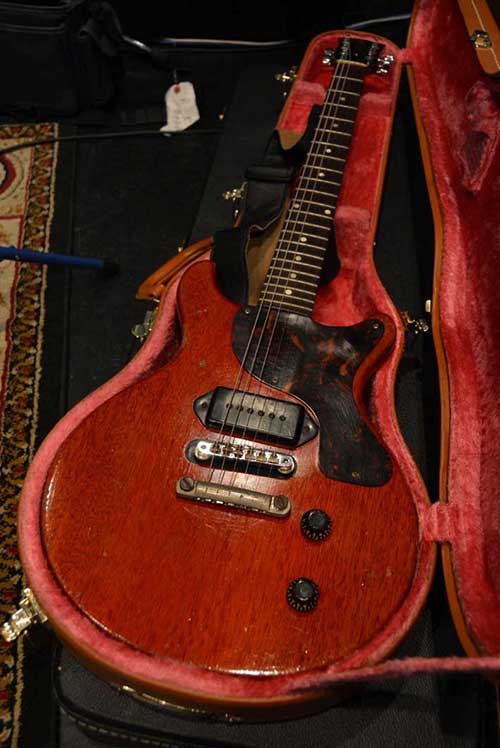 Apparently its currently owned by this guy.

On a side note,

I'm 71 years old and saw lots of shows on the east coast. Also there is a video that I didn't see just now on YouTube when I looked just now, it use to be on line, of Dickey and Larry Parnell promoting the Gibson Brother to Brother SG custom shop series which is a reproduction of the SG Dickey gave Duane down to the ware marks and the holes in the wood where a tail whammy bar use to be. I think Derek Truck's bought one of those SGs too.

Dickey's no. 1 when the ABB formed was a Gibson ES-335. Dickey said he then played a Strat as his no. 1 followed by that SG. Dickey said he liked what Duane was doing with a Les Paul and decided to get one himself. Dickey said that is when he went to Duane and said "Instead of tuning your Paul for slide, take this guitar and keep it tuned for slide and just switch guitars. "That was very late 1970 or early 1971. Dickey went through several Les Paul's before he found just the right one which became to be called Goldie which he bought at a New York City pawn shop in 1974. So that is how the SG went from Dickey to Duane.

Dickey said when Duane died Gregg gave him the guitar Duane played on Little Martha which is a dobro type guitar and Dickey is holding that guitar Duane owned on the cover of Highway Call, Dickey's solo album from 1974 and Gregg gave the SG to a guy who use to hang out with the band. Dickey said he didn't know where the SG was for years but he had it with him on the video with Leroy Parnell. It's said Graham Nash owns it now but Dickey didn't mention that but he let Leroy Parnell hold it and Leroy commented on the ware marks on the back of the body which he said looks like belt buckle marks.

It's hard to remember the dates and places but I remember seeing Duane play an ES-335, a Strat and several Les Paul's including a Goldtop and a Sunburst. I clearly remember Duane played a Goldtop at Love Valley in 1970 and there is footage on YouTube confirming it. But it seems to me in 1971 Duane played a tobacco burst Les Paul and an SG (obviously the one Dickey gave him) on slide at the shows I've seen in 1971. But there were many I didn't see.

So any live recordings in 1971 probably has the SG on slide. Studio is a different matter. Duane and Dickey played several guitars in the studio. Once Dickey said they liked Strats on rhythm on some tracks in the studio. And I've seen pictures of Duane in the studio with a Strat. Warren Haynes said you can make a Strat sound similar to a dobro when playing slide which Warren said he did in the studio track Seven Turnes in 1990.

I heard about the Strat on Don't Keep Me Wondering here on the forum from a Duane expert that had a lot of inside info. The tone he gets on the solo is unlike other. As for W. Post that was pointed out by my resident guitar expert Neil. The sound of the Strat is obvious with lots of reverb or echo.

I recall reading from someone who said they were a friend of Twiggs, I think on the Les Paul site, that Duane used the SG on Blue Sky in regular tuning on the studio version. I had never heard that before and can't verify it, but I had always wondered if Duane ever played the SG in regular tuning.

I also recall Duane using a Strat on Don't Keep Me Wondering. I also remember Dickey saying he used a Strat on some songs on the first album, mostly for rhythm. I've never seen a picture of Duane with a Strat with the ABB in the studio. Only in the studio from his days as a studio musician. On the Love Valley tapes there was a mud fight and the band left the stage, I think during Black Hearted Woman. Butch said Duane was playing a Strat on that song, and got mud on his Strat when that incident occurred, which is why they walked off.

Just read quotes from roadie Joe Dan Petty and the young man Gregg gave the SG to when Duane died that Duane does use the SG on At Fillmore East on slide including Statesboro Blues. Gary Groom said they planned to bury the SG with Duane then Gregg remembered Duane said if anything happens to him to give the guitar to Groom. Groom later sold it the Graham Nash's wife so she could give Graham the guitar as a birthday gift. Supposedly it's at the Hall of Fame now but Dickey had it with him when he did the presentation for the Brother to Brother custom guitar SG program. Dickey said the made 80 with his name on them and he got one. They even have a belt buckle scratch on the back that matches the original 1961 guitar and the holes in the body near the bridge where a whammy bar made by Gibson use to be. Dickey couldn't exactly remember when he got the guitar but supposedly it was in Detroit. Dickey had a Gibson ES-335 when the ABB began then he got a Strat followed by the SG. Joe Dan Petty said Dickey got his first Les Paul in Detroit but he didn't warm to it. He had some others including a sunburst with zebra pickups before he found his 57 Gold top in a New York City pawn shop. So Duane was given the SG in very late 1970 to very early 71.

Early pic of the SG/Dickey with the sideway trem still attached before the stop tail was retro fitted?

Great pic. That may be 1969. Dickey used an ES-335 when the band got started but I think he also used the SG some. Then from late 69 to early 70 Dickey played a Strat. By summer he was playing the SG again and the sideway trem was gone but it left holes in the body. Those holes and belt buckle damage on the back of the body we're reproduced on all 80 of the custom shop Brother to Brother SG Gibson put out. Dickey played one for a few years toward the end of Great Southern in 2014 and Derek Trucks got one but I don't know if it's his number one.

Also it seems Groom died and it was his family that sold it to Graham Nash's wife for a birthday present for Graham.

If roadie Joe Dan Petty has it right, Duane Allman is using this SG on Fillmore East and the live cuts on Eat A Peach on slide. Les Paul on the leads.

Latest Post: How long do you think it will take to count the votes? Our newest member: doreen90 Recent Posts Unread Posts Tags