Some House Republicans downplay the events of January 6th in hearing

House Republicans sought to downplay the January 6 attack on the U.S. Capitol in a contentious hearing on Wednesday, while Democrats clashed with former Trump administration officials over the response to the assault.

The hearing came shortly after House Republicans voted to remove Congresswoman Liz Cheney from her post as conference chair for her criticisms of former President Donald Trump, and indicated the widening gap between the two parties' recollection of the day. A mob of Trump supporters laid siege to the Capitol on January 6 in a violent attack that resulted in five deaths, hundreds of injuries and damage to Capitol property.

Rioters overran the Capitol shortly after Mr. Trump delivered a speech at a rally urging supporters to "fight like hell" to overturn the election results. Then Vice President Mike Pence and members of Congress were gathered at the Capitol that day to certify President Joe Biden's Electoral College victory.

On Wednesday, Republicans repeatedly denounced characterizing the riot as an "insurrection." Congressman Andrew Clyde said "there was an undisciplined mob," but argued that "to call it an insurrection in my opinion is a bold-faced lie."

"Watching the TV footage of those who entered the Capitol and walked through Statuary Hall, showed people in an orderly fashion in between the stanchions and ropes taking pictures. If you didn't know the footage was from January 6, you would actually think it was a normal tourist visit," Clyde said.

But Clyde's description undersells the violence of the day. Rioters attacked law enforcement officers defending the Capitol, injuring 140 Capitol and Metropolitan Police officers. One officer died the day after the attack, and two died by suicide shortly thereafter. Mike Fanone, a Metropolitan Police officer attacked by rioters on January 6, said in an open letter to lawmakers last week that he is still traumatized by the day's events.

"I struggle daily with the emotional anxiety of having survived such a traumatic event but I also struggle with the anxiety of hearing those who continue to downplay the events of that day and those who would ignore them altogether with their lack of acknowledgement," Fanone said in his letter.

"Well, I don't know a normal day around here where people are threatening to hang the vice president of the United States or shoot the speaker," Pelosi said. "It was beyond denial, it fell into the range of sick."

Congressman Pat Fallon also said Wednesday that descriptions of the attack were overblown.

"Our friends in the mainstream media are quite fond of labeling January 6 as an insurrection or even a rebellion. But are those descriptions accurate, or are they hyperbolic?" Fallon asked. He did acknowledge  an "unruly and dangerous mob of about 400 broke the law, trespassed, committed various other crimes and endangered the health, safety, wellbeing and lives of many innocent people."

GOP Congressman Paul Gosar suggested during the hearing that it was wrong for federal law enforcement agencies to seek assistance from Americans in tracking down individuals photographed and videoed potentially violating federal law on January 6.

"The government has even enlisted Americans to turn in their own neighbors," Gosar said.

Gosar and Republican Congressman Jody Hice also both discussed the death of Ashli Babbitt, who was shot and killed by a Capitol Police officer as she and a group of protesters attempted to gain access to the House chamber, where most representatives were still sheltering at the time.

The Justice Department announced last month it would not bring charges against the officer who shot Babbitt, determining the officer could reasonably believe it was necessary to shoot Babbitt out of self-defense or in defense of those evacuating the House Chamber.

Meanwhile, Democrats confronted Miller and Rosen on Mr. Trump's actions in the days leading up to and on January 6. Miller was challenged by Democratic Congressman Stephen Lynch, who asked whether he still believed the attack would have happened if not for Mr. Trump's speech at a rally earlier that day. Miller said in March that the events of January 6 "wouldn't have happened" without Mr. Trump's speech.

"I think I'd like to modify my original assessment," Miller said. He added it now "seems clear that there was some sort of conspiracy where there were organized assault elements that intended to assault the Capitol that day." When Lynch suggested Miller had reversed his stance, Miller said "that's ridiculous."

Democrats also repeatedly pushed Rosen on whether Mr. Trump asked him to overturn the results of the election, but Rosen declined to answer.

"This is why it's so hard to get to the truth," Democratic Congressman Kweisi Mfume said.

As we’ve mentioned in another thread, anything to keep their jobs....This attempt to rewrite the events of January 6th is mostly to appease the cult leader and avoid his wrath and thus a primary challenger.

However, for a few of these nuts, it very well might be to avoid further scrutiny from the FBI and possibly indictment for crimes they committed on January 6th..

A member of the Capital police force got bludgeoned to death

excuse me while I vomit

A member of the Capital police force got bludgeoned to death

That ended up not being true

On Jan. 8, 2020, the Associated Press confirmed a fifth death: that of Capitol Police officer Brian Sicknick, who died “from injuries suffered during the riot.”

Congress has always had a fringe of odd ducks & pugnacious representatives, but they were outnumbered by statesmen or at least reasonable people. Now, we have bots who fear for their job or, if Liz Cheney is to be believed, their lives if they go against their party leader. Both sides are extreme. Frankly, I've never thought a job in Congress was so appealing that I'd abandon common sense to get or keep one. It seems to be a job corps for yes men.

On Jan. 8, 2020, the Associated Press confirmed a fifth death: that of Capitol Police officer Brian Sicknick, who died “from injuries suffered during the riot.”

That snopes link hasn't been updated since January.  Brian Sicknick's autopsy was released in April.  I wasn't saying that it was not true he died, I'm saying it is not true that he was "bludgeoned to death".  In fact he had no external or internal injuries.

fwiw it is highly unusual a 42 year old would die of that.

that said, actions of the House GOP still make me want to vomit

fwiw it is highly unusual a 42 year old would die of that.

that said, actions of the House GOP still make me want to vomit

It seems like a pretty clear connection that the events of the day Officer Sicknick was involved with lead directly to his death later that evening, however charging somebody(s) with his death and proving that criminally might be difficult.  Early on it was widely reported he was killed after being attacked and beaten with a fire extinguisher.  Clarifying that point was my original intention in reply.

He should never have died, he should never have been attacked.  Occasionally there are some factual points that some of these Republicans raise that contribute to the overall story - but it's the manner and style and motivations behind the ways in which these Republicans make these statements that is often insulting to those of us who look upon January 6th for what it was.  I do think a commission is best to detail everything and become the definitive documentation on it all.

1 Capitol police officer dead that day and 2 others died of suicide shortly thereafter.  I really don't care about any of the rioters that died.  BUT what isn't cited or remembered as much were the over 100 officers who were injured, some serious injuries.

445 arrests according to this NPR tracker which lists everyone's name, age and location along with their charge.  Of note, I can't find one who has been charged with insurrection or rebellion.  If they were all convicted of felony charges, at least that is 445 fewer Trump voters!

thanks for clarifying that the "peaceful, law abiding, patriots" caused injuries to > 100 officers and may have led to death of 1-3 others.

Let's get this commission going

Some might know that I tend to be fairly harsh in punishment for unlawful actions. That NPR link identifies the charged individuals who assaulted law enforcement officers...you might guess what I think should happen to them after being found guilty.

Now McCarthy is coming out against formation of a commission investigating the event. Not a surprise, especially that he will be embarrassed when his call to Trump that day repeated

My favorite liberal talk radio listen, Thom Hartman, is also against the commission.  Although for different reasons.  He doesn't believe that any kind of bipartisan commission can truly present the facts as they are (because in his opinion Republicans always lie and they inaccurately influence the overall story of the commission's work - he gave examples of the 9/11 commission which I think were suspicious requiring fact checks).

I forget exactly which one, but years ago a popular comedian did a bit that involved a guy on trial for a particular crime.  I forget the routine as well as the comedian but the gag-line was something like, "it was supposed to be a jury of my peers - but there wasn't a single thief or robber on that panel!".

In this case, the sides got flipped.  Here we have the jury - in the form of the Republican party - acting sympathetically to the offender - the former President of the United States.  At least Nixon was finally held accountable.

Plenty of proof of our free country that day, the right to assembly, speech, protest, however, when they assaulted officers and broke into the center of our republic, they most certainly should've been cut down.

Plenty of proof of our free country that day, the right to assembly, speech, protest, however, when they assaulted officers and broke into the center of our republic, they most certainly should've been cut down.

Yeah man - exactly, the only reason they were able to pull that stunt was because they broke faith with those rights - in China they would have been run over with tanks. This is a free country so there wasn't a line of cannon waiting for their rush.   Hoodwinked gullible ignorami.  I just read the rabblerouser speech that led to the chaos - just a rambling unintelligible rant.  Absolutely a travesty.  That is our house, we pay for it, same rules should apply as home invasion. 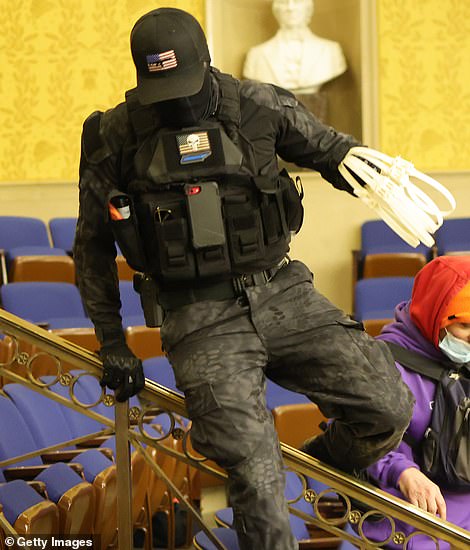 This has probably been mentioned before, but if it was a BLM protest, there would have been tear gas, rubber bullets, and billy clubs.

But the capital insurrection was endorsed by Trump, Rudy, Cruz etc

welcome back @brerrabbit! Good to see you here