I think it's actually a July 1970 Stonybrook show. I don't think they had incorporated "Stormy Monday" or "Don't Keep Me Wonderin'" into the set list by Jan 1970. Also this show sound much tighter than Fillmore East 2/70.

@porkchopbob I think you are likely correct. An old friend of mine talked me into going to see the Allman Brothers Band in early 1970. I wasn't really in the mood to see a band that night but I was pleasantly surprised!! The effect they had on me was like taking a powerful drug and you are hooked immediately. It was a spiritual experience and they have been my favorite band since!!

It's been so many years ago but I was kind of a gear guy with guitars and that night and the first several shows I got to attend, Duane was playing a Goldtop LP and Dickey was on a Strat. Berry I think was on a Guild bass a couple of shows.

"Outskirts of Town" is a pretty old tune, I think Louis Jordan popularized it in the 1940s. Probably easier to list who hasn't covered it, lots of different takes on it.

And BB King's version was short and sweet

Albert King always did a nice take, of both tunes for that matter

And Lou Rawls released a version of "Outskirts", coincidentally, on his album titled Stormy Monday

I've never heard why the Allman Brothers stopped playing it live, they were still playing it during rehearsals in 1973.

Maybe they just preferred "Stormy Monday". But it makes sense to just have one slow blues tune in a small set list.

The Allman Brothers' arrangement of "Outskirts" is kind of unique compared to other versions. I'm not sure what version they patterned theirs on, I've never heard another with that ascending vamp they do on the bridge. But their arrangement of "Stormy Monday" is pretty similar to T-Bone's original version...

But they clearly molded their arrangement on Bobby Bland's version (probably why Duane corrects his attribution on Fillmore East). There's even a brief moment where Bland's version almost goes into the shuffle that the Allman Brothers' expanded on for Gregg's organ solo.

I think it's actually a July 1970 Stonybrook show. I don't think they had incorporated "Stormy Monday" or "Don't Keep Me Wonderin'" into the set list by Jan 1970. Also this show sound much tighter than Fillmore East 2/70.

Thanks...Interesting is the organ solo is not between the guitar solos on this version but the last solo

I believe you're thinking of "Early Morning Blues". Both old standard jazz/blues tunes. Pretty similar turnaround at the bridge in their arrangement.

Gregg decided to replace the vocals of "Early Morning Blues" with "Jelly Jelly".

I believe you're thinking of "Early Morning Blues". Both old standard jazz/blues tunes. Pretty similar turnaround at the bridge in their arrangement.

Gregg decided to replace the vocals of "Early Morning Blues" with "Jelly Jelly".

It's all good...Yeah and I discovered it the opposite way hearing Jelly Jelly first then getting some bootleg that had OSOT and me going....Hey!!! they used those changes on Jelly jelly...wish they played Jelly Jelly live...Isn't jelly Jelly 2 different songs too

@porkchopbob  I never noticed Outskirts of Town again after I began hearing Stormy Monday. I saw as many shows as I could but in 1970 and 71 they played over 400 shows and I saw about 35. I probably missed several songs. I know of Revival and Pretty Woman with Berry signing were played during that stretch but I missed them.

When the 2013 Brothers and Sisters came out with the live versions and the Chuck/Lamar lineup versions of other songs and the outtakes from the Brothers and Sisters sessions, that is when, as you linked, the Early Morning Blues version came out and I heard it the first time. Obviously Gregg simply redid the vocals. The music is the same take and session that is on Jelly Jelly except the outtake doesn't fade out Dickey after Dickey plays I think one of the best slow blues solos I've ever heard.

In Gregg's book Gregg wasn't expecting Brothers and Sisters to do well and not sell as well as Eat A Peach and Fillmore East but he had felt good about Laid Back doing very well. Gregg wrote in his book he and much of the band were caught off guard and felt awkward when Brothers and Sisters went to number one out of two hundred positions on the Billboard album chart and stayed at number one for five weeks. And by the time they were well into their long 1973 tour, they were being told they are the number one band in America and Gregg claimed they were not ready and prepared for that.

I don't know, when I read that in Gregg's book, it almost feels as if Gregg didn't like Brothers and Sisters doing that well. But that may not be how he felt. But Gregg was well pleased with how well Laid Back sold. By far his best selling solo album and the one he called "my baby".

How do you feel about that Chuck/Lamar lineup? It was a different Allman Brothers that is for sure. One lead guitar and organ plus a hot piano player. Lamar a different kind of bass player but actually he was very good. Gregg lost interest in the band during that lineup and they got rich and jaded and Cher later by 1974 became a distraction and it was less and less fire until the band broke up in 1976. It was a different vibe than the original band but all the lineups were a different vibe. I saw several 1973 shows and in 1973 that Chuck/Lamar lineup left a lot of smoke on the stage and Chuck Leavell was amazing.

Different vibe and sound than the original band but in 1973 they could smoke it live.

1973 band with a fine live version of Stormy Monday!!

In the May 2, 1970 Swarthmore College PA show, they did both Outskirts and Stormy Monday in the same show.  I always thought that was odd, kind of a transitional setlist. I would have expected it maybe at the Warehouse or one of the Fillmores, where they could stretch out the setlist due to not having the usual time constraints.

I have this boxset of ABB bootlegs which lists the Whiskey show but when I skimmed though all the discs to check out SQ it appears some of it at least is from one of the other concerts in the box set so this is a bogus concert made up from tracks from other shows at least in this boxset.

here is the setlist for the Whiskey CD in the boxset 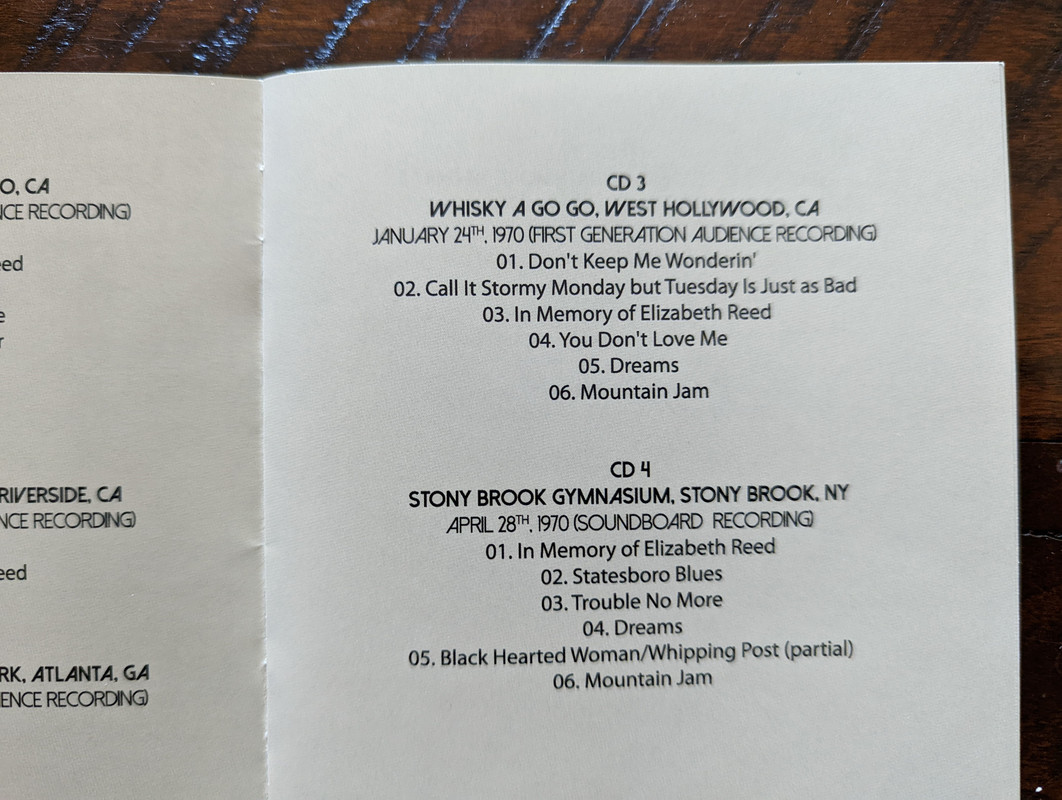 @porkchopbob Wow that IS a revelation!!! When I heard Stormy Monday the first time, I never heard Outskirts anymore at the shows I saw.

Didn't Outskirts eventually have the Duane/Gregg/Dickey solos in the middle with an arrangement very similar to Stormy Monday?

Maybe I'm not remembering right. It's been so many years ago now.