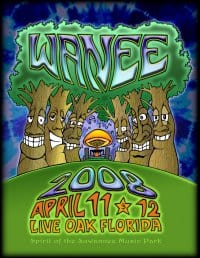 Update:
The Wanee Festival will be going on as scheduled. Gov’t Mule will be closing the Peach Stage Friday night with a full 2 ½ hour concert set and JUST ANNOUNCED the Saturday night Peach Stage will be closed by the WANEE FAMILY JAM prior to the festivals traditional closing Derek Trucks & Susan Tedeschi – Soul Stew Revival, MIDNIGHT JAM on the Mushroom Stage. Don’t miss Bob Weir & Ratdog, Levon Helm Band, moe., Oteil & the Peacemakers, JJ Grey & Mofro and all the other scheduled bands that will also be appearing! For further information visit: The Official Wanee Festival Website.

The Allman Brothers Band announced March 27 that they are postponing their annual run of 15 shows at New York City’s Beacon Theatre set for May 5-24, with rescheduled dates TBA. In addition, they have also cancelled their upcoming performances at the Wanee Festival that they host every year in Florida (set for April 11-12, Wanee will continue as planned despite the fact that the Allman Brothers Band will not be appearing). For the past six months, founding member Gregg Allman has been receiving scheduled treatments for Hepatitis C, a virus that, with these treatments, has become curable in recent years. The treatments so far have been successful and the virus has been eradicated from his system.

However, the recovery time from the side effects of the treatment are taking longer than originally projected. Since the Allman Brothers Band are known for exhilarating and exhausting concert performances they don’t want to give fans anything less than they have come to expect; so the band members made a group decision to delay the first round of dates. “I’m getting better but I’m still tired,” says Gregg. “I need to be at 110% to do the shows the way we do them. I can’t tell you how much I appreciate the support and understanding my Brothers and our fans have given me.”

The Wanee Festival featuring Gov’t Mule, Bob Weir & Ratdog, Derek Trucks and Susan Tedeschi’s Soul Stew Revival, moe., Levon Helm and others will indeed take place April 11-12 in Live Oak, FL, despite the Brothers’ cancellation. As for other Allman Brothers Band dates, a 12-concert jaunt planned for August, including two that have been announced so far (8/16 in Boston, MA and 8/23 in Camden, NJ), will go on as scheduled. The rescheduling of the Beacon Theatre run and additional fall shows will be announced soon.

Gregg and the Allman Brothers Band appreciate the ongoing support they have always received from their fans and look forward to seeing them this summer. The road goes on forever…

Live Nation Florida has recently acquired the assets of Fantasma Productions. Live Nation is honored to assume the producers role for the 2008 Wanee Festival in Live Oak, Fl this April 11 & 12. Live Nation is the leading concert promotion company in America and with its’ expertise, make the festival bigger and better than ever this year. Please visit Live Nation. Com or My Space.com/Live Nation Florida for further festival and ticketing information.

Tickets for the Wanee Festival are on sale now at www.ticketmaster.com/waneefestival or mail order through www.waneefestival.com Tickets are $135 for a two-day pass including camping accommodations for three nights. VIP tickets are $350 and include one (1) two-day pass, a special viewing area for the concerts, a hospitality tent with food and beverages, preferred parking for those not camping and other amenities.

On February 23, the festival ticket price will increase to $150 for a two-day pass including camping accommodations for three nights, followed by another price increase to $165 on March 21 through day of show.

One-day tickets go on sale in late March for $90 per day without camping accommodations and will be available through Ticketmaster or at the venue box office day of show. Walk-up sales at the festival on April 11 -12 will run $165 for a two-day pass including camping accommodations for three nights. Festival gates will open at noon each day. Music begins at 1 p.m. each day.

Conceived by Fantasma Productions and the Allman Brothers Band in 2004, the Wanee Festival is a two-day jam-packed live music event that draws thousands of avid fans from across the country.