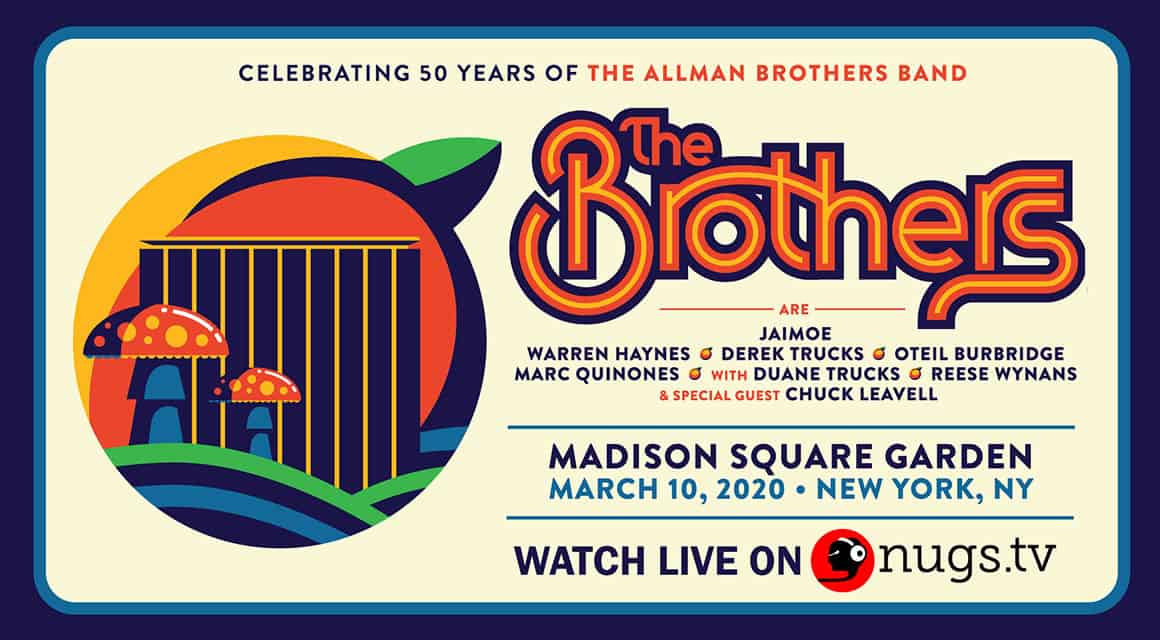 “THE BROTHERS’” MARCH 10 SOLD-OUT SHOW AT MADISON SQUARE GARDEN CELEBRATING 50 YEARS OF THE MUSIC OF THE ALLMAN BROTHERS BAND TO BE AVAILABLE ON PAY-PER VIEW VIA NUGS.NET

More info and order at:
https://2nu.gs/TheBrothersWebcast.

Surviving members of the ALLMAN BROTHERS BAND will come together Tuesday, March 10 as THE BROTHERS for a sold-out, one-night-only show celebrating 50 years of the iconic American band’s legacy. In partnership with nugs.net–the leading live music platform for concert recordings and live streams—the “50th Anniversary Celebration of The Allman Brothers Band” will be available via Pay-Per-View on March 10, 2020.

The Brothers consists of founding Allman Brothers Band (ABB) drummer Jaimoe as well as longtime ABB guitarists Warren Haynes and Derek Trucks, bassist Oteil Burbridge and percussionist Marc Quinones, along with Widespread Panic drummer Duane Trucks and keyboardist Reese Wynans. Former ABB keyboardist (and longtime touring member of the Rolling Stones) Chuck Leavell will join as a special guest for many of the jams he helped create with ABB.

The Allman Brothers Band played their first show on March 26, 1969 and went on to embark on a Hall Of Fame career, which came to a close with their final performance on October 28, 2014 at the Beacon Theatre in New York City.

“NYC has always been a spiritual home for the Allman Brothers, says Derek Trucks. “So it only feels natural to honor Uncle Butch, Gregg, Berry, Duane and all the other brothers and sisters we have lost along the way at MSG. I’m excited to get to play these songs with Jaimoe and the Brothers one last time to celebrate 50 years of this music.”

“I can’t wait to play again with my Brothers,” says Jaimoe.

Warren Haynes said “This is going to be a really special evening. We’re all very happy that even those not able to be inside The Garden will be able to share it with us. “

Brad Serling, nugs.net Founder and CEO, added, “We could not be more thrilled about the opportunity to work with The Brothers on this PPV from MSG. The music that these performers helped to create is so incredibly special. We are very thankful to be able to help share this performance with ABB fans around the planet.”

More information about the Pay-Per-View can be found at https://2nu.gs/TheBrothersWebcast.

About The Brothers
The Brothers are all the surviving members of the final ABB lineup: drummer Jaimoe, guitarists Warren Haynes and Derek Trucks, bassist Oteil Burbridge and percussionist Marc Quinones. Reese Wynans was a member of Second Coming, a band that pre-dated the formation of The Allman Brothers Band by just months and included Duane Allman, Dickey Betts, Berry Oakley, Butch Trucks and Jaimoe. Duane Truck is Derek’s little brother, whose uncle was ABB co-founder Butch Trucks. Duane is currently a drummer for Widespread Panic. Chuck Leavell was first heard by ABB fans on Gregg’s first solo album, Laid Back, and joined the Allmans full-time in 1973 through their first hiatus in 1976.

Founded in 1997 as a fan site for downloading live music, nugs.net has evolved into the leading source for official live music from the largest touring artists in the world. Metallica, Pearl Jam, Phish, Jack White, Red Hot Chili Peppers, Bruce Springsteen and many others distribute recordings of every concert they play through nugs.net. The platform offers downloads, CDs, webcasts, and are the only streaming service dedicated to live music, delivering exclusive live content to millions of fans daily. nugs.net is available on iOS, Android, AppleTV, Sonos, BluOS, and Desktop. Visit nugs.net or get the app at nugs.net/app.