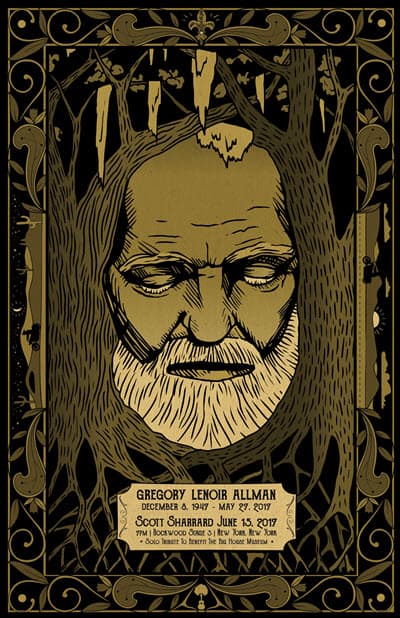 A Solo Acoustic Tribute For Gregg, All Proceeds To Benefit The Big House Museum

“The last few weeks have been a whirlwind of emotions, a heart wrenching combination of inspiration and sorrow. It was an honor to create music with Gregg and his amazing band from 2008 all the way up to our last show together in Atlanta at the Laid Back Festival last Fall. In the last couple years of work with Gregg we became very close. Late night hangs and long songwriting sessions, getting deeper to the core values at the heart of his own sound and story, apart from the legendary work he had done with his brother and the ABB. We fine tuned our live lineup and dialed in the right material, both originals and a lot of covers.

Of all the work we did together on stage, some of the most special moments were our duo acoustic sets. In fact, his 2nd to last performance onstage was a duo set we did at Red Rocks. You know a song is not just any work but a great song when you can strip it down to a voice and one or two instruments and it still resonates with the same power. That’s the kind of song Gregg wrote and that’s the kind of stories they told.

Since Gregg’s passing last weekend I have already been flooded with requests to honor his music in concert. We have been performing “Win Lose or Draw” for a few months now and occasionally we are throwing in a number here and there. But I wanted to save the opportunity to play his music, and some of the music we wrote or arranged together, for a solo acoustic show. Just myself, an audience of true fans and some stories from the road and songs to remember the man and our time together. All proceeds from this show will go to the Big House Museum in Macon GA. which has been so supportive of my work, both with Gregg, and my own band.

I feel that this is the best way to honor the spirit of a man who wanted nothing more than to write, play and travel the world with his music. A true journeyman who became a master and now lives on in our hearts as a legend. Come help us support his legacy for one night.

LIMITED TICKETS AVAILABLE: http://www.ticketfly.com/event/1501826-scott-sharrard-solo-acoustic-new-york/
Note: Each ticket purchase will include the commemorative poster above only available to benefit ticket holders.