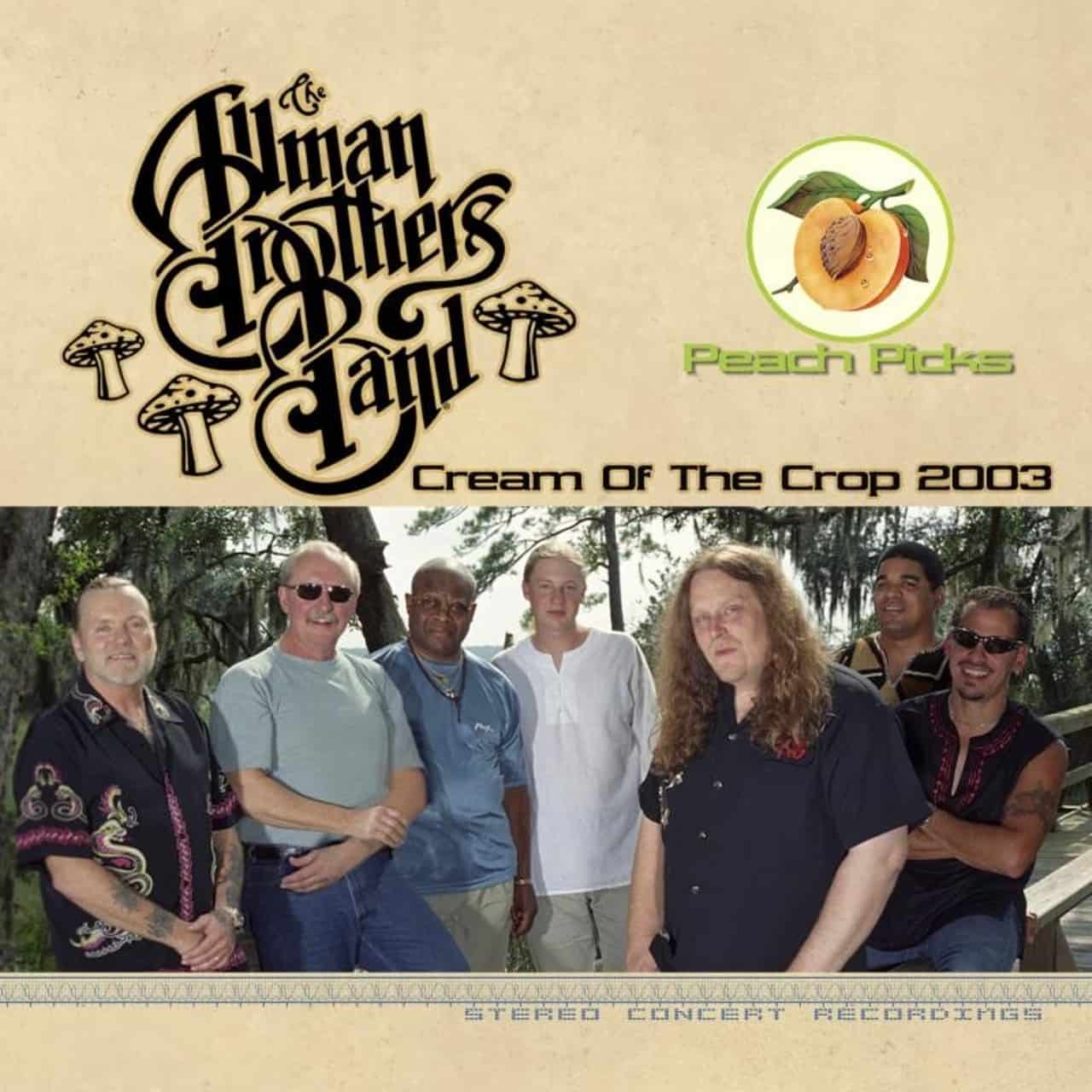 PEACH PICKS: CREAM OF THE CROP 2003: FOUR-DISC SET, OUT IN MAY, FEATURES
CURATED SELECTIONS FROM SIX SUMMER SHOWS

**Dedicated To The Memory Of Gregg Allman**

Fans of the Rock & Roll Hall Of Fame group THE ALLMAN BROTHERS BAND will be excited to hear Peach Picks: Cream Of The Crop 2003, a collection of the best performances culled from six shows in July and August 2003. Set for release May 16 via the band’s Peach Records (Orchard distribution), the collection includes 36 tracks recorded between July 25 and August 10, 2003 in Indianapolis, Pittsburgh, Darien Center, NY, Hartford, Charlotte and Raleigh, with no song repeated.

The ALLMAN BROTHERS BAND formed in 1969 and quickly became one of the most popular live bands in American rock music history, selling millions of records along the way. Hailed for their live improvisation and marathon performances, the group released the At Fillmore East album in 1971, and it’s still hailed as one of the best live albums ever. The group played its last live performance October 28, 2014, at New York’s Beacon Theatre.

The 2003 iteration of the ALLMAN BROTHERS BAND–founding members GREGG ALLMAN, JAIMOE and BUTCH TRUCKS plus WARREN HAYNES, MARC QUINONES, OTEIL BURBRIDGE and DEREK TRUCKS–would prove to be the longest-running line-up and most consistent in its live performances. The band had just released their first album in 10 years, the Grammy-nominated Hittin’ The Note and were in top shape. Guest musicians on four Cream Of The Crop 2003 songs include Susan Tedeschi, Karl Denson and Branford Marsalis.

Continuing the tradition of providing quality content for fans, Peach Picks: Cream Of The Crop 2003 will be available in an array of configurations. The full curated four-CD set will be offered, both physically and digitally. Each of the full six concerts will also be available for completists, and this marks the first time any of this music has been made available digitally.

Recorded for the then-nascent “Instant Live” CD series (fans picked up copies of the concert immediately after the show as they were being burned on CD), these shows capture the group at full throttle. For this collection, Warren Haynes serves as Supervising Producer, longtime manager Bert Holman as Executive Producer, with Bill Levenson and John Lynskey as Associate Producers. Haynes says, “That was an important time in the growth of that incarnation of the ABB. We had just released Hittin’ The Note and everybody was psyched to be playing a lot of new material from an album we all were very proud of and there was new life being breathed into a lot of the older songs.” “Warren was asked to oversee this release because he has a keen ear, a great memory for individual show performances and is a master at song sequencing,” says Holman. “The entire process went very well; we were all on the same page about what song should be included and in what order, and everybody in the band agreed with the final choices.”

Cream Of The Crop, like many Allman Brothers Band releases before, is dedicated to a recently lost Brother. This one is in honor of Gregg Allman 1947-2017.