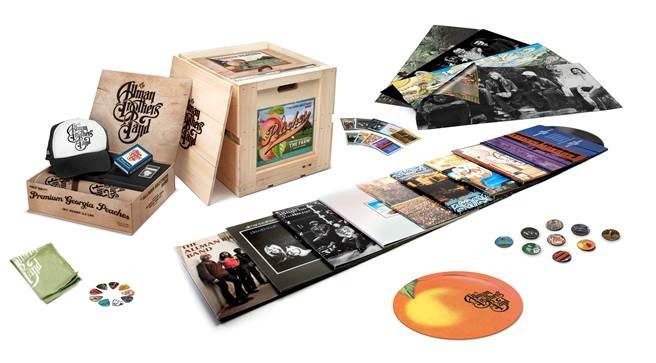 Los Angeles – May 24, 2016 Nine essential Allman Brothers Band albums, spanning 1969 to 1979, have been remastered from the original analog tapes for reissue on audiophile quality 180-gram vinyl on July 22 by Mercury/UMe. An expanded, 2LP edition of The Allman Brothers Band; 1LP Idlewild South; 2LP At Fillmore East; 2LP Eat a Peach; 1LP Brothers and Sisters; 1LP Win, Lose or Draw; 2LP Wipe the Windows, Check the Oil, Dollar Gas; 1LP Enlightened Rogues; and 3LP debut of Live At Ludlow Garage: 1970 are available now for preorder, individually and together in a special limited edition set, which presents the nine albums on 15 LPs with exclusive extras in a Georgia-style solid wood peach crate. Available exclusively here, the peach crate collection is limited to 500 sets worldwide. On the same date, the nine albums will be available for download purchase in high definition digital audio (192kHz/24-bit and 96kHz/24-bit).

About Direct Metal Mastering (DMM)
Direct Metal Mastering (DMM) is an analogue audio disc mastering technique jointly developed by two German companies, Telefunken-Decca (TelDec) and Georg Neumann GmbH. The audio signal is cut directly to a copper disc whereby the traditional analogue audio disc master cutting process is cut into a lacquer-coated aluminum disc. The key advantage to DMM is the copper master disc can be plated to produce the required number of stampers using a one-step process. Lacquer master discs require electroforming a master (“father”), “mother,” and then stampers, in what is known as the traditional “three-step process.” The DMM copper disc serves as the “mother,” which bypasses the silvering process and two electroforming stages, thus reducing the risk of introducing noise that can be generated in the traditional lacquer master process. The advantage of DMM over acetate lacquers are both sonic and practical because of the rigidity of the master disc medium and no groove wall bounce-back effects after cutting, all of which preserves the original modulation details in the groove walls, offering a better high end frequency playback and quieter surface noises.