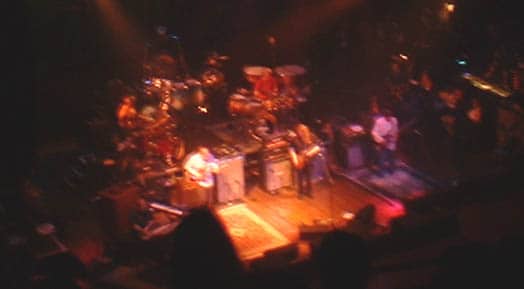 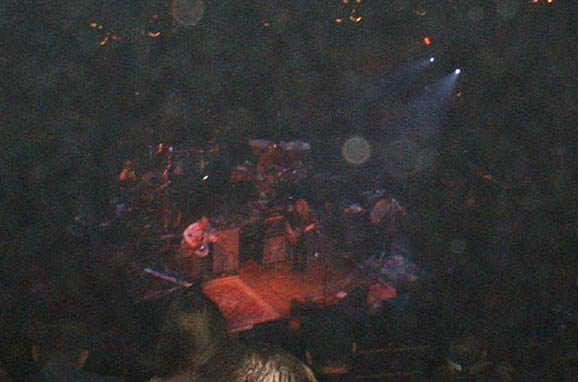 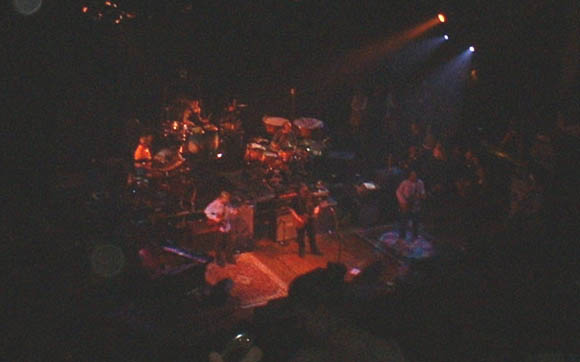 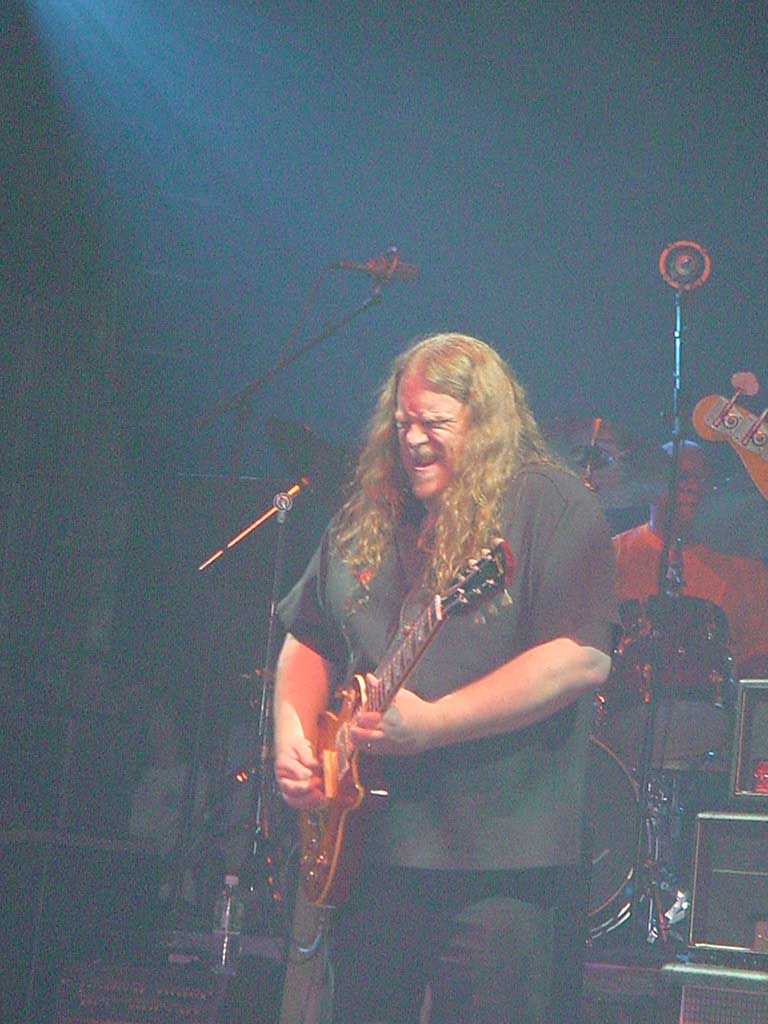 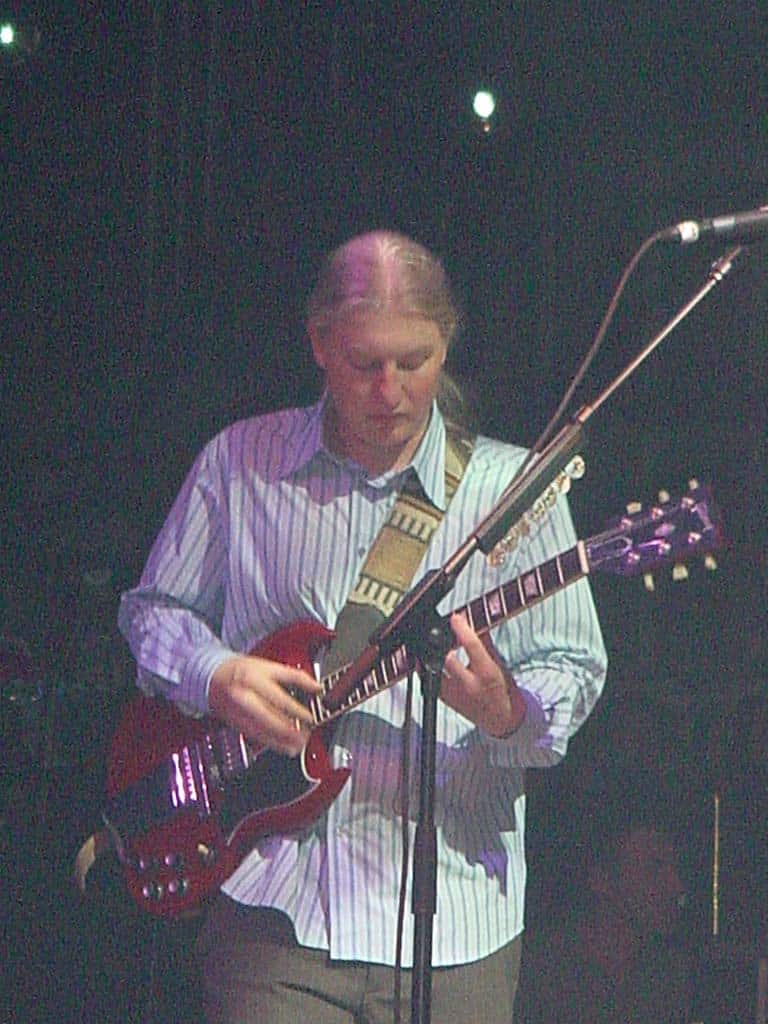 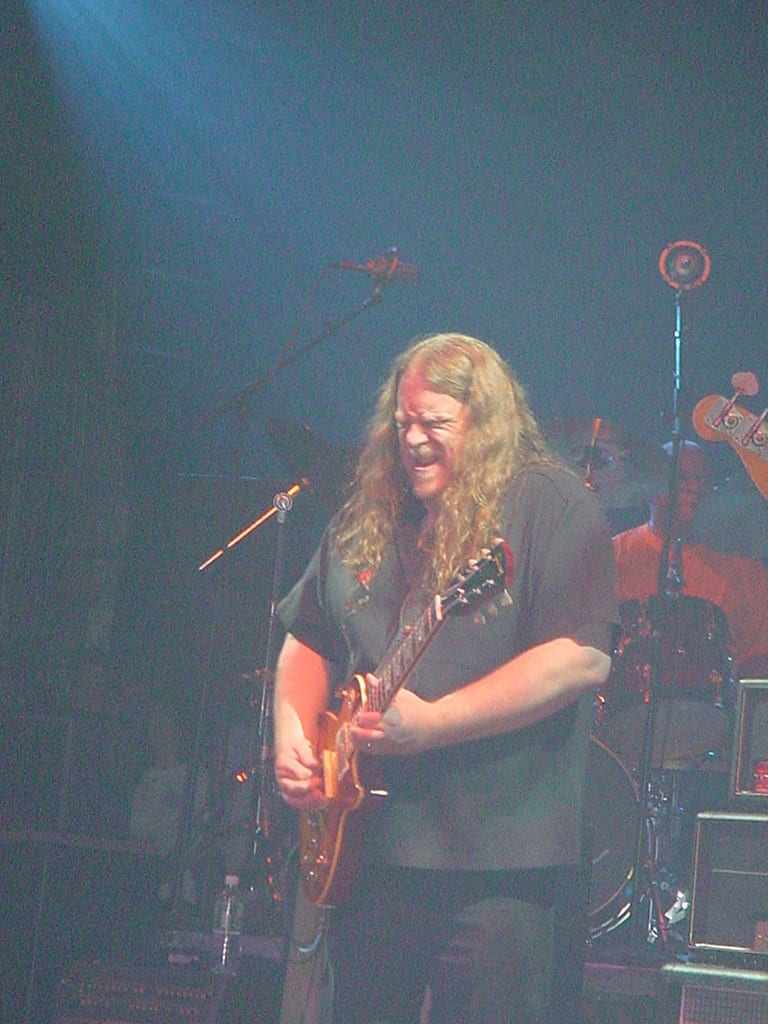 released on this day.

What a difference a day makes.

You really can’t tell by looking at the set list (unless you’re as big a sucker for “Afro-Blue as I am). But for some ineffable reason, tonight’s show was steeped in the mojo.

As the Sopranos theme fades, the band is making tuning noises that evolve into a spacy opening jam; Warren offers a distinct “Les Brers” tease.. Then they throw the switch on a spot-on “One Way Out,” with Warren lighting it up. Then the band eases into “Aint Wastin’ Time No More” like you ease into a hot bath. I’m running out of ways to say it– Derek played good. Then Warren. Warren played good too. Nice and good they played.

A brisk “Statesboro Blues,” then Warren launches into the opening blues lines of “Who’s Been Talkin'” before “Statesboro” has fully grinded to a close, playing with a stinging clarity. After an extended intro– with beautiful clear tone– Warren sings the vocals with authority. Derek plays a counter-melody to Warren’s soloing; then, with one extended note, Derek turns Warren’s blues playing on its side, and now its Derek’s Blues, something totally different and singular. Warren steps up and again cuts like a knife, then back into the vocals. There is an extended fade, the music growing soft– something they are doing more and more often– and Derek channels fusion playing over the band’s bluesy bed on the fade.

“Black Hearted Woman” is driving; then a change of pace to “Stormy Monday.” Warren shines as he takes the final solo; he is obviously feeling it tonight on the blues numbers, totally nailing every blues-based solo that comes around. Gregg turns in a nice vocal on “High Cost of Low Living,” with Derek putting the song to bed on his extended closing section. Warren steps to the Mic for a moving “Into the Mystic,” and the band closes the set with “Can’t Lose What You Never Had.” The guitarists play lovely harmony lines, then Warren shreds, again playing clean, driving blues. It is a nice, emphatic set closer. The set is well-paced, and even though it is markedly shorter than the night before, it has that special something going on. The band is totally in the groove, in the “now,” from start to finish.

A bouncy “Standback” opens the second set, again featuring nice work from Warren. Derek hits the mark on “Come and Go Blues,” then Warren follows and again is deep in the blues pocket. “Gambler’s Roll” features a gritty Gregg vocal and some soulful organ playing. Gregg’s organ provides the ideal lead-in for Derek’s lush notes on his solo.

The band flies through a big, sizzling version of “Hot ‘Lanta,” which gives way to “Rocking Horse.” Warren’s solo is almost a duet with Oteil, the two of them trading lines, squared off, leaning into each other. Warren brings his solo section to a crescendo with some fast chording. Then Derek immediately goes off in a Miles Davis kind of direction; his solo begins clearly inspired by the horn players he loves. He is playing over the band with an almost be-bop quality. Then, from nowhere, he totally de-constructs the song as he leans hard on a note while he de-tunes– warping, distorting the note that hangs in the Beacon air, twisting the song like a Mobeus strip. Then he pulls it back in and is off and running again, now in a more traditional vein. It is one of the most thrilling moments of improvisational guitar playing I have ever witnessed.

The closing note of “Rocking Horse” hangs in the air as the band begins anticipatory riffing. The jamming grows more defined and intense, Derek hinting tentatively at the “Afro-Blue” melody. Then the release comes as the guitars state the “Afro-Blue” theme in harmony. The theme gives way to a Derek solo,and Derek lets loose– I swear, he almost emotes on stage. I’m sure that he was grimacing on the inside; this was clearly his bag. On Warren’s solo, he again trades lines with Oteil; then Warren plays a line that is clearly a kick into hyperdrive, and Oteil instinctively knows to jump in WITH him and play together. Oteil propels Warren on, the band locks in with them. Then the song’s theme is re-stated as the drums come to the fore. Then the band winds down and we are into the drum solo. “Afro-Blue” appears to occupy its logical spot in the set– an “Elizabeth Reed” for the 21st century.

Out of the drums, Oteil offers a “Norwegian Wood” riff. Then Warren joins him and the two of them are improvising over the drums. Derek comes back on, tosses out another “Little Martha” tease (the third I recall hearing this run). Finally the full band is on stage and they dive headlong into “No One Left to Run With.” Gregg’s vocals re especially strong; the band slides into that Bo Diddley beat, and the guitarists toss in a little “Mountain Jam” tease before the song finishes.

For the encore, Oteil announces “Whipping Post” with a seat-shaking opening riff. The band races headlong through a version of the song that is sheer power and fury. Derek hits a big fat note that hangs in the air; then his solo hits the note as the Beacon is resonating.

Maybe it was the pacing. Maybe it was something in the water. Maybe it was the alignment of the stars. But tonight’s show– even though it was a little short– had the magic going on. Warren was smoking all night, especially every time there was a blues to be played. And Derek is just indescribable, melding classic jazz influences into the band’s sound. And as Butch noted in the guestbook on the band’s website, the experimentation with dynamics– the playing softly with intensity– continues, and it is thrilling to behold. It is as if the band has spent three years coming together, and now that they have it is time to grow. I did not see that coming. And the prospect is almost a little frightening.