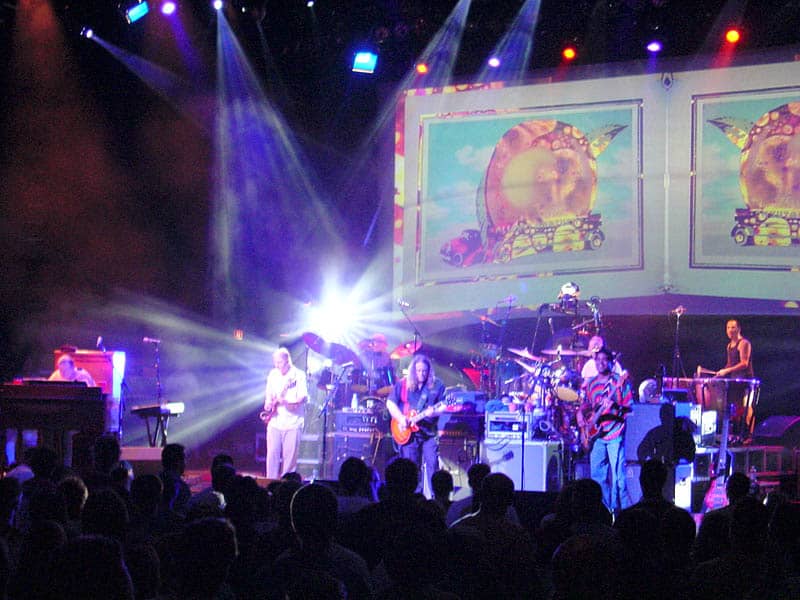 Well, let’s see, how do I write this without looking like an elitist snob…….hmmmmm. It was hard for me to go to my 37th ABB show (I think), and be objective. I can’t help but compare it to past shows, past setlists and past performers. I’ll try, though.
First off, I’ve never heard Warren play better. He exhibited some swing and finesse, not just hammer strength. I sometimes gripe about his lack of great solos in Mule shows, or his basic “melody” guitar in Phil Lesh’s band. Jimmy Herring being the more adventurous, risk-taking soloist. Last night, I thought Warren showed the whole repertoire. Very impressive. His Liz and Desdemona solos were sweet and powerful in the same song. Great stuff, very versatile. Also, he’s very much the band leader, taking Dickey’s old role (oops, better not mention that name) of guiding the jams.
Second, Gregg’s Old Before My Time vocals were fantastic, I’ve never heard him better. Powerful, without the raspy edge, except when he wanted to be.
Third, Wasted Words was super-funky right from Oteil’s bass intro to the trade-offs between Derek and Warren at the end. A real nice resurrection of an oldie.
Finally, Liz Reed, with Karl Denson on tenor and flute was fantastic. Warren lead thru a two-part intro, then into the song. First Derek, then Karl (taking the spot of Gregg’s solo), then Warren, and finally a nice Oteil spot. All were flying high.
Here’s where things bogged down for me. From here on, it seemed like all the air popped out of the bubble. Good Clean Fun was pedestrian, One Way was flat. Boom, they’re gone. After only 1:50 or so. I’m figuring, that’s OK, maybe Mountain Jam and then Whipping Post or Layla.
Derek comes out to start MtnJam, the rest kinda straggle on stage, very loose, unfocused at first. Derek did loose about his third decent solo of the night ( he really didn’t get enough space, in one man’s opinion), then Warren noodled for a while, but got it going later. Drums were lifeless, with Marc staying on tympani throughout the section, and then Oteil did sort of a prefunctory quickie solo. Boom, back into the melody. Couple more uninspired solos, wham, bam thank you ma’me. An Allman Bros show finished less than 2:20 after it started. Huh?! Ten minutes before curfew?!
Maybe it was the setlist. No Dreams, no Post, no Soulshine, no Rockin Horse, no Layla, not even a good slow blues guitar work-out.
Anyway, to sum up, good show by Warren, pretty good by the whole band thru Eliz Reed, after that. Pffffffft!
The music just didn’t take off and fly, except on Desdemona and Liz. There’s too much trading licks, “cuttin heads” you might say, and not enough of constructing a mood, reaching a musical destination. Kinda like somebody else used to do, at least 3/4 of the time in every show I ever saw. Oops mentioned that certain someone again, sorry.
End of sarcasm, end of tongue-in-cheek stuff. I’m sure if it was your first Allmans show, you thought it was great. Probably was! I just can’t help but think what might have been.
OK, I was always taught that if you criticize, offer constructive thoughts, too.
1) Play more of the older big-time Gregg songs, like Dreams and Whipping Post. There should never been an Allmans show without at least one of these.
2) Give Derek more space to get “out there”. He’s a phenomenon! Use it! No matter how good Warren plays, Derek’s style is more suited to that “moment”, “hittin the note”, transcending the audience, whatever you wanna call it.
3) Let Derek and Oteil take the band into a more jazz direction with their writing on future material. Turn ’em loose! Quit trying to exactly reproduce the “Allman Bros sound”.
Well, now, that all sounds pretty negative, but I’ll be at the Murat Theater in Indy at the end of the month. Let me reassure anybody who bothers to read this, there’s only one, or maybe two, other bands in the world I like near as much as the Bros. One’s the newest incarnation of Little Feat, and the other’s Dickey’s band. Oops I mentioned that person again, three strikes and I’m out. See ya in Indy. PS Thanks for the cd’s Bill.

I’d sure like a copy of the River Bend Show…I had to cancel out at the very last minute because of work….I was even born there.

Somebody throw me a line on a CD.
Peace!