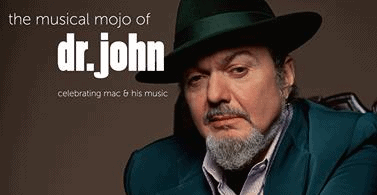 DR. JOHN’S LEGENDARY MUSICAL INFLUENCE TO BE HONORED AT ONE-NIGHT-ONLY CONCERT EVENT ON MAY 3 AT THE SAENGER THEATRE IN NEW ORLEANS

Dr. John Set to Take the Stage for Special Performances
Throughout the Evening

NEW ORLEANS, LA—March 5, 2014—On Saturday, May 3, 2014, esteemed musicians and friends will join together for “The Musical Mojo of Dr. John: A Celebration of Mac & His Music,” a special concert event taping honoring this musical icon in his hometown of New Orleans. Taking place at the historic Saenger Theatre in the French Quarter, the concert will pay homage to Dr. John’s illustrious songbook and feature once-in-a-lifetime collaborations from a lineup of prestigious and award-winning artists including Gregg Allman, Tab Benoit, Ryan Bingham, The Blind Boys of Alabama, Chief Monk Boudreaux, The Dirty Dozen Brass Band, Bill Kreutzmann, Chuck Leavell, Shannon McNally, Zigaboo Modeliste, Sarah Morrow, Cyril Neville, Anders Osborne, George Porter Jr., Mavis Staples, Allen Toussaint, Lucinda Williams, Irma Thomas, Jimmie Vaughan and Widespread Panic. Surprise special guests, along with additional performers, will be announced in the weeks ahead. This will be Dr. John’s only New Orleans performance during Jazz Fest, with the Rock and Roll Hall of Famer taking the stage to perform with a number of special guests throughout the night. Tickets for the 9 PM show will go on sale to the general public at 10 AM CT on Monday, March 10.

GRAMMY Award-winner Don Was will lead an all-star band and serve as the musical director. Keith Wortman created the concert event and will be the executive producer. The live concert event, “The Musical Mojo of Dr. John: A Celebration of Mac & His Music” will be filmed and recorded for multi-platform distribution.

“Dr. John transcends genres with a truly distinctive sound that embodies the rich musical heritage of New Orleans and has tremendously influenced the course of music history,” commented Don Was. “It’s an honor to be producing this extraordinary concert event honoring the legendary Dr. John. It is even more special to be doing it with this lineup of artists in the city that has been such an integral part of his life and music,” continued Keith Wortman.

Tickets go on sale to the general public starting 10 AM CT on Monday, March 10. Tickets are available at Ticketmaster.com and the Saenger Theatre box office (www.saengernola.com). The Saenger Theatre box office is open Monday-Friday 10 AM – 5PM and Saturdays by event. Tickets can also be charged by phone at 800-745-3000. A percentage of proceeds will benefit the New Orleans Musicians Clinic.

For more information about “The Musical Mojo of Dr. John: A Celebration of Mac & His Music” please visit: www.celebratedrjohn.com

About Dr. John:
Dr. John, a six-time GRAMMY Award-winning musician and Rock & Roll Hall of Fame inductee, is known throughout the world as the embodiment of New Orleans’ musical legacy and is a true American icon. His colorful musical career began in the 1950s when he wrote and played guitar on some of the greatest records to come out of the Crescent City. Some of his many career highlights include the masterful album Sun, Moon and Herbs (1971) which included cameos from Eric Clapton and Mick Jagger and 1973’s In The Right Place, which contained the chart hits “Right Place Wrong Time” and “Such A Night.” In 2013, Dr. John won his latest GRAMMY Award for Locked Down, a collaboration with Dan Auerbach of the Black Keys. As further evidence of his musical diversity, Dr. John is currently completing an album in tribute to Louis Armstrong, which will be released in June of this year. After a half century of creating music for himself and others, Dr. John continues to write, arrange, produce and interpret with a passion that has yet to wane.

About Executive Producer Keith Wortman:
Keith Wortman is the president of Blackbird Production Partners. He is also the co-founder and former CEO of Cambio.com, a leading online entertainment network with over 4 million monthly unique visitors and over 25 million monthly page views. Cambio.com is now owned by AOL Inc. Prior to this, he was the President of MGX LAB, a leading digital media, brand strategy and business development agency whose clients included Fortune 500 companies, major sports leagues, major records labels, artist management firms and media companies. Under his leadership, MGX earned multiple Webby Award nominations and was a 2010 Webby Award winner for its digital media innovation and marketing campaign for Brad Pitt’s Make It Right New Orleans. Most recently, he produced the concert event, broadcast, and music release “We Walk The Line: A Celebration of the Music of Johnny Cash,” which was broadcast nationally on PBS and released on CD/DVD/Blu-Ray by Sony Music Entertainment; the benefit concert, broadcast, and music release “Love For Levon,” which was broadcast nationally on PBS & AXS TV and released on CD/DVD/Blu-Ray by Time Life; and the concert event “All My Friends: Celebrating the Songs & Voice of Gregg Allman,” which will have its broadcast premiere and music release in May 2014.

About Musical Director Don Was:
Don has earned recognition as one of the top record producers in the music industry, having worked with an array of artists including: The Rolling Stones, Bob Dylan, Bonnie Raitt, Al Green, Garth Brooks, Iggy Pop, Willie Nelson, Jackson Browne, Brian Wilson and Johnny Cash to name a few. He has earned a GRAMMY for Producer of the Year as well as a BAFTA for Best Original Score. Most recently he was appointed President of legendary jazz record label, Blue Note Records.