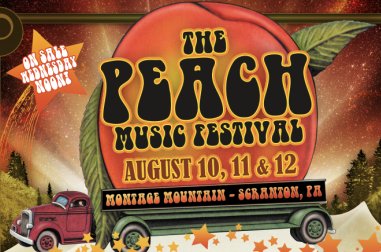 The ALLMAN BROTHERS BAND wrapped up the last leg of their 2012 tour as hosts of the first-ever PEACH FESTIVAL this past weekend (Aug. 10-12) in Scranton, PA with 24 acts on two stages. Other headliners of the three-day event included ZAC BROWN BAND, O.A.R., DARK STAR ORCHESTRA, THE WAILERS and ALLMAN BROTHERS BAND members’ groups including WARREN HAYNES BAND, TEDESCHI TRUCKS BAND and JAIMOE’S JASSSZ BAND.

Fans camped around Scranton’s Sno Mountain and enjoyed the water park and bucolic summer weather for the area’s first-ever three-day music festival that included camping. “We’ve been looking for a great location up north to play that would enable our fans to have a camping weekend similar to our April Wanee Festival in its’ 8th year in Live Oak, Florida, and when Toyota Pavilion on Montage Mountain was proposed we jumped for it having played there 8 times in the past 15 years,” says ALLMAN BROTHERS BAND manager Bert Holman. “We plan on a second Peach Festival somewhere in the Northeast next year.” The ABB teamed up with Live Nation’s Geoff Gordon for the event, which drew approximately 30,000 fans over three days. Geoff noted, “Fans traveled from all over the U.S. and enjoyed a fantastic weekend of music in a truly beautiful setting.”

Brad Patton of the Wilkes-Barre Times-Leader reviewed all three days of the event, citing the ALLMAN BROTHERS BAND and Zac Brown Band’s sets as highlights. Of Friday night’s Zac Brown set, he said they “proved a hard act to follow. From opener ‘Keep Me In Mind’ to ‘Chicken Fried,’ the last tune of a four-song encore, guitarist Brown and his cohorts were on fire. The group’s two hours on stage were one highlight after another, whether playing its own hits such as ‘Toes,’ ‘Colder Weather,’ or ‘As She’s Walking Away,’ or a generous amount of cover tunes including spectacular versions of The Band’s ‘The Night They Drove Old Dixie Down,’ Marshall Tucker Band’s ‘Can’t You See’ (both sung by multi-instrumentalist Clay Cook) and ‘The Devil Went Down To Georgia,’ which showcased fiddler Jimmy De Martini.”

The ALLMAN BROTHERS BAND launched their late-night, two-hour set just before 1:00 AM Saturday morning, with the Times-Leader saying, “Then it was time for the Allman Brothers Band, the festival’s hosts, who wasted no time before kicking in a great version of ‘Statesboro Blues.’ 1994’s ‘No One To Run With’ was an early standout, as was ‘Midnight Rider.’ [Warren] Haynes led the band on a wicked ‘The Sky Is Crying’ and the group hit its stride on a 12-minute epic ‘Dreams’ and the instrumental ‘Jessica,’ which ended the main set. The two-song encore was capped by a divine version of ‘Southbound,’ as the first evening came to a close at 2:40 a.m…Saturday’s encore was a majestic, 13-minute version of ‘Whipping Post,’ which was a fitting way for the band to end its festival.”

Of the PEACH FESTIVAL overall, the Times-Leader said “After seeing, hearing and witnessing everything the Peach Music Festival had to offer, let’s hope it was not one-of-a-kind.”

The ALLMAN BROTHERS BAND will wrap 2012 with one more show headlining The Bluesmasters Concert at Haymarket Park, August 31 in Lincoln, NE.