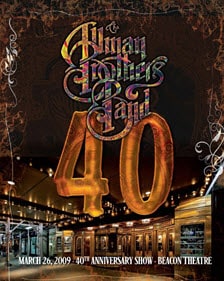 RECORDED MARCH 26, 2009 AT THE BEACON THEATRE,
“40” CELEBRATES THE 1969 DAY
THE ORIGINAL BAND FIRST PERFORMED TOGETHER;

LIVE PERFORMANCES TO RESUME THIS WEEK AT WANEE FESTIVAL

The ALLMAN BROTHERS BAND’s annual run of shows at New York City’s Beacon Theatre is always magical, but 2009’s 40th anniversary run was unique, with over 60 guests sitting in with the band. But on March 26, 2009–the 40th anniversary of the original lineup’s first performance–the band honored the legacy with a show that belonged to the Allman Brothers Band, and no one else. That special night, where they played their first two albums in their entirety, back to back, was filmed and is being released on DVD as 40, out April 30 via the band and EOne Entertainment.

Pre-order at Hittin’ The Note

The original group–DUANE ALLMAN, GREGG ALLMAN, DICKEY BETTS, BUTCH TRUCKS, JAIMOE AND BERRY OAKLEY–first played together 3/26/69 in Macon, GA, and quickly became one of the biggest rock acts in the world before the losses of DUANE ALLMAN and BERRY OAKLEY, and subsequent turmoil and break ups, before triumphantly returning for good in 1989 (eventually being inducted into the Rock & Roll Hall of Fame and being awarded a Grammy Lifetime Achievement Award). The current band–founding members GREGG ALLMAN (vocals and keyboards), BUTCH TRUCKS (drums and tympani) and JAIMOE (drums) plus longtime members WARREN HAYNES (vocals, lead and slide guitar), DEREK TRUCKS (slide and lead guitar), OTEIL BURBRIDGE (bass) and MARC QUINONES (congas and percussion)–decided to honor the original six by playing the group’s first two albums–The Allman Brothers Band and Idlewild South–back to back, track by track.

This historic show captures the band at a very powerful height, as this incarnation of the ABB had played together over 12 years, and were certainly comfortable at the Beacon, a venue they have performed at over 230 times. The group tore through their first two albums with spirit and fire, proving that they are one of the greatest rock bands of all time. Like a tiger unleashed from a cage, the band pounced from the opening moment of “Don’t Want You No More/Not My Cross to Bear,” and the power and fury only went up from there. Seven men were playing as one, each feeding off the energy from the others, communicating in a non-verbal, mutually understood musical conversation. Just a glance of the set list reads like a canon of classic American rock: “Trouble No More,” “Dreams,” “Whipping Post,” “Revival,” “Midnight Rider,” “In Memory of Elizabeth Reed.”

On the current live front, the Allman Brothers Band are set to return to the stage April 11 in Live Oak, FL at the 10th installment of their annual Wanee Festival. Singer Gregg Allman has recovered from the bout of bronchitis that forced the band to postpone four Beacon Theatre performances in March. “I feel almost 100% following my bout with Bronchitis,” Allman said recently. “I look forward to seeing the Allman Brothers Band fans at the Wanee Festival April 10-12, as well as I cannot wait for my first trip to Australia with my solo band to meet my down under fans.”

Upcoming tour dates are below: