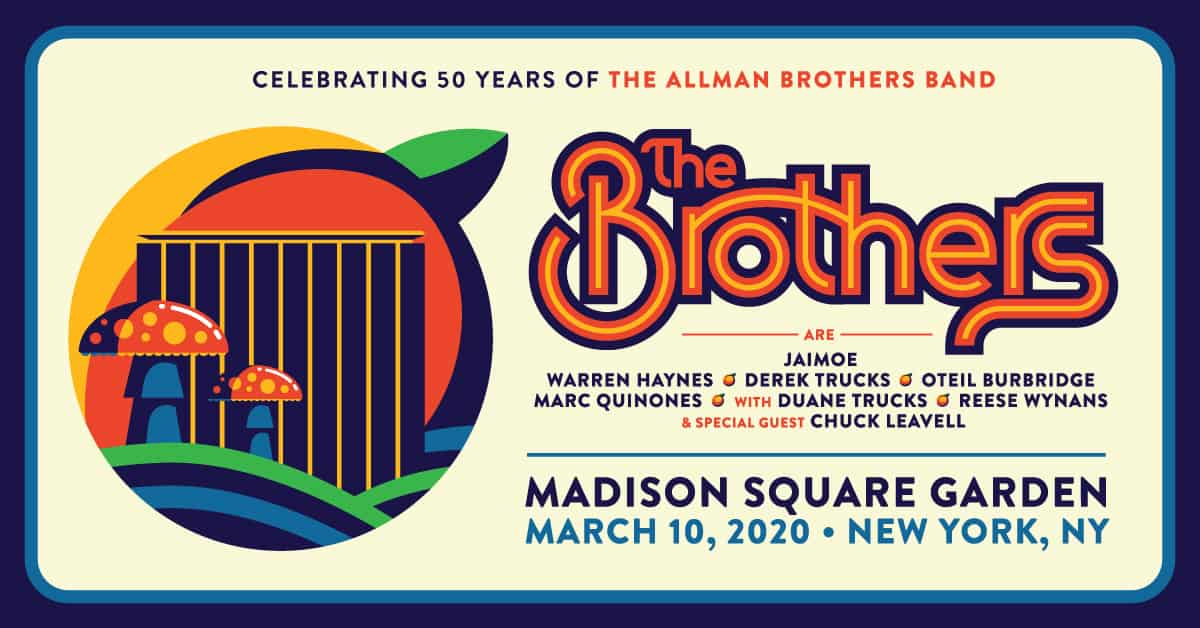 CELEBRATING 50 YEARS OF THE MUSIC OF THE ALLMAN BROTHERS BAND

The Brothers – Celebrating 50 Years of the music of The Allman Brothers Band will perform at Madison Square Garden in New York City for one night only March 10, 2020. The Brothers—Jaimoe, Warren Haynes, Derek Trucks, Oteil Burbridge, Marc Quinones—will be joined by Duane Trucks and Reese Wynans and special guest Chuck Leavell. Ticket presales begin on January 7, with public on sale on January 10 via Ticketmaster (click here).

This one-time concert event, produced by Live Nation, will be a celebration of The Allman Brothers Band’s illustrious career. It notably marks the first time in more than five years that these legendary players will be together on stage to perform their iconic hits, and the first time since the passing of founding members Gregg Allman and Butch Trucks. It will undoubtably be emotionally charged, and an unforgettable night not to be missed.

“I can’t wait to play again with my Brothers.”
–Jaimoe

“From the Fillmore East to the Beacon, NYC has always been a spiritual home for the Allman Brothers. So it only feels natural to honor uncle Butch, Gregg, Berry, Duane and all the other brothers and sisters we have lost along the way here at MSG. I’m excited to get to play these songs with Jaimoe and the Brothers one last time to celebrate 50 years of this music.”
–Derek Trucks

“Hard to believe it’s been five years since our final show at the Beacon. We had all talked about doing a final show at Madison Square Garden which never came to fruition. What a great way to honor 50 years of music and fulfill that wish at the same time.”
–Warren Haynes

“I was fortunate enough to be a part of the Allman Brothers Band’s history for 23 of the 50 years we are about to celebrate. Thank you Butch, Gregg, Jaimoe, Dickey as well as Duane and Berry for giving us the opportunity to play this amazing music for all of our diehard, loyal fans.”
–Marc Quinones

“I’m so glad to get the chance to pay tribute to 50 years of the enduring music of the Allman Brothers Band. I’m blessed to have been a part of their story. It’s gonna be a night to remember.”
–Oteil Burbridge

The Rock & Roll Hall of Fame group formed in 1969 and quickly became one of the most popular live bands in American rock music history, selling millions of records along the way. Hailed for their live improvisation and marathon performances, the group released the At Fillmore East album in 1971, and it’s still hailed as one of the best live albums ever.

The 2003 iteration of The Allman Brothers Band—founding members Gregg Allman, Jaimoe and Butch Trucks plus Warren Haynes, Marc Quinones, Oteil Burbridge and Derek Trucks—would prove to be the longest-running line-up and most consistent in its live performances. The group played its last live performance October 28, 2014, at New York’s Beacon Theatre. Of that night—which was the last of over 230 sold-out shows covering 25 years of spring residencies at the Beacon—Rolling Stone’s David Fricke said “it will take more than a peach to get me through next March. It was never spring, I always said, until I saw the Allmans peakin’ at the Beacon. Tonight was a generous, continually thrilling farewell. It will make the leaving that much harder to bear.”

Joining The Brothers for the 3/10/20 event will be keyboardist Reese Wynans (who played in the Second Coming with future ABB founding members Dickey Betts and Berry Oakley, and was a part of the early 1969 jam sessions which led to the formation of ABB) and Duane Trucks, Derek’s brother (and current drummer for Widespread Panic). Chuck Leavell joined ABB in 1972 (following Duane Allman’s passing) and played with the group until a hiatus in 1976; he’s been with the Rolling Stones since 1981.

Portions of the proceeds will benefit The Big House in Macon, GA which was the band’s home from 1970-1973 and now serves as their official museum.