Live music is back and we’re heading to Montage Mountain for The Peach Music Festival on July 1-4 in Scranton, PA.

Tix are on sale now! See you at The Peach!

Thank you again for your support in helping us bring back live music so soon. We can’t wait to see you at The Peach! 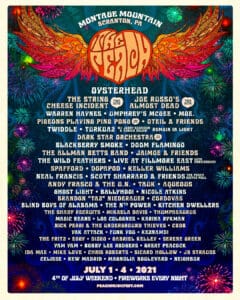 (Scranton, PA – May 14, 2021) – “The Road Goes on Forever.” Live Nation, along with the Allman Brothers Band, today revealed the lineup for the 10th installment of the Peach Music Festival, the first live four-day music and camping festival of 2021, coming to Montage Mountain in Scranton, PA, from Thursday, July 1 through Sunday, July 4.

Oysterhead (featuring Trey Anastasio of Phish, Les Claypool of Primus and Stewart Copeland of The Police) will headline the Peach Music Festival which also features Joe Russo’s Almost Dead featuring Oteil Burbridge on bass, String Cheese Incident, and Pigeons Playing Ping Pong, all performing two sets. In addition, Turkuaz will pay tribute to the Talking Heads’ masterpiece Remain In Light by performing the album in its entirety with special guests Jerry Harrison, of the Talking Heads, and Adrian Belew.

The Festival’s founders, the Allman Brothers Band, are well represented in this year’s lineup. Founding member Jaimoe, longtime guitarist Warren Haynes, and bassist Oteil Burbridge will all perform sets. In addition, both Devon Allman and Duane Betts will perform with their group, the Allman Betts Band. There will also be a special performance of the Allman Brothers’ legendary Live at Fillmore East which is celebrating its 50th anniversary on July 1, 2021.

Additional artists will be announced.

To purchase tickets, reserve travel packages, camping, glamping tent, and RV passes or for the most up-to-date information on the Peach Music Festival, including additional artist announcements, visit ThePeachMusicFestival.com. and follow on Facebook/ThePeachMusicFestival and on Twitter @PeachMusicFest.

In addition to the four days of live music with over 50 artists, this one-of-a-kind experience features food and craft vendors on the grounds and access to the scenic Montage Mountain Ski Resort’s large water park.