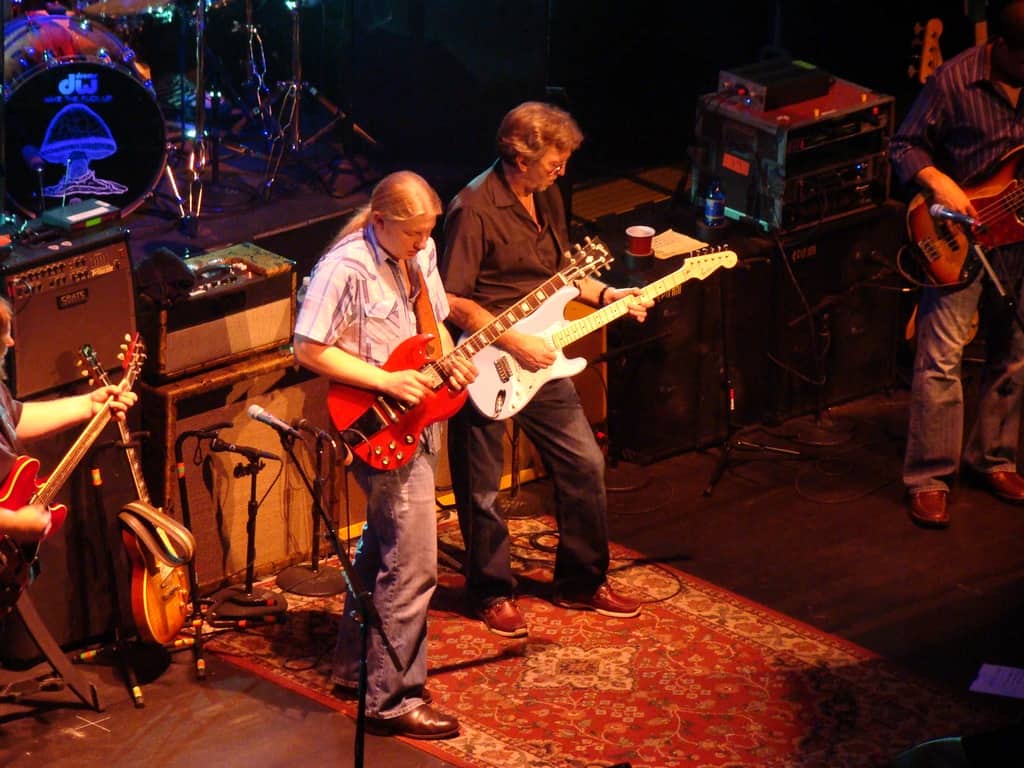 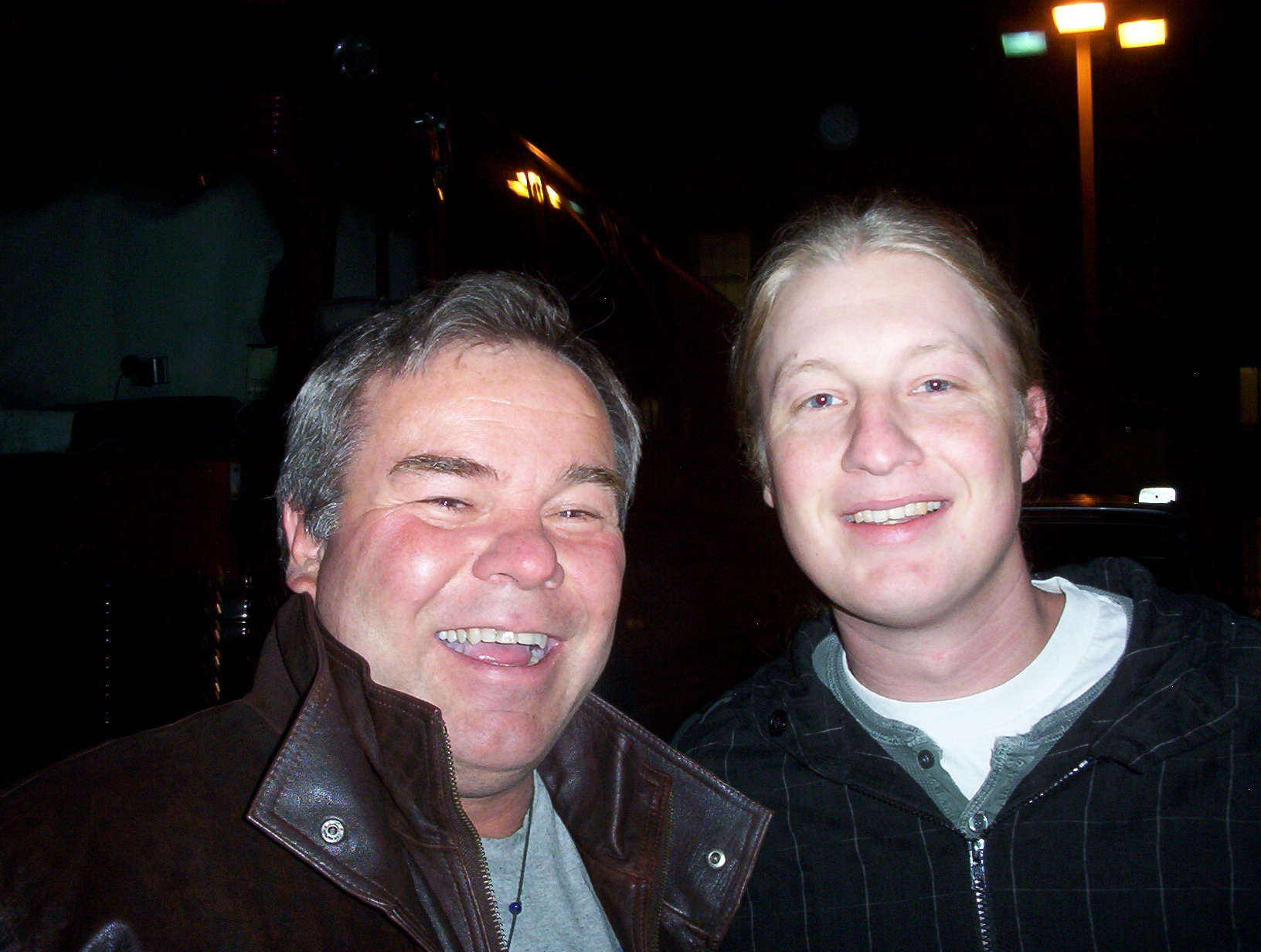 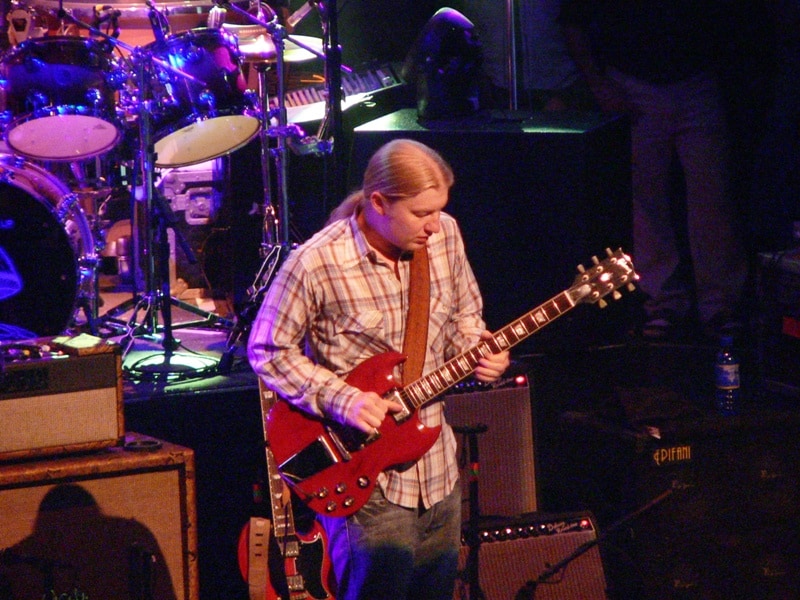 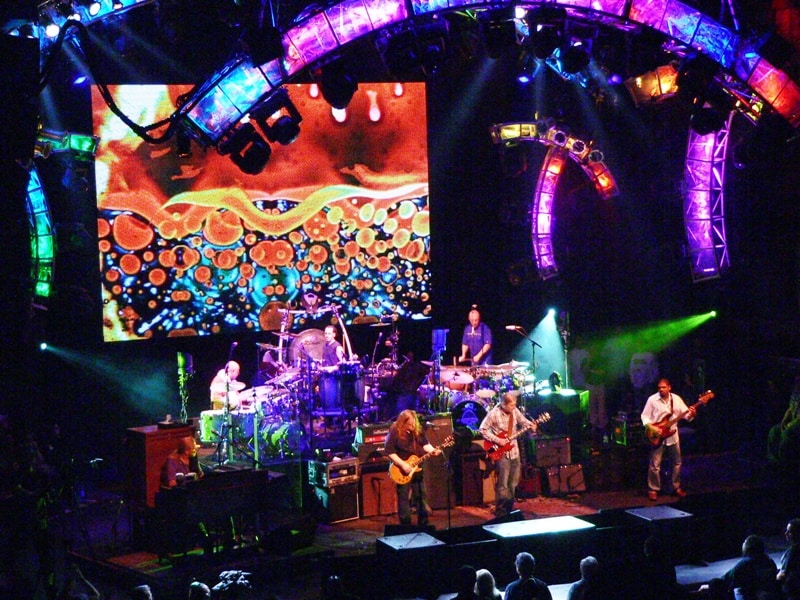 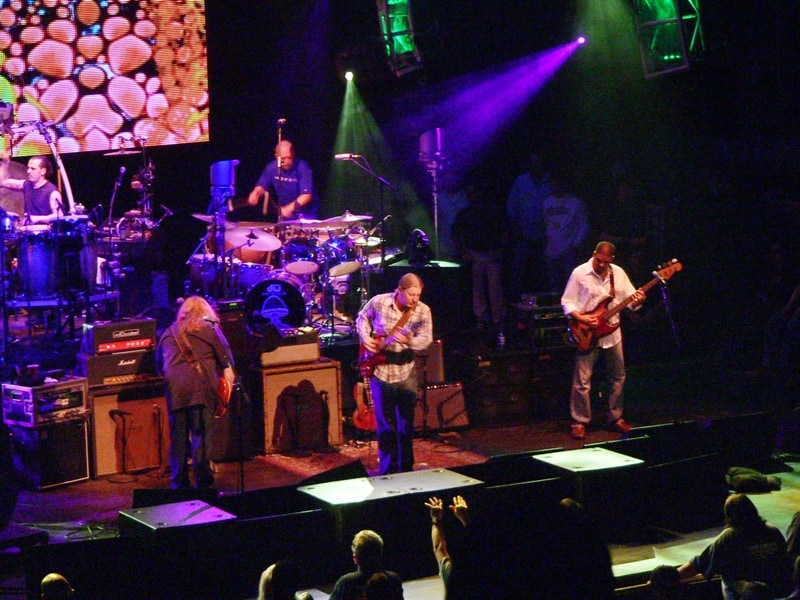 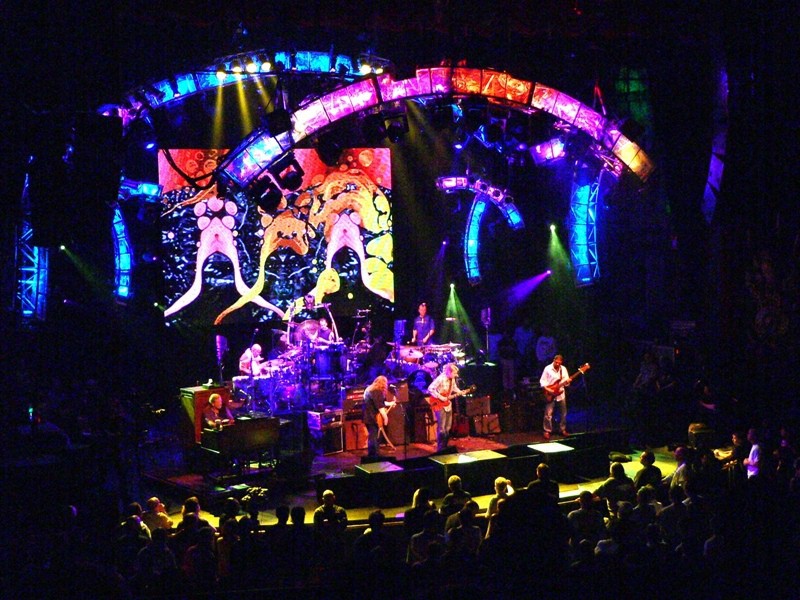 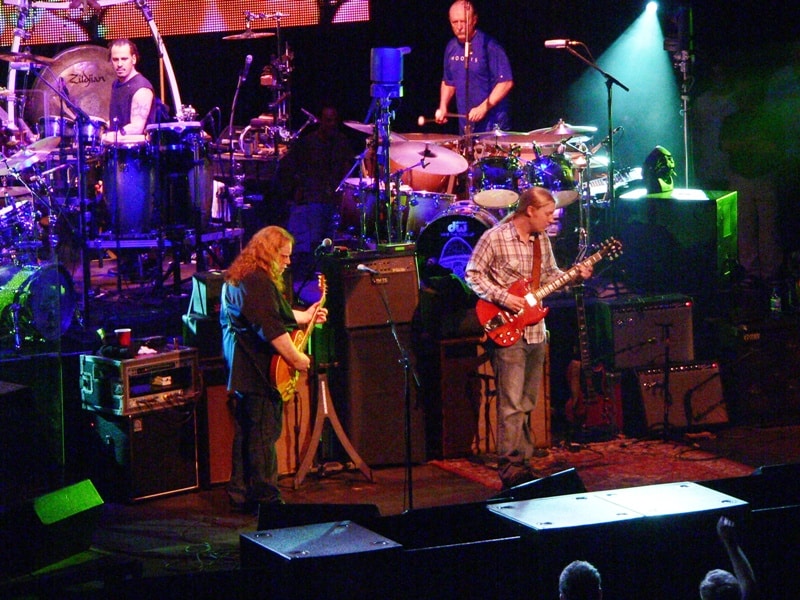 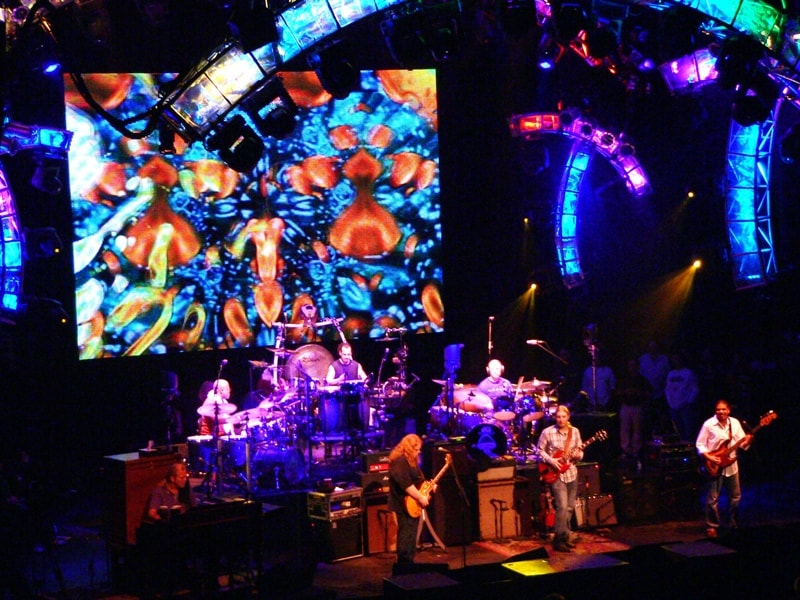 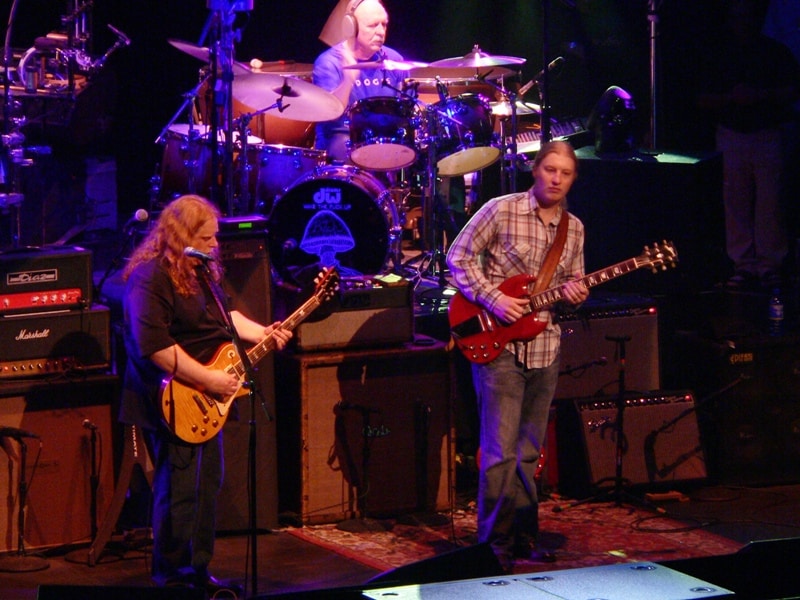 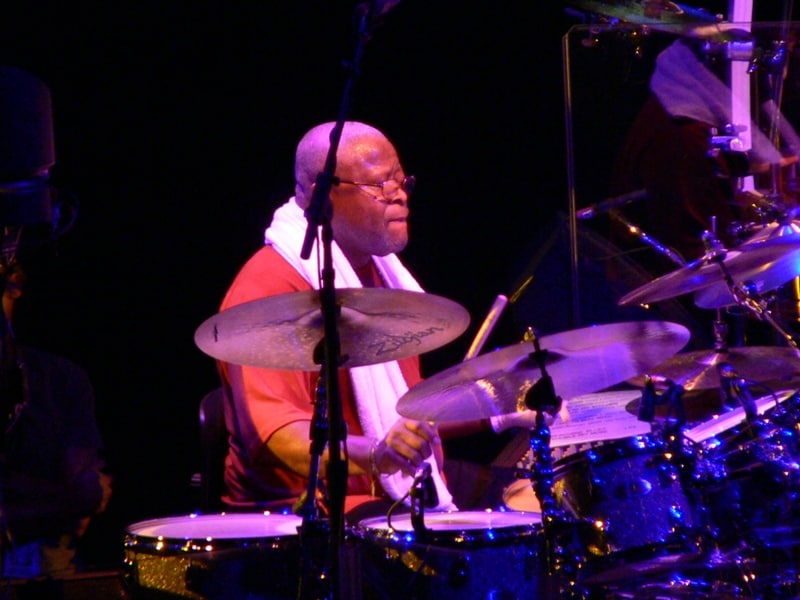 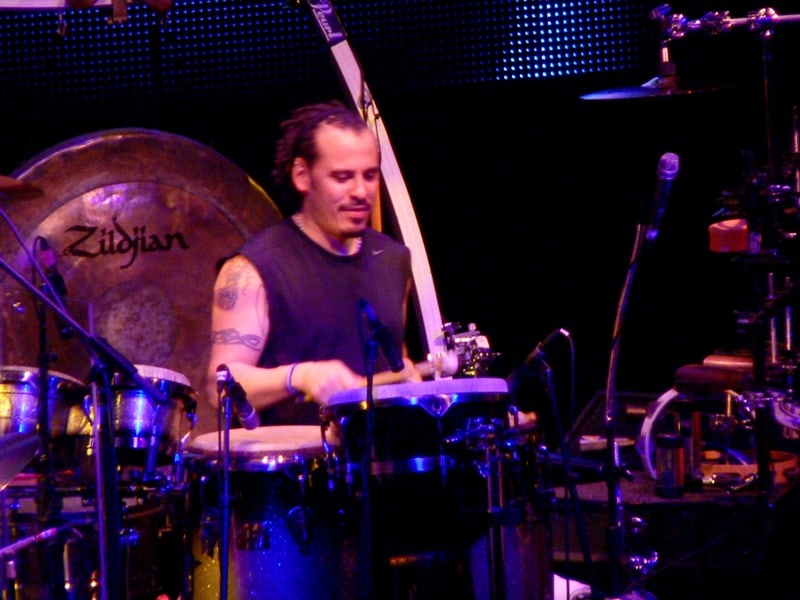 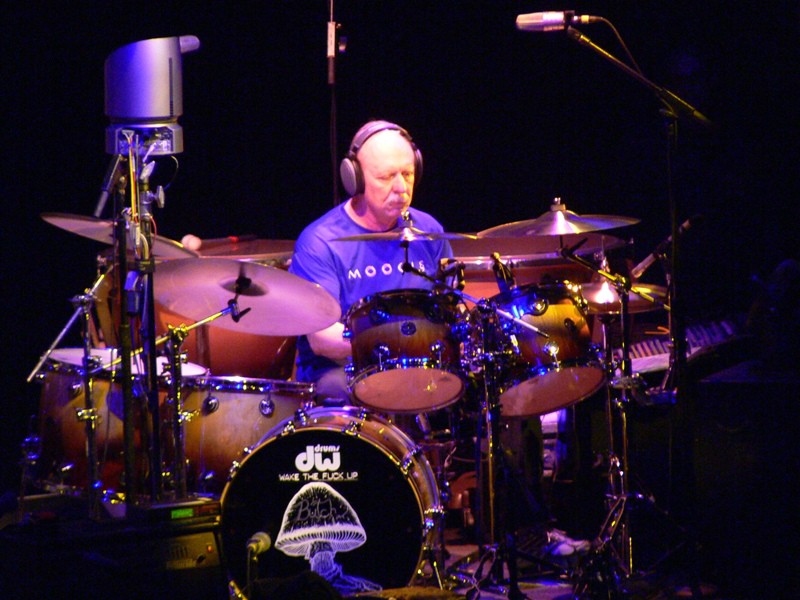 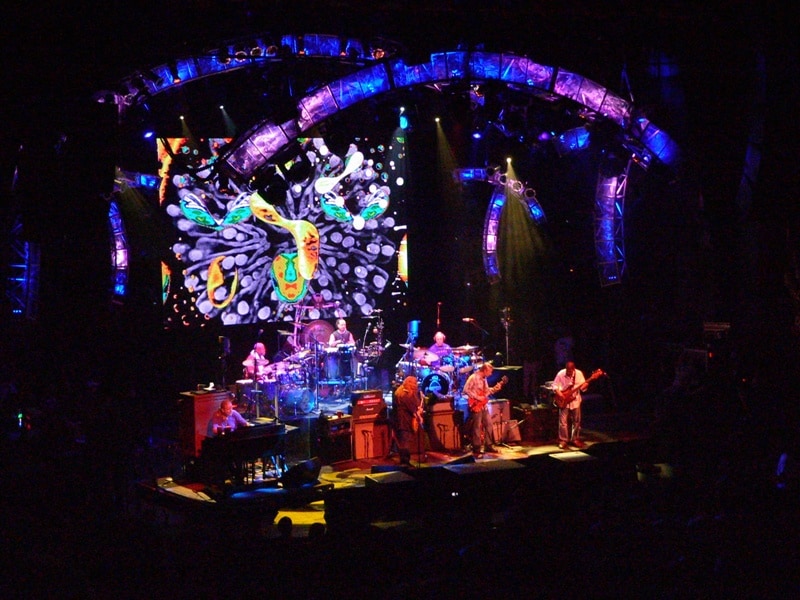 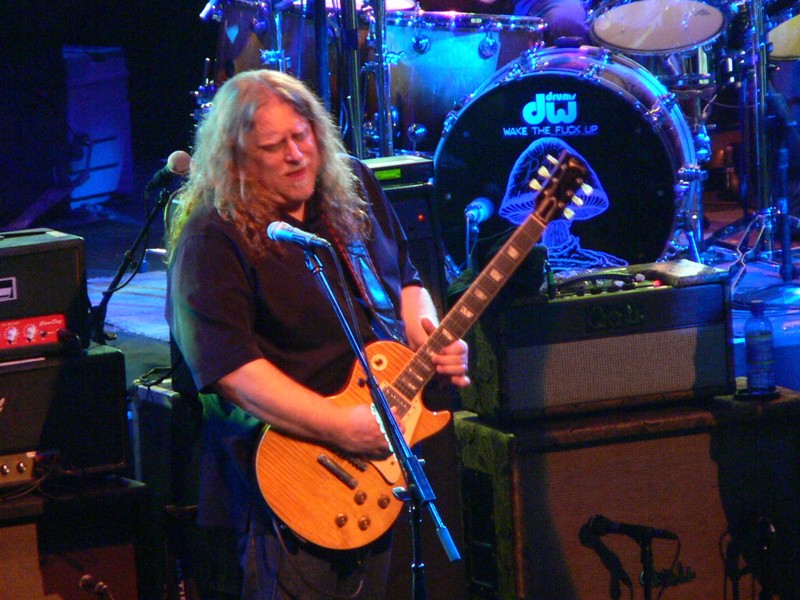 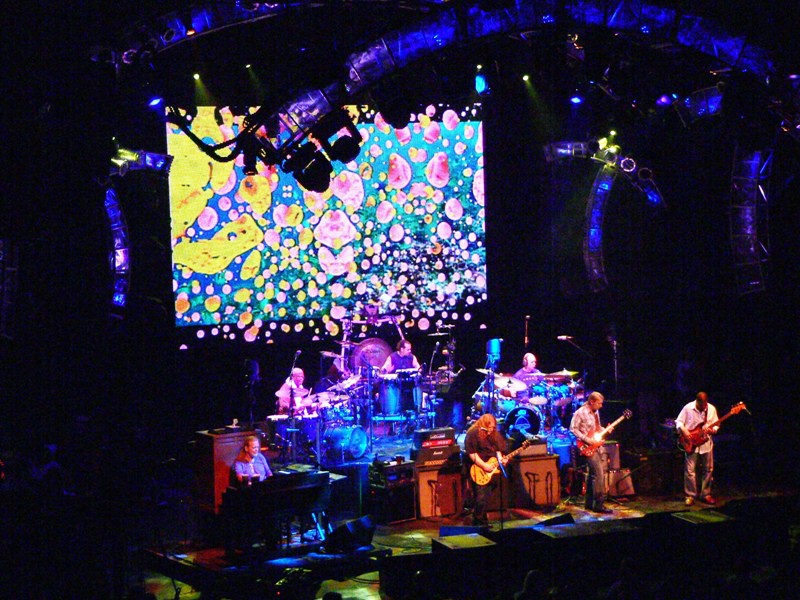 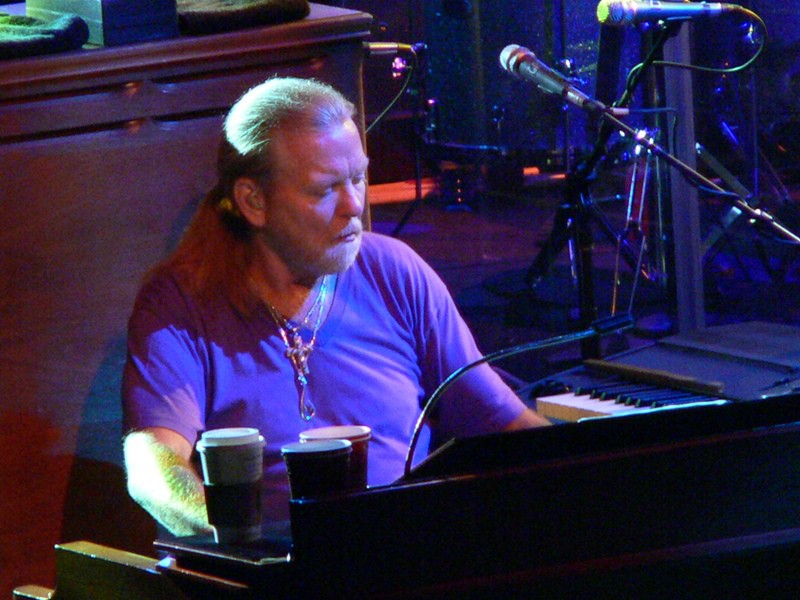 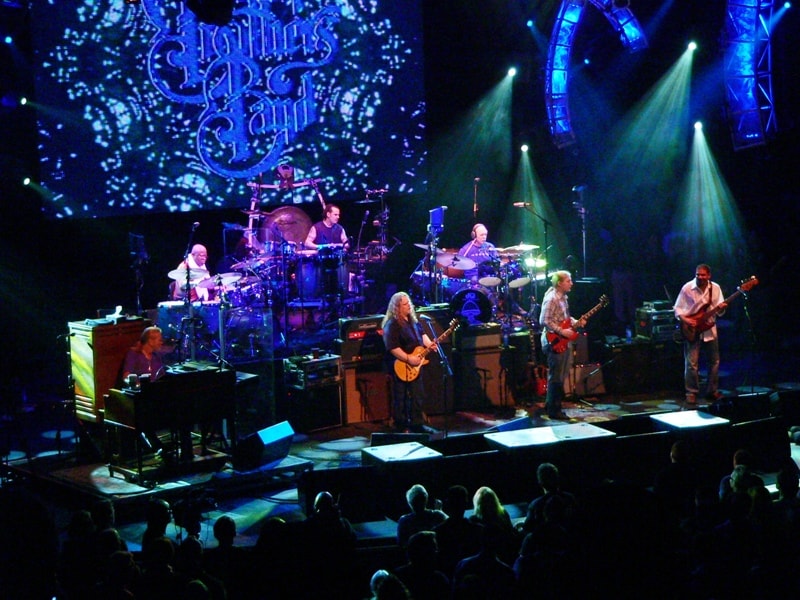 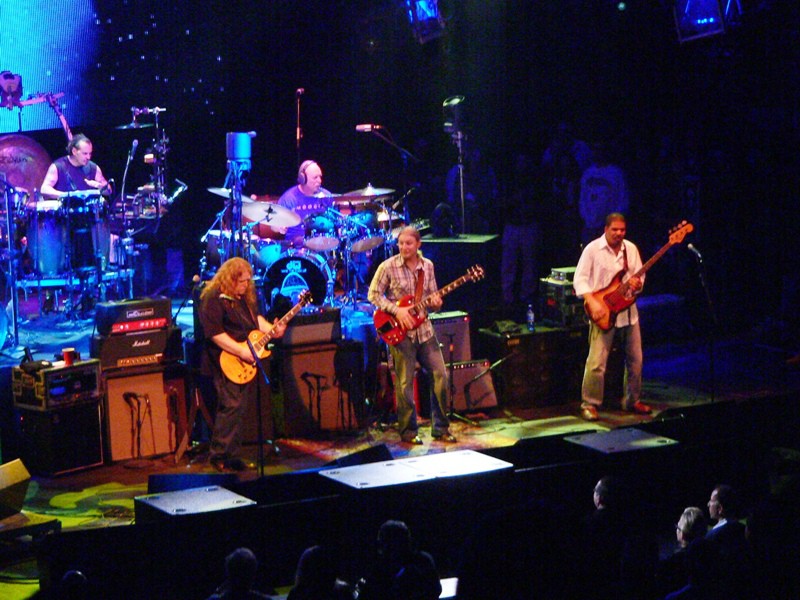 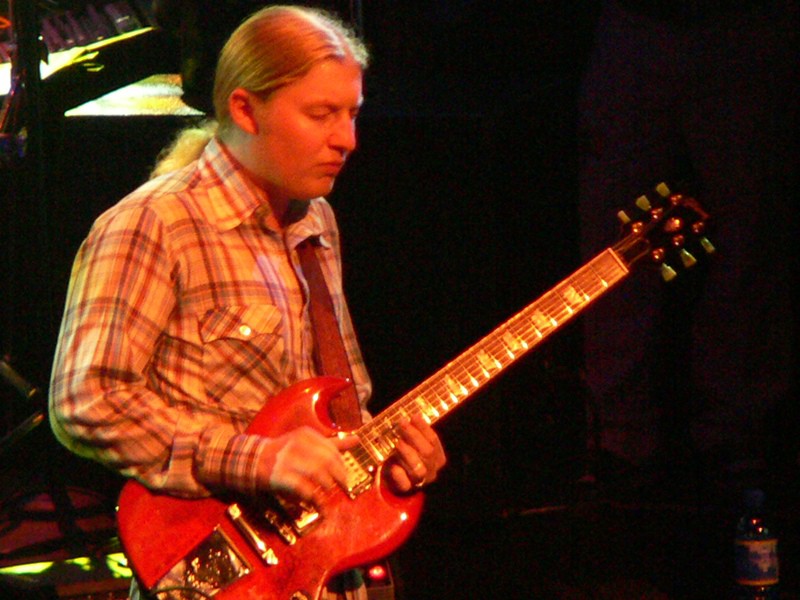 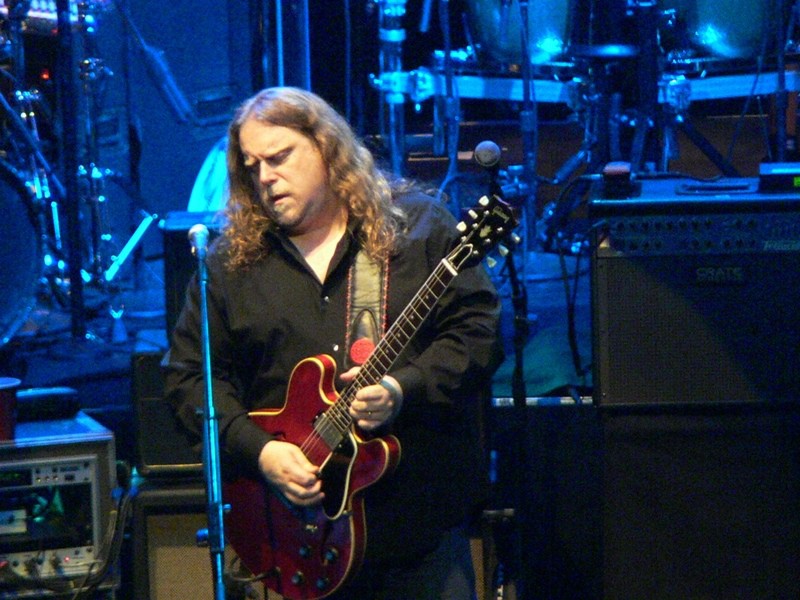 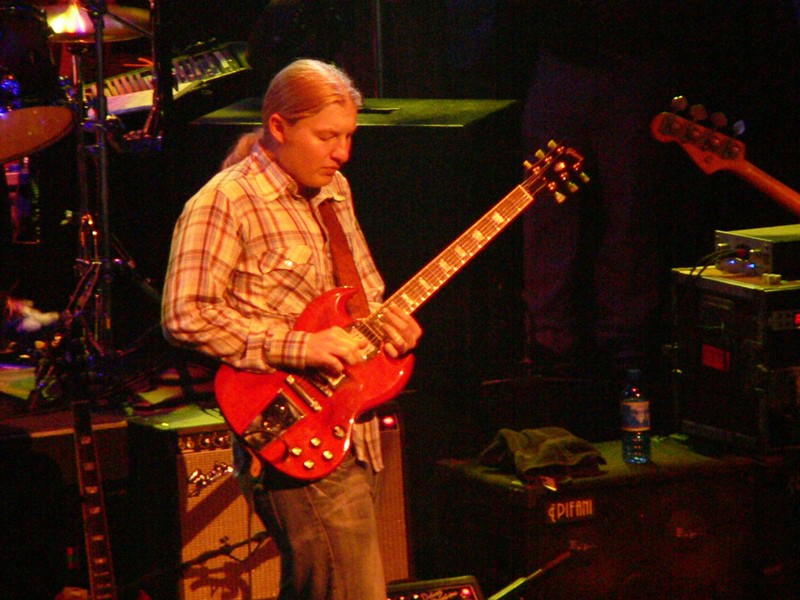 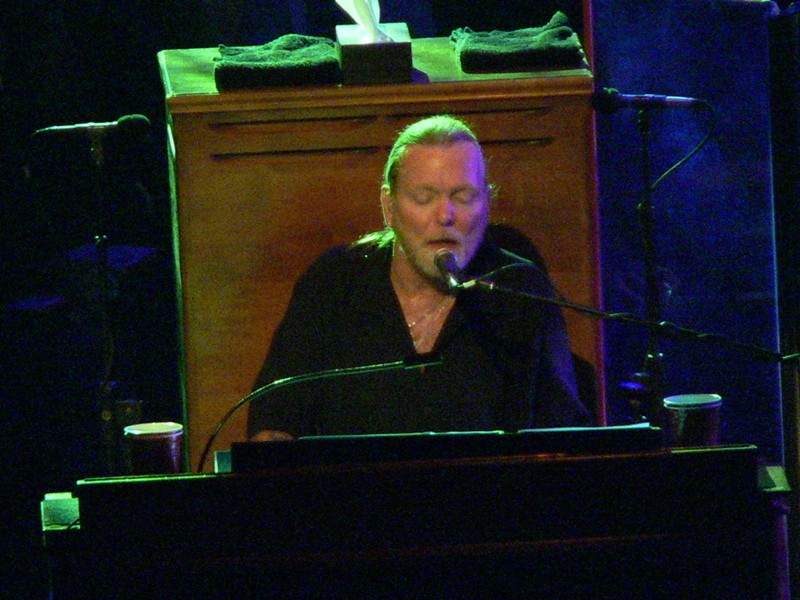 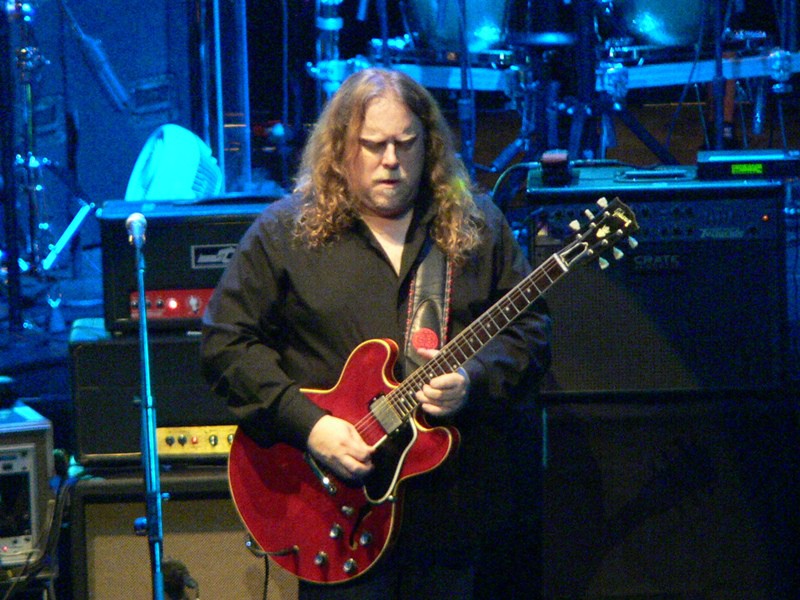 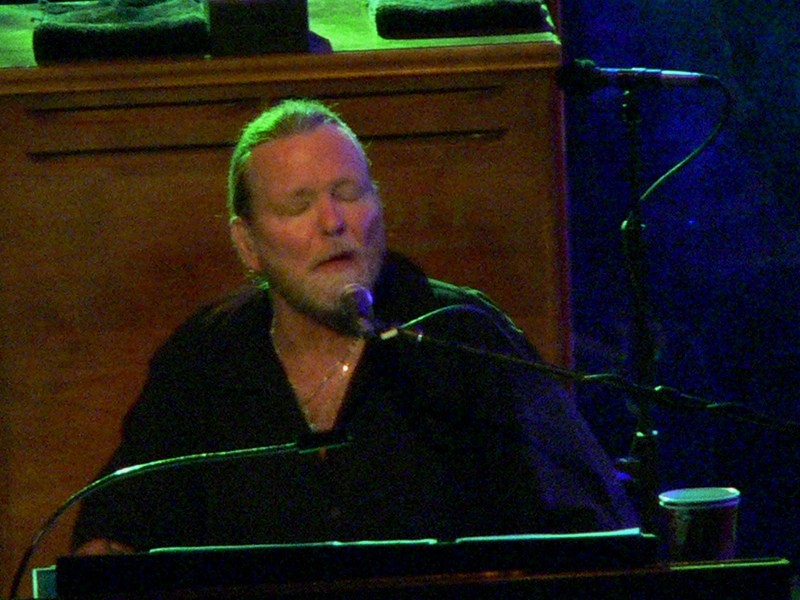 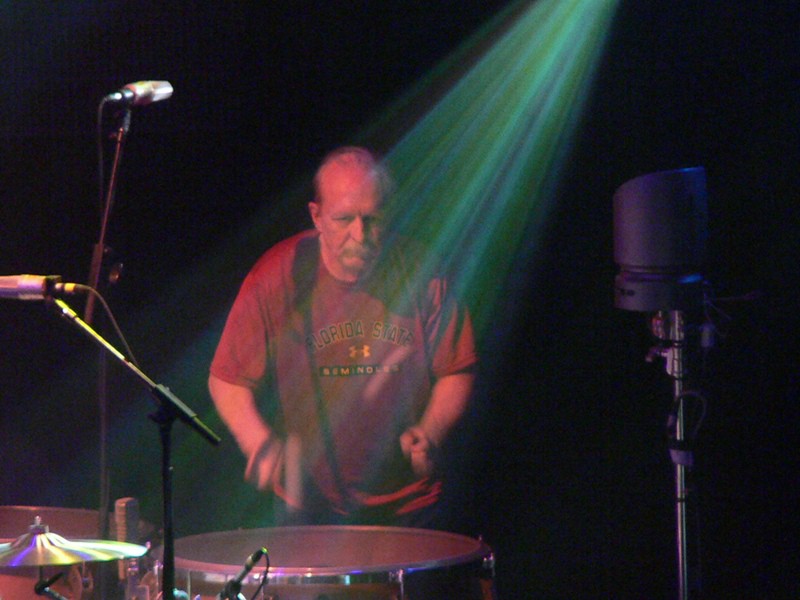 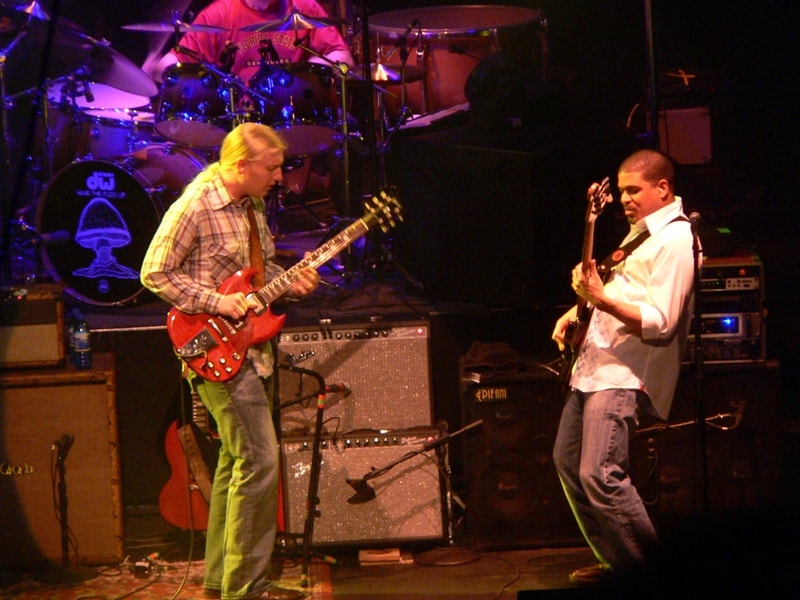 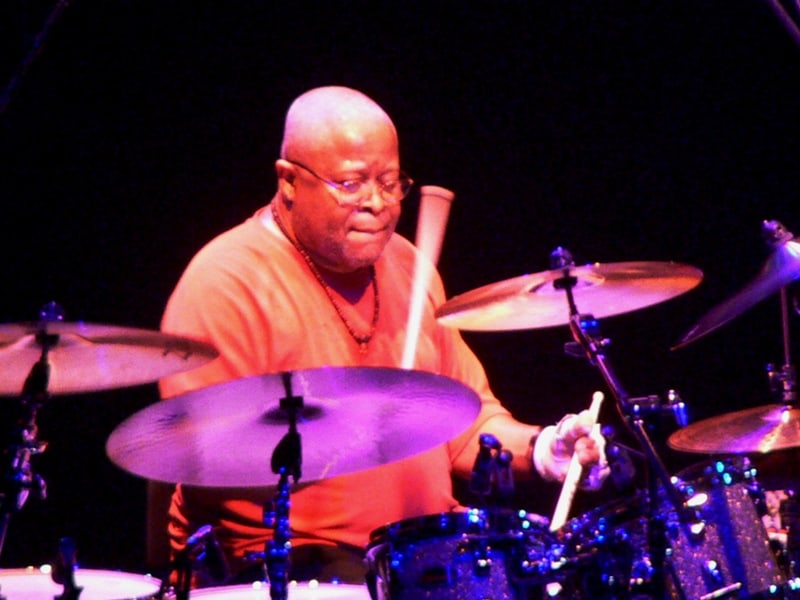 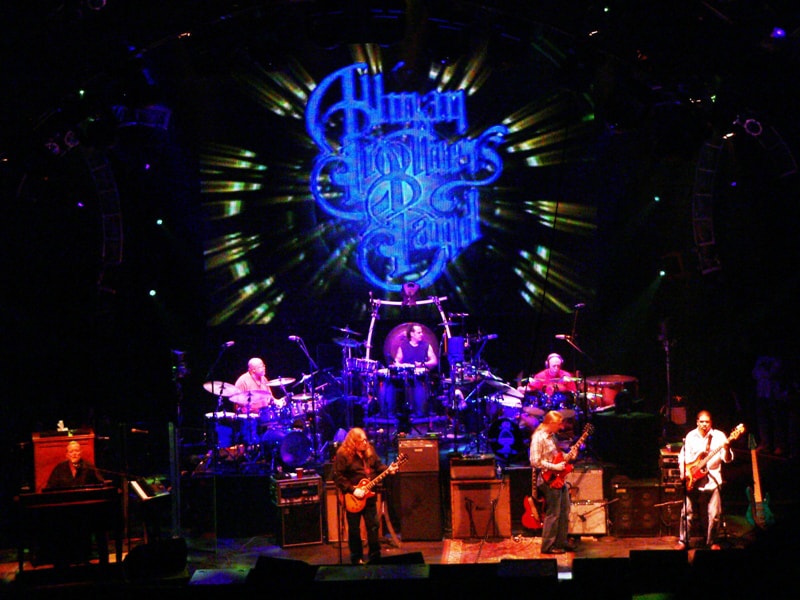 The band launches right into “Statesboro Blues”; Derek takes two nice solos. Then “Don’t Keep Me Wonderin’” keeps on going, refusing to end, Derek pulling the squawking blues, Oteil bouncing back the bottom. Together the two of them hit the note.

“Don’t Keep Me Wonderin’” has pulled us all the way into the show; “Hot ‘Lanta” sounds immediately great. Gregg and the guitars take a round of crisp solos, Warren, Derek and Oteil lock in, push, into a big, deliberate end.

One of my favorite junctures in an Allman Brothers gig is the point, a couple songs in, where Warren gets his first vocal. This song often sets the direction for the rest of the set. Tonight there is a long, slow simmering run of picante foreplay; Warren is a total tease… then finally, the music flips over into “Who’s Been Talkin’.” Warren ladles on the gravy, Derek goes off, then he slips into double time, the band rolls and tumbles forward, Derek rings the bell, rings it till Warren calls everyone home for dinner. Then the final verse, and Derek and Warren get small, sublime over a gentle drums and bass bed.

A tight, cascading version of “Come and Go Blues” is followed by “Desdemona;” Derek plays a fiery, building solo that totally connects with the crowd. On his turn Warren hits on the “My Favorite Things” theme, to the inevitable delight of all, then works on variations over the chords; soon he’s into prolonged 12-alarm territory (this feels like a “Warren night.”) When he pierces his own pyrotechnics with the return note, the crowd goes nuts.

Beacon vet and Duane Allman cohort John Hammond comes on for a three-song stint to close the set. On “So Many Roads” the energy in the room drops, as gauged by the ratio of sitting-to-standing in the orchestra… but midway in they lock in and pull you back up. Then “Shake for Me,” a jaunty little song they’ve played with Hammond twice before; Gregg takes a nice turn, Derek takes several. Warren adds some nice slide on “Cryin’ for My Baby,” a nice bluesy way to end the set.

The second set provides something you don’t often get at an Allman Brothers concert: an estrogen buzz. The divine Bonnie Bramlett joins Gregg in a duet of “Oncoming Traffic,” Gregg on piano, the two of them on great, soulful weathered vocals. You can hear the whiskey and smoke. She stands center stage; the rest of the band is clustered off stage to the right, watching. Then Bonnie’s lovely daughter Bekka and the rest of the band come on for “Comin’ Home,” a song Bonnie wrote with some ‘60s Brit guitarist named Clapton. It is raucous and unbridled, with both women wailing; Bekka especially is over-the-top pumped to be here and whips up a tiny, demure little frenzy.

“Only You Know and I Know” follows, Warren is lovely on the verse, Derek on the outro, and Oteil is the rubber band man, but this is a song, not a jam, and it is a full-on party. The answer to “are we having fun yet?” is an emphatic “Yes!” (Actually, more like, “Yes, lawdy!”) Bekka leaves, Hammond comes on, and a painfully sweet “Come On In My Kitchen,” in retrospect inevitable. Gregg sings, slurs, growls; Hammond plays very slowly very, very well, putting the whole world into a simple lick. Then Hammond sings a verse, then Bonnie; Derek begins to tart it up just a tad, then he busts out, Warren’s aggressive chording egging him on. Hammond vocals, Bonnie vocals, a fast veteran round robin; Warren plays some slide into a nice Gregg run, into the closing, “Goin’ to be rainin’…” Mmm-mm.

Hammond off; Bekka back, Susan Tedeschi joins the Bramlett gals in the Allman-ettes over on the right, Bruce Katz is on keyboards for “The Weight,” back to the Aretha version. Susan sings the blazes out of the first two verses, Bonnie takes the third, Bekka the fourth, the three of them wrap their dark honeyed voices together for the gospel-style chorus. Katz rolls out a sprightly solo, the girls with call-and-response vocals over the top. Derek takes a melodic solo, then Susan glances over, and with a tiny crook of the finger takes the song from him for the final verse. Oteil is over by the girls, and if he were any happier, he’d burst. Bekka instigates a round of “on me” over Derek soloing that pushes the happy needle to 11.

The guests are off for a nicely played “No One Left to Run With,” an extended but earthbound version to ground the set to a close.

Derek and Warren come back alone for “Preachin’ Blues,” Derek playing, Warren singing. Then “Jessica,” Derek playing nice, round lines; his section has happy feet. Warren pokes, probes at that spot, you know what I mean… you don’t know what it is, but you know you’ll know when he hits it. He keeps poking, the band falls away from him, Oteil gets fast fingers… the band stills, Warren sets down his ax, walks off. Oteil and Derek make beautiful watery tonal exposition together, not a bass solo, but a lovely piece of music. Derek does gentle chiming with the drummers as Oteil goes all slappy; finally Oteil busts a move to hand off to the drummers. A brisk drum solo, the players return, Warren picks right up where he left off, rides the melody, hard, and then, yes, thank you, THAT’s the spot! Exactly!