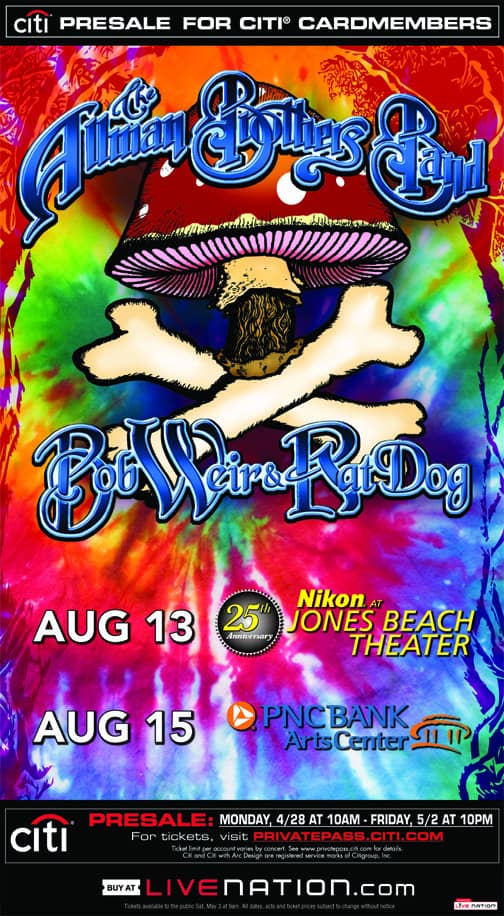 I hadn’t seen the Allman Brothers since Farm AID, which was 11 months ago; turns out this was the longest I’d gone without seeing them since, I think, 1995. So it was great to be home again Wednesday night, facing the full-on Peach Express. It was a nice night at the beach; cool and breezy, a night where you make sure to bring the sweat shirt from the car into the show. It was also pretty much the only night all week it didn’t rain.

Ratdog came on to an almost-empty house, although the deadheads in the parking lot quickly packed up the hibachis and scurried in. Weir led the band through a well-paced set that hit some nice if monochromatic grooves. But to my ears, Ratdog lacks the killer soloist their music would seem to require; this becomes evident when Warren Haynes joins the band about two thirds in for “New Speedway Boogie.” It has a nice “Schoolgirl” vibe; Warren tarts up the bluesy, parabolic licks. Warren and Mark Karan trade licks, but really, it is Warren dripping the butter on this cob. It is as if his every lick energizes Ratdog, you can see him, hear him lifting the band to a higher place. On the outro, the band builds a little space, Warren, Karan and sax player Kenny Brooks cascading rainy lines, into an a capella vocal coda (“one way or another…”) Then the band throws a switch right into “Mississippi Half Step;” I have never heard Warren play this song, but I know immediately he “gets it.” As he bends off short lines it is as if he is squeezing multi-colored mustard into the ‘dog. Warren is Clapton-esque on the “…across the Rio Grande-o” transition, playing high, swooping regal melody lines. Weir sings the vocals, then Warren hits the note, grinds it, pulls the band into the stratosphere. The music shimmers, then gets tiny; Warren plays some gentle bird calls over the top…. and done.

Warren and Weir both leave, the band moves into what I’d call a “disco duck” jam, with weird keyboard noises like an 80s video game. Weir returns and leads the band through a pretty “Knockin’ On Heaven’s Door,” then into “Slipknot” and “Franklin’s Tower,” the inevitable closing of the parentheses after the “Help On the Way” opener.

If you’re scoring at home, here’s the Allman Brothers’ set:

You Don’t Love Me >
Walk on Gilded Splinters
Les Brers in A Minor
The Sky is Crying
Leave My Blues at Home
Good Morning Little Schoolgirl (Karan)
No One Left to Run With
Melissa
The Same Thing > bass >
Drums (Roy Haynes) > Afro Blue (Haynes, CHimenti, Brooks)
Jessica
encore: One Way Out

So it’s nice to see the fellas. “You Don’t Love Me” is short and to the point, a nice opener; Greg’s vocals are crisp and present and he seems happy to be back in the saddle. Warren solos, then Derek; Oteil and Derek turn and face Warren during the closing crouch. There’s a drum shuffle, Warren hits an exclamation point of a closing note, and then bam, the percolating drum shimmy that heralds “Walk on Gilded Splinters.” Warren scats the intro, Derek’s slide grinds out the riff, Warren looks over at Gregg who smiles, lays down some organ, then singes the verse… Warren plays over the drummers, then Derek and Warren trade lines over the drums and Oteil’s bass.

Next the band creates a big, misty overture that will be “Les Brers.” Derek chops down to cue the accents. The band states the theme, then Gregg does a signature B3 vamp, followed by some Derek impressionism. A drum break… an Oteil tone poem… Warren wades out into the purple pool, then gets on his pony and rides. Warren shreds, Derek chords; then the two melt together and move as one back into the lick. The chorded descent that closes the song rings, chimes like a bell.

There is a pregnant pause, filled by the crowd expending some energy; then into a slow blues from the five. “The Sky is Crying.” Derek takes the first solo, long, bent slide lines that sound squeezed out of a big glass tube. Then Derek tortures his strings. Warren sings the verse, then he’s on it like a pig in slop. Gregg provides some slop. Then Warren is back into the final vocal section, with bluesman assurance.

“Leave My Blues at Home” is driven by the engine room, and crescendos in one of those seven-man forward rolls. Mark Karan of Ratdog joins on guitar for “Good Morning Little Schoolgirl. Warren spats out lines, then spacy parts; then Karan goes cool mint; Derek blisters; all the while, Oteil goes round and round… vocals… then Derek owns the quiet time, tossing curvy lines out over the water. Next thing you know he’s leading a furious assault that bursts into the song’s wobbly old riff, and Warren snarls the vocals.

Derek soars over the first break in “No One Left to Run With” then out of the vocals the band locks onto the Bo Diddley jam, which falls back as Derek probes, explores… then Derek, Warren and Oteil fall together onto the melody, and the band turns on a dime into the minor key jam they’ve added to the song’s now-extended mid-section. Warren plays a dark, pleading, dramatic lead, Derek wraps around it, then suddenly it is the Bo Diddley beat again, back for a slam into the close.

“Melissa” is up next, the thousandth time I’ve heard it, the thousandth time I’ve liked it. Warren rings out, Gregg is beaming. Out of the song Butch lays out some soft thunderous timpani as the players resume their positions. Then “The Same Thing,” so my eyes wander over to Oteil.. Warren plays some spot-on slide, then when the song proper is done Oteil starts off with an eruption of 70s funk/soul in a solo spot, once again using this song to demonstrate the short hop from Chicago blues to funk. He puts out rippling waves now, joined by Derek for a melodic section they play to a close… then Oteil throws down a percussive blueprint, guest drummer Roy Haynes on Jaimoe’s kit picks it up, and now the music has become jazz. Haynes, well into his 80s, plays a cool cymbal-heavy drum kit dance… a couple minutes of cool shimmy, thenthe players return to the stage en masse, joined by Ratdoggers Kenny Brooks on sax and Jeff Chimenti on keys, and of course Roy Haynes, for some jazzy free form. Now, you know where this is going as well as I do. Finally Brooks plays the theme, and now it is “Afro-Blue.”Derek spatters shapeless color over a cool Roy Haynes syncopation, then the band alights full onto the theme, then Derek solos… Chimenti plays some nice be-bop piano, the rest of the players turned to face him like sea gulls lined up at the beach. Then Brooks takes a run of be-bop on the sax (to my ears his finest moment of the night), then Warren and Derek converse with phat, hanging notes of tone… Roy Haynes sounds like he has four hands, all cymbals and rhythms… Butch assumes the position now on his kit… Derek and Warren meet center stage, wrap their beams round one another, fire off sideways, then straight into the theme, and bam.

This is the third summer in a row that Haynes has sat in at Jones Beach for “Afro-Blue.” Believe me when I tell you, that isn’t a complaint.

“Jessica” feels like the dropping of the inevitable other foot. Warren lays on the happy juice on the strumming out of the opening theme section; Derek flits over the top, soaring like a bird of tone. Then Derek and Warren are one chunky rhythm. Derek busts loose, nearly bursting out of the song, the n he pulls it in, builds with Warren to the mid-song return, Gregg’s organ swelling underneath. Then the players fall away, the drums seem to swell in the newly available space, then Warren plays piercing vibrato notes, breaks a string, and Derek seamlessly covers as he changes axes… then back into the song’s close.

“One Way Out,” the encore, has a definite feel of, looming curfew.

A good show, a little short owing to the Ratdog opener, and if the band wasn’t in playoff form yet, on their second show together in 11 months, no one went home unhappy. In fact I brought our friends’ kid, Max, 14 years old and there to see Ratdog. The next day, his father wrote to tell me that Max now things the Allman Brothers are the best band around. A development which surprised no one.