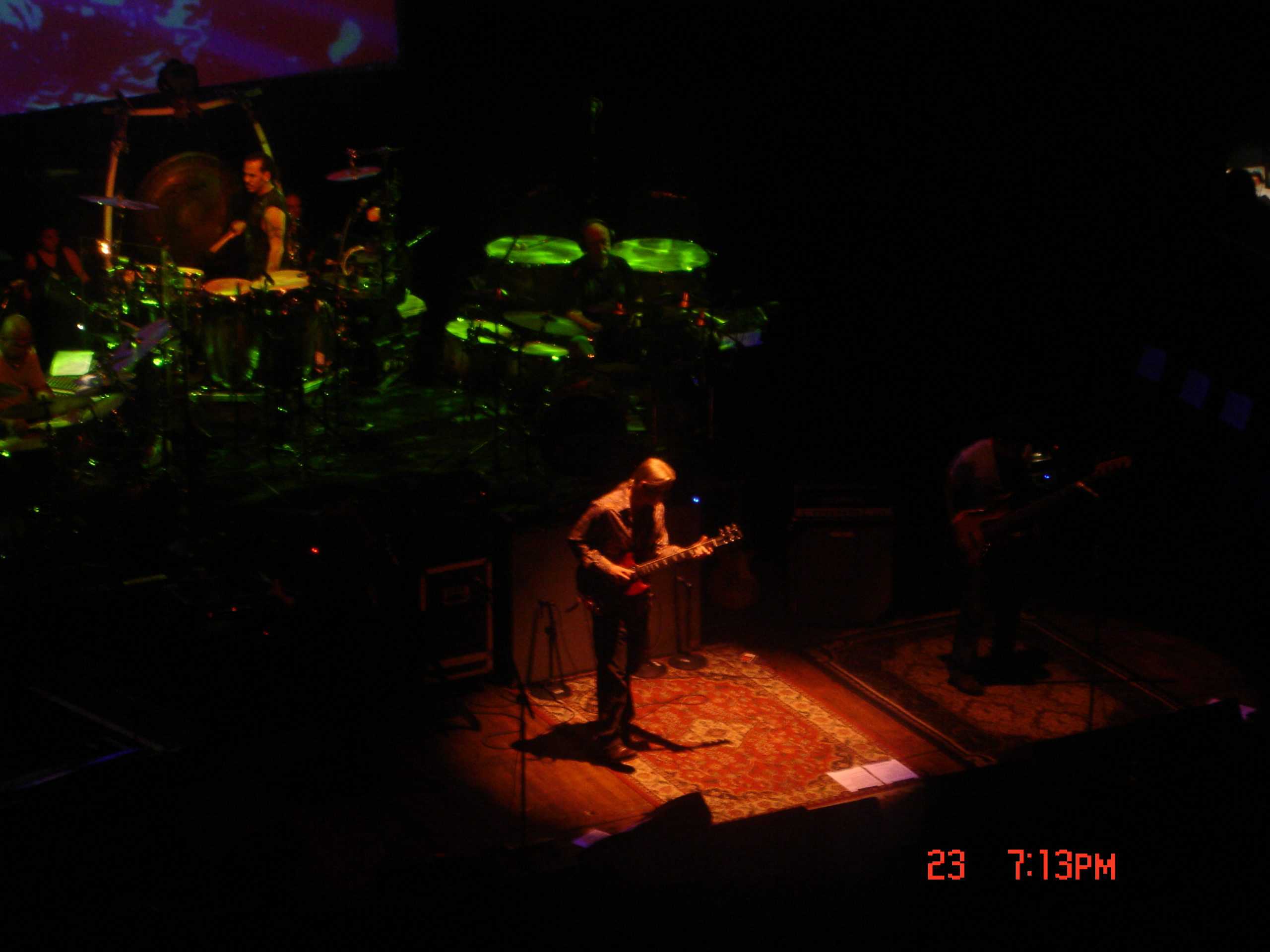 Over the overture mists, Derek chops his ax down hard to herald the introductory strains of “Les Brers in A Minor,” quite sufficiently grand; Derek brings his guitar down similarly several times to emphasize beats, a surprisingly animated set of gestures for the Zen slide master. Oteil has his back to the house, facing off against the drummers and radiating waves of bottom, pushing the band into the theme. Oteil is playing big, Gregg’s B3 solo is fresh and brisk. Derek goes all flash, then pulls up, plays a big hanging note that is like a page break, then he plays a creaky, building solo, goes to double time, and finishes up with his open right hand bashing out a chorded phrase. A drum interlude, Marc high on top accenting… Then Warren solos over a solid Oteil base, a furious electric blur that connects with the house, pulling a cheer from our collective throats. “Les Brers” is a BIG beginning, like running back the opening kickoff to the 5-yard line. It hits the spot with the Friday night crowd.

“Can’t Lose What You Never Had” is also big and in the pocket. Gregg is hard allover the vocals, there is some added jaunt to the riff, it seems less stripped down than in recent years. On Warren’s solo he pierces the sky with true pure blue lines from the heart of the song’s melody (which at this point in the jam is just barely implied)… spot on.

On a wistful “Aint Wastin’ Time No More” Derek spreads the slide on extra thick on his solo, and Warren plays a nice slide outro. Then the night takes a solid foothold somewhere along the southern half of the Mississippi as Warren launches into “The Sky is Crying,” blues to the max. Warren belts out some truly sorrowful singing, then plays some slide with a dash of vibrato; then he peels off long lines of timeless blues. “Warren is having a great night,” someone from behind me says, someone who would know. More sorrowful vocals, then Derek solos, pushing, poking, seemingly trying to get away from the blues form. Finally, grudgingly, he gives in, makes a bee line for the sweet spot, and the house erupts as he rings the bell… then he figures, what the hell, and he rings the whole damn church. Out of the turnaround Derek brings it back down for a humble close, handing off to Warren for the final vocal section. Outstanding, if you like the blues. And if you’ve read this far, presumably you like them a lot.

Warren tosses off howitzers on his solo in “Who to Believe;” after the middle vocals, Derek peels off spry, wily elongated notes melting into nice creamy slide work. Warren steps up in the middle of “Standback” and adds the hot sauce; Derek plays a hard-driving, extended outro.

Jay Collins and Susan Tedeschi come on for the set closer, and when it turns out to be “The Weight” the guys around me whoop and hoot their approval. Susan, of course, belts the crap out of the song, Collins lays down mellifluous lines (can you believe I wrote “mellifluous” on my note pad in the dark?) Warren plays some stinging lead way up on the fret board, straight from a grizzly, primal space. Then he sings the “Crazy Chester” verse, Susan the final verse, then a long vamp, Derek flying hard over the gritty riff, then back into the vocal refrain (“Take a load off Annie…”) Bluesy ending to a bluesy set. Did I mention Susan sings the hell out of this sucker?

Some loose drum play turns into a syncopated beat, and before many in the crowd realize the second set has begun, the boys in the engine room are beating out what is surely going to be “You Don’t Love Me.” Finally Oteil wraps his fingers around the riff and we are jet-propelled into the song. Warren and Derek play the blues, then they pull up and a 2-guitar musical conversation ensues about where to go next. Warren plays some bent-note blues way at the top of the neck; Derek answers with some deep, big-mouthed notes. Finally a go at the transitional section that takes us to the Serenade. Derek dances over the top, then another section, Derek is white hot, he and Warren intertwine, then Derek drives the band down… finally Oteil plays the “Soul Serenade” chords; Derek and Warren solo over it in unison, then Derek takes off, flies like a bird. Cascades of light bubble forth as he rains down shimmering lines; “Soul Serenade is just so totally in Derek’s strike zone.

The band forges on into “Don’t Keep Me Wondering” before the clapping has subsided, Derek plays the bent glassy blues. Then the house erupts with a collective “Say what!?” as the band rolls into the Hendrix tune “Manic Depression.” Oteil, naturally, sings the vocals; Derek plays a controlled shred behind him. For his solo, Derek hits at 60 miles per hour; then slows up into space; he tosses out multi-colored tone poems. It has seemed tonight that in a largely blues-based set, Derek has strained to find some space; sometimes you have something to say and it aint the blues. “Manic Depression” gives him the chance, and he makes crazy beautiful art. Then the band tumbles into the song’s wobbly cadence for vocals, Warren lays on the wah-wah on his solo, taking the tune into a sort of ‘Rocking Horse” territory. Oteil throws the big riff back at the band, and they lean hard on a kick-ass close. Success.

“Trouble No More” follows up, on point, a pay-off song, and gives way to a brief drum section that might be Jabuma…

… but instead it becomes “Walk On Gilded Splinters,” a taught driving version that does give way to the drum section. Oteil is again in the front on the big bass drum, then he moves to Butch’s kit as Butch slides over to timpani. The percussion army falls onto a simple, insistent rhythm that for some reason conjures for me the image, “Cocoanuts.” Oteil switches to bass as the engine drives on, it is less a bass solo than a continuation of the drum section with one player on a different instrument; then he lands on the “Gilded Splinters” riff, the guitars join in with tie-dyed solos, then the final vocal section. Fierce.

“Black Hearted Woman” is up next. Another drum interlude, the second set has been heavily percussive… then Warren scats over the lick, then the theme on the outro. They fall into that triplet coda to the song, around and around, faster, faster, then Warren hits a two-chord phrase, and ever so subtly the triplet coda turns into a jam on the Dead’s “The Other One” (often evoked in this section.) Derek plays long, languid notes over the top, then he plays hotter, whiter, faster until his strumming hand is a blur across the strings. Gregg is insistent on the riff as Derek blows the top of your head off. Then a double-time chord phrase by Warren stop-times the band over drums, then they fall distinctly back into the triplet riff (which just happens to contain 98% of the DNA of “The Other One”) for a definitive “Black Hearted Woman” close. A thunderous finish to the set.

Derek and Warren come out alone for a stripped down electric “Preachin’ Blues,” Derek on slide, Warren on vocals. Then the full band with Jay Collins, and of course it’s “Southbound.” It is a nice, tight, “in-the-lines” version, giving way to the usual round robin of rollicking lead lines, guitar, guitar, sax. Tonight “Southbound” sounds especially fresh, spot on.

A solid, bluesy show with some great group percussion in the second set. What will Saturday night bring?

Really really would love a copy of this show – please e-mail me at gpsydancer830@aol.com.

Thanks – Love and Light!

saw this show last night and was blown away!!! looking for a recording…

great show boys are in top form .
1st Set
Les Brers In A Minor
Can’t Lose What You Never Had
Ain’t Wastin’ Time No More
Sky Is Crying
Who To Believe
Standback
The Weight *