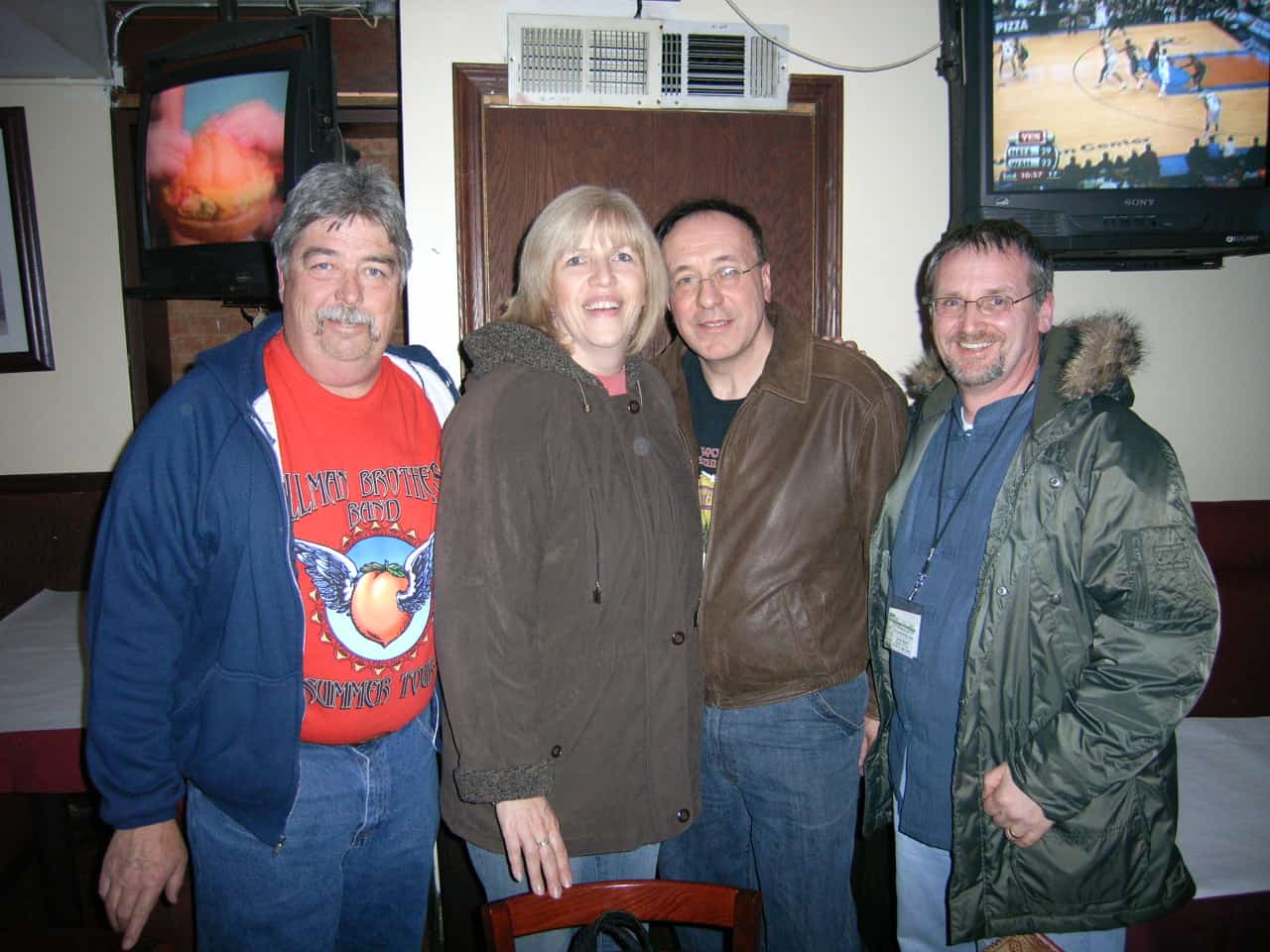 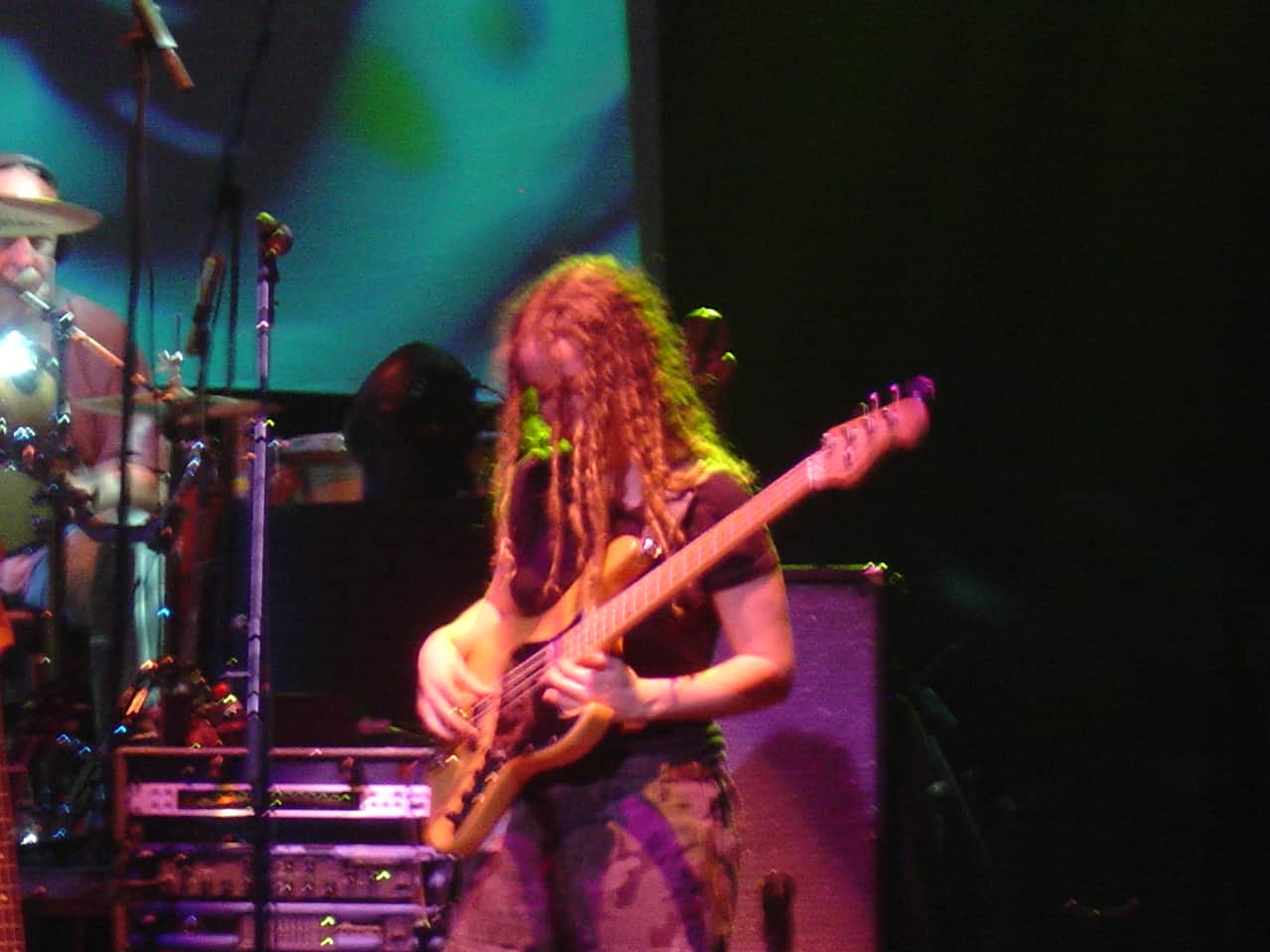 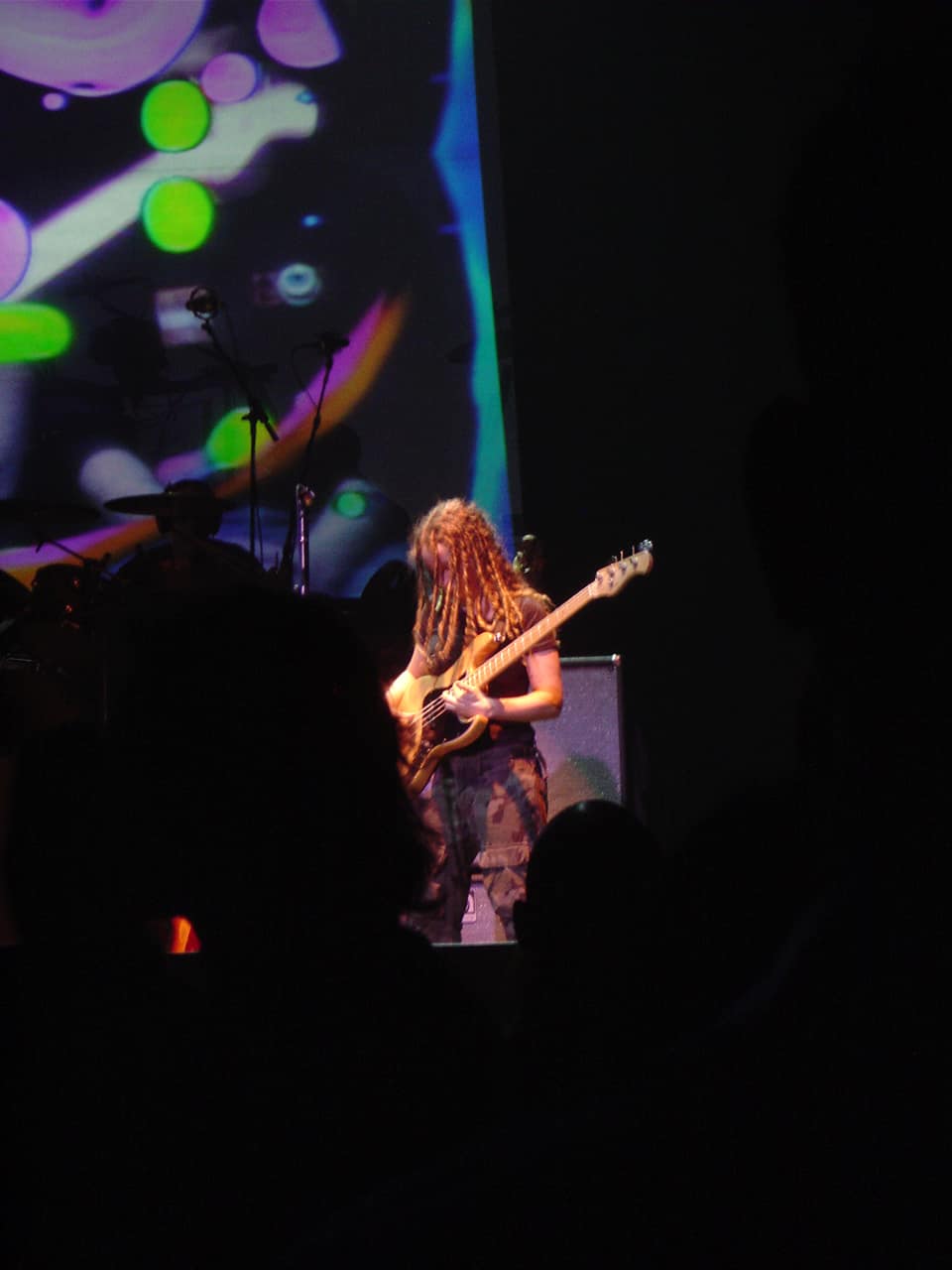 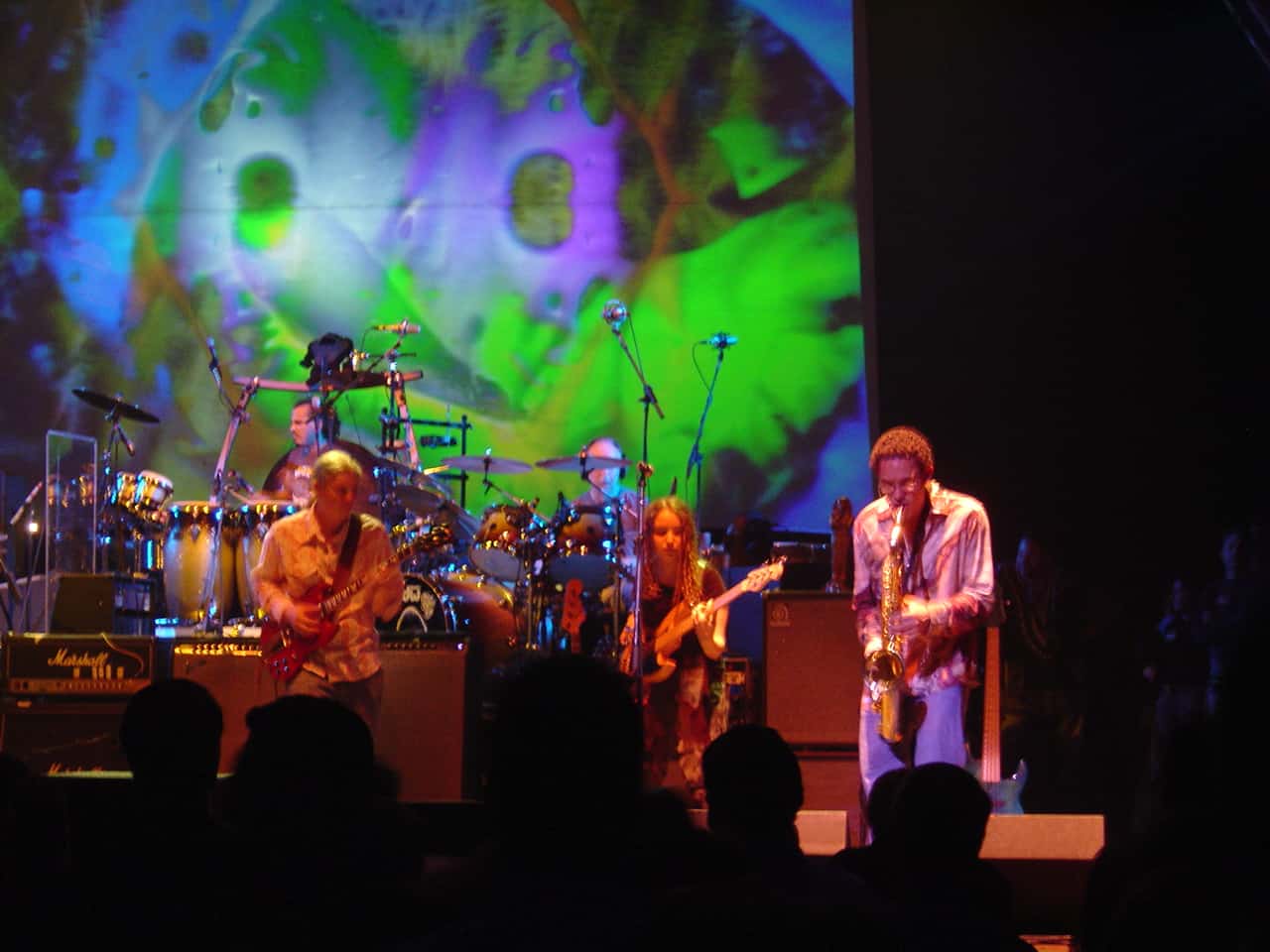 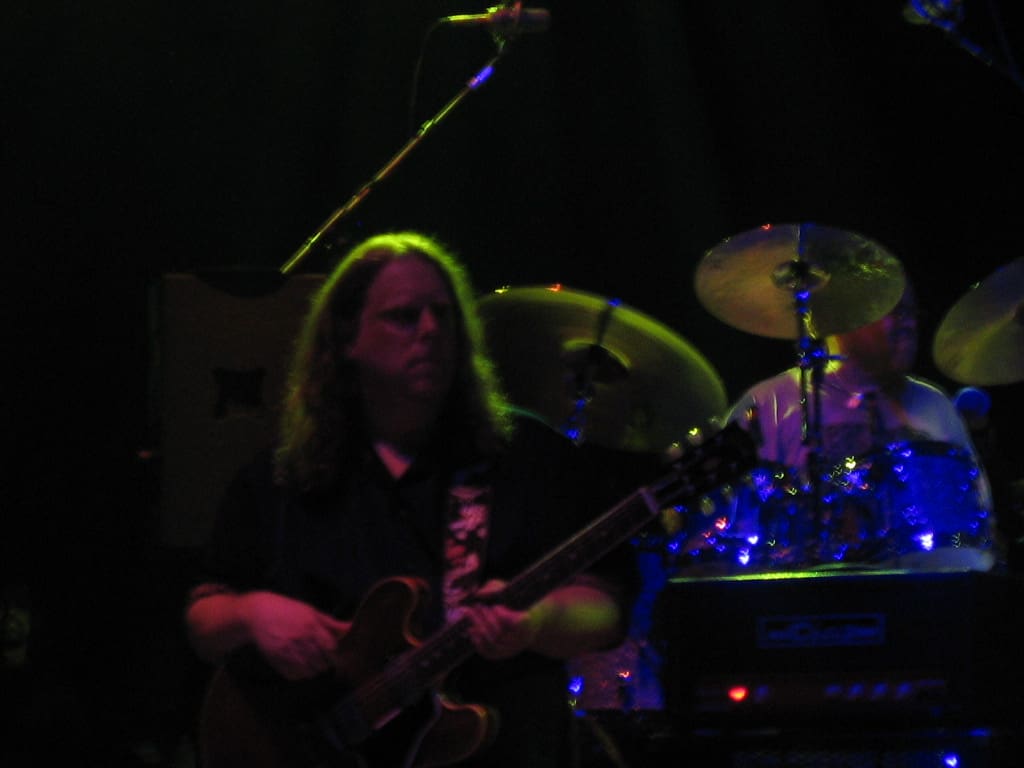 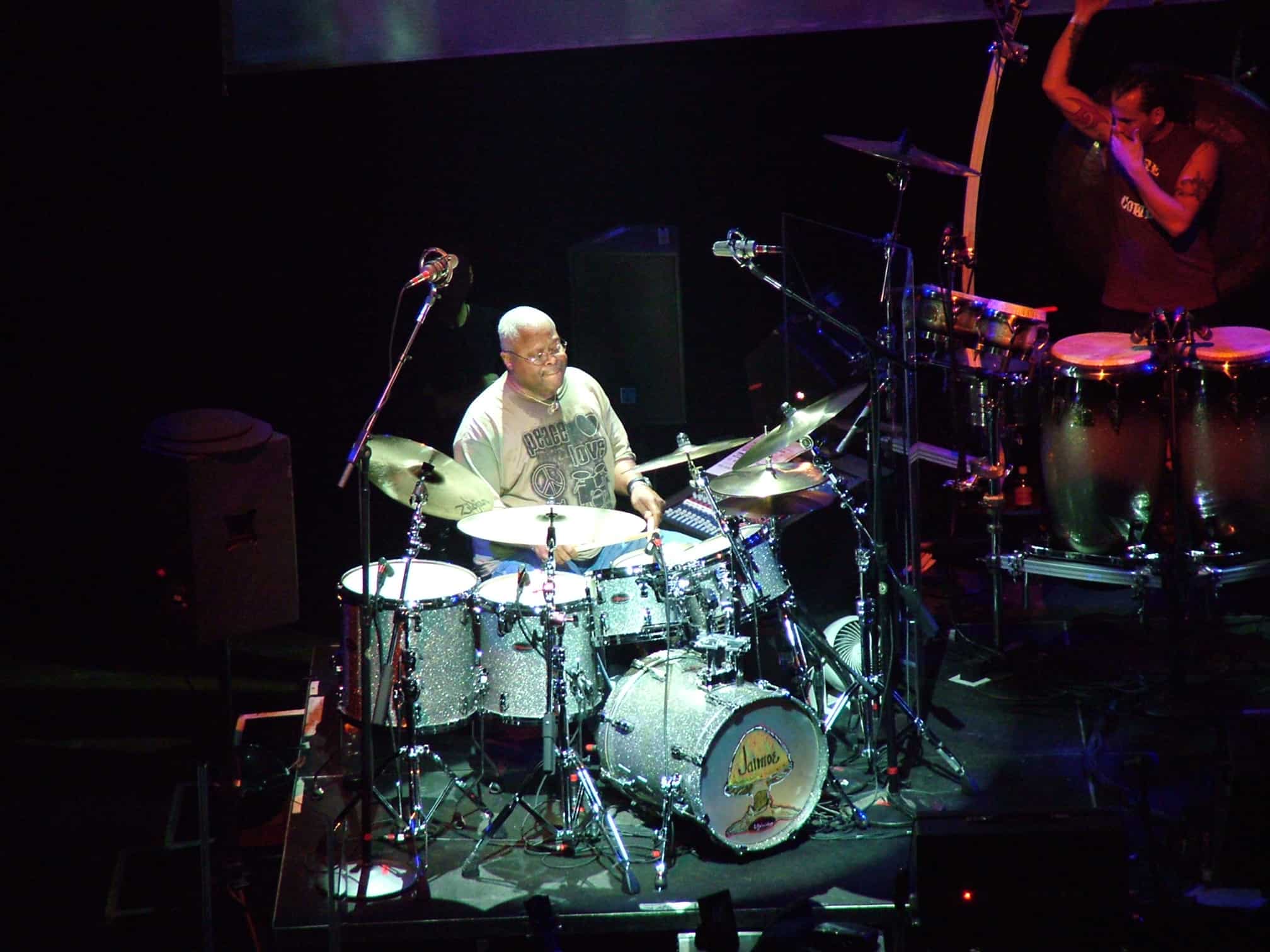 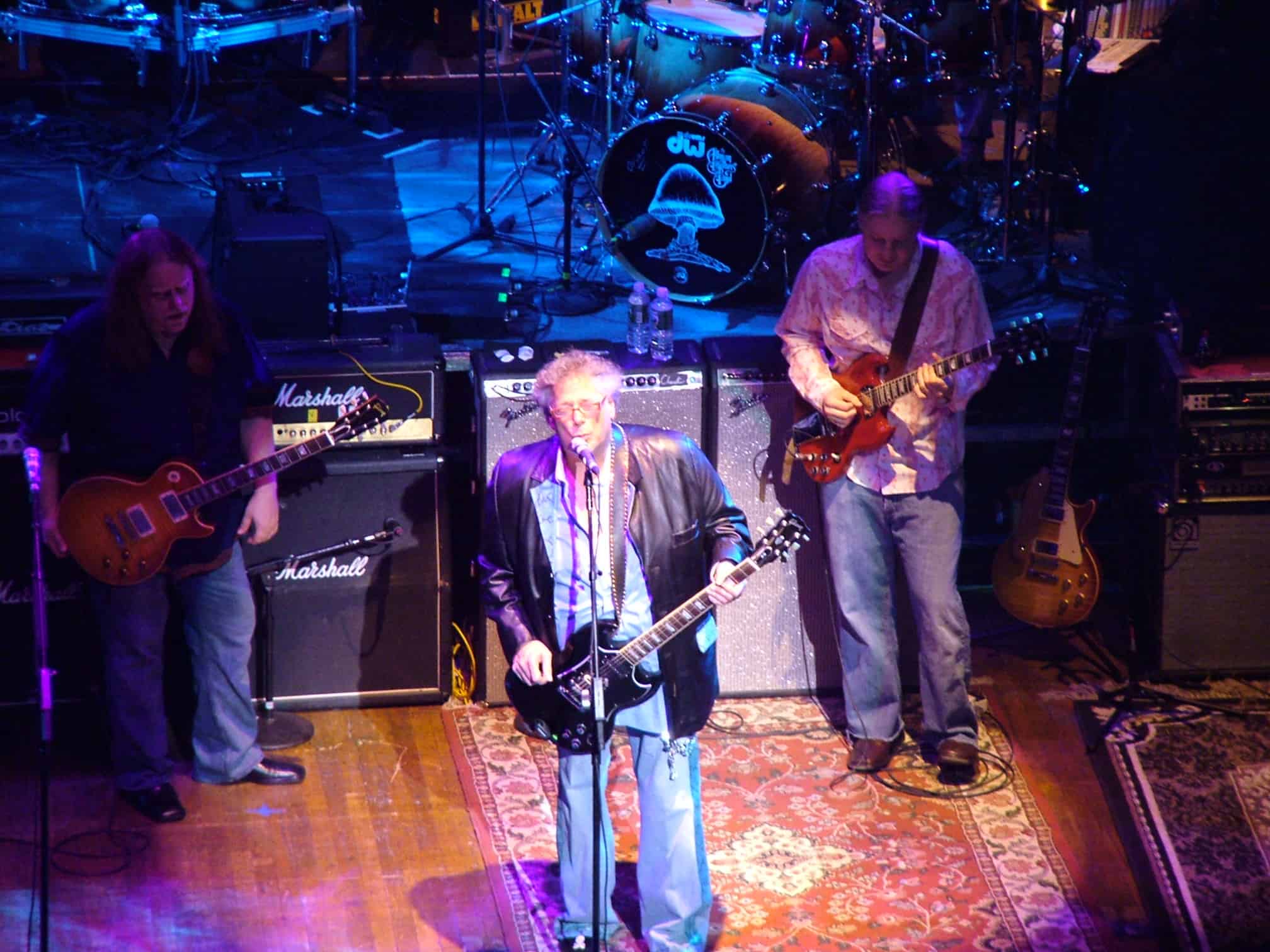 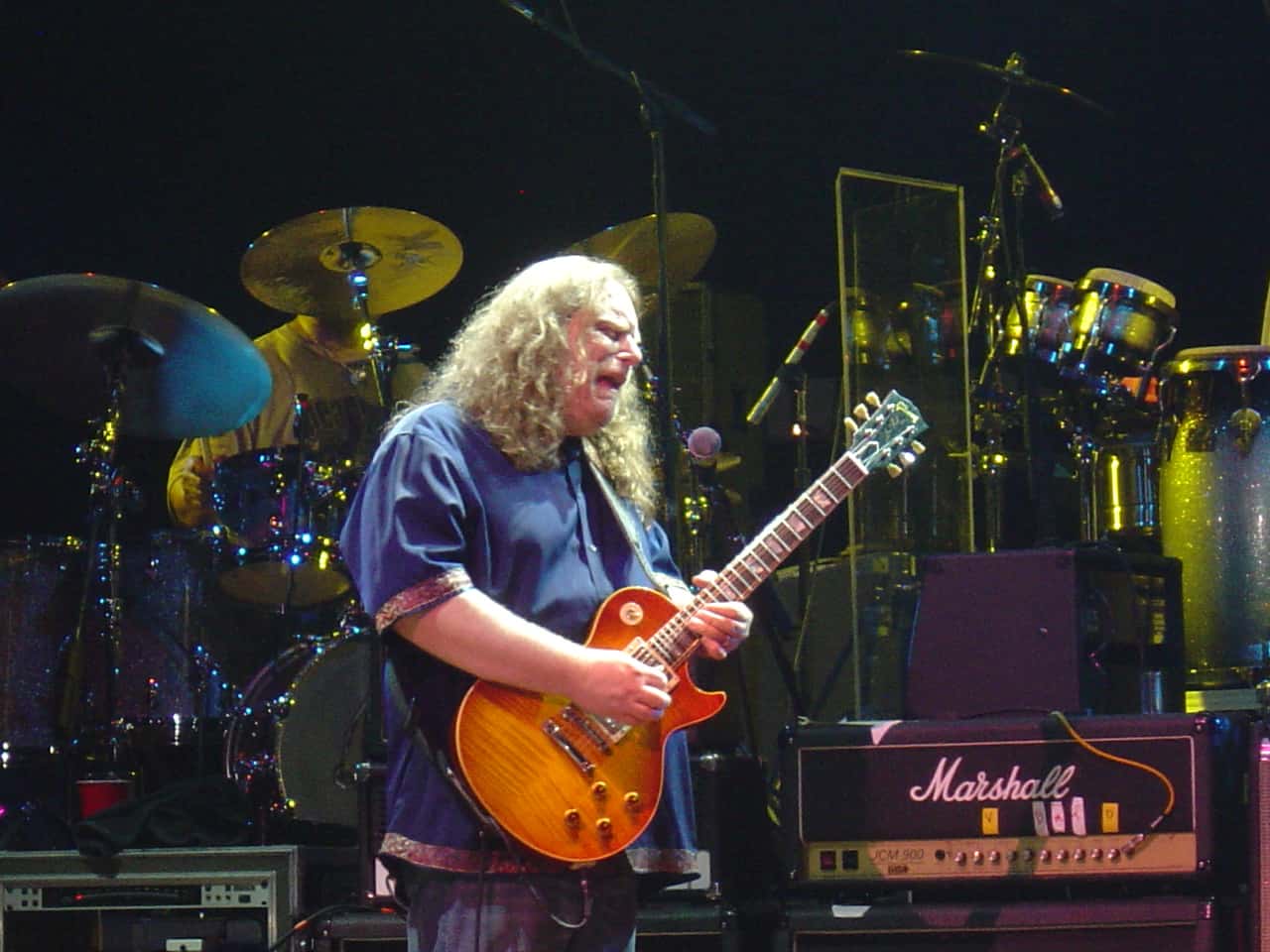 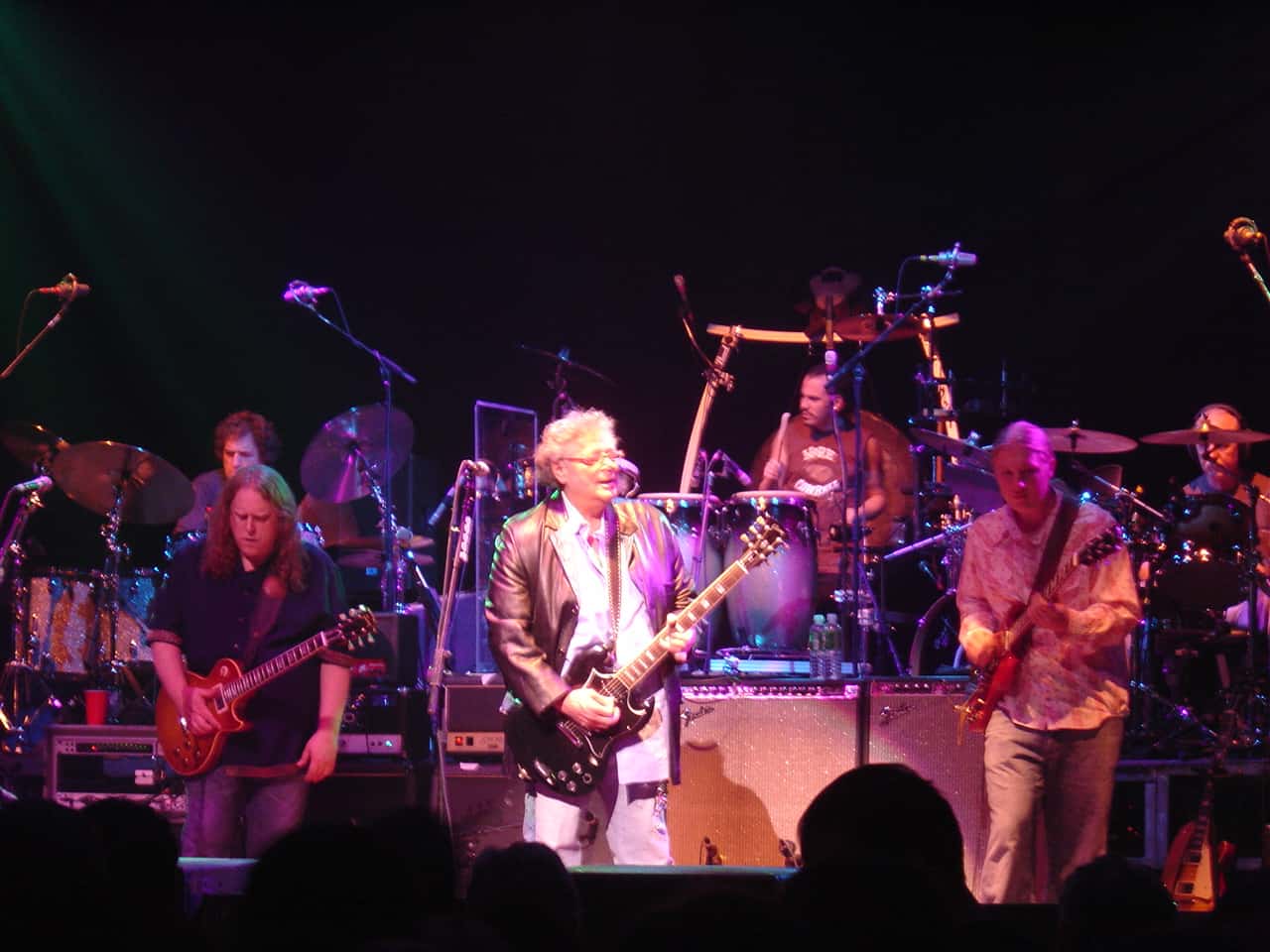 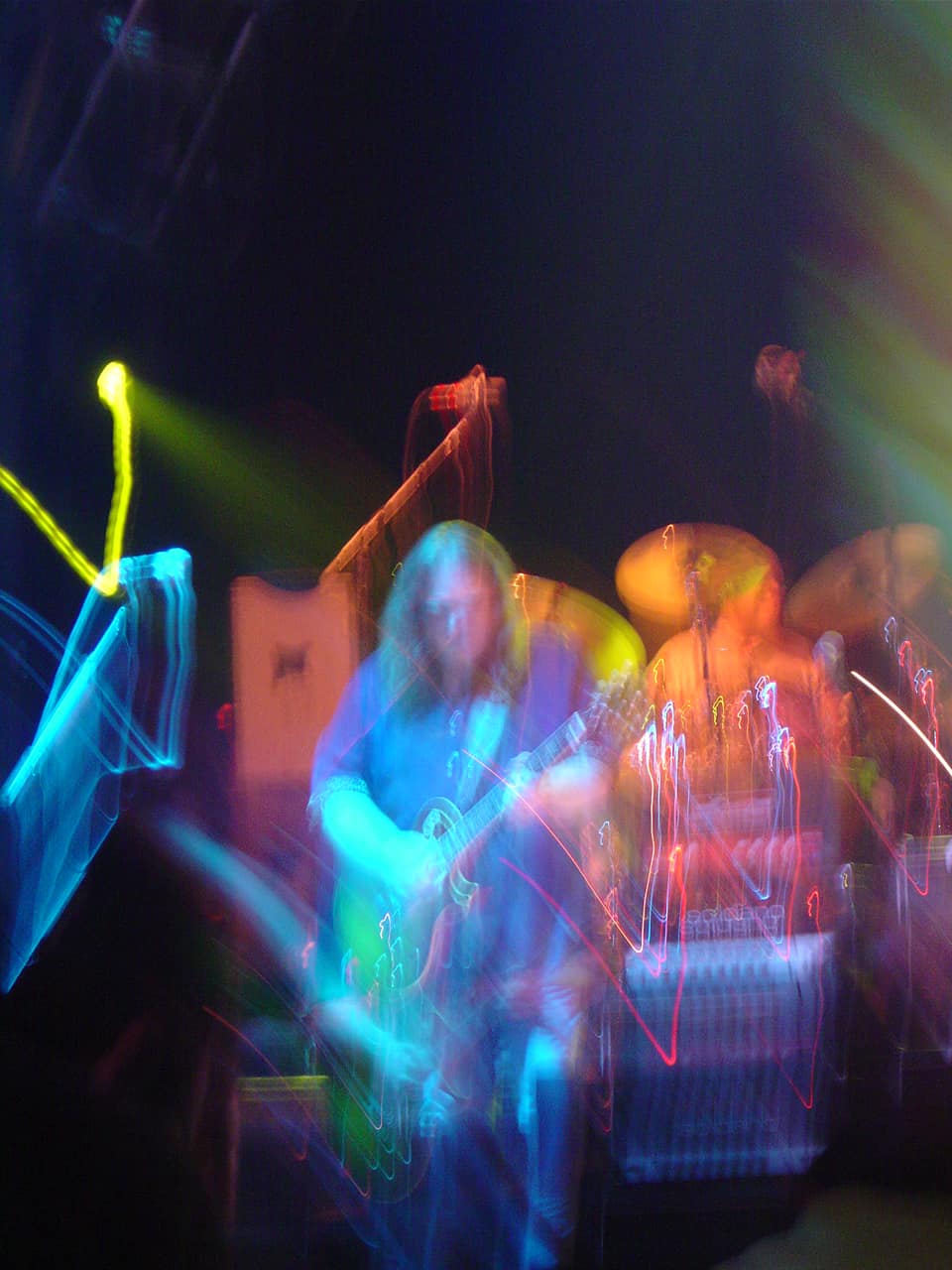 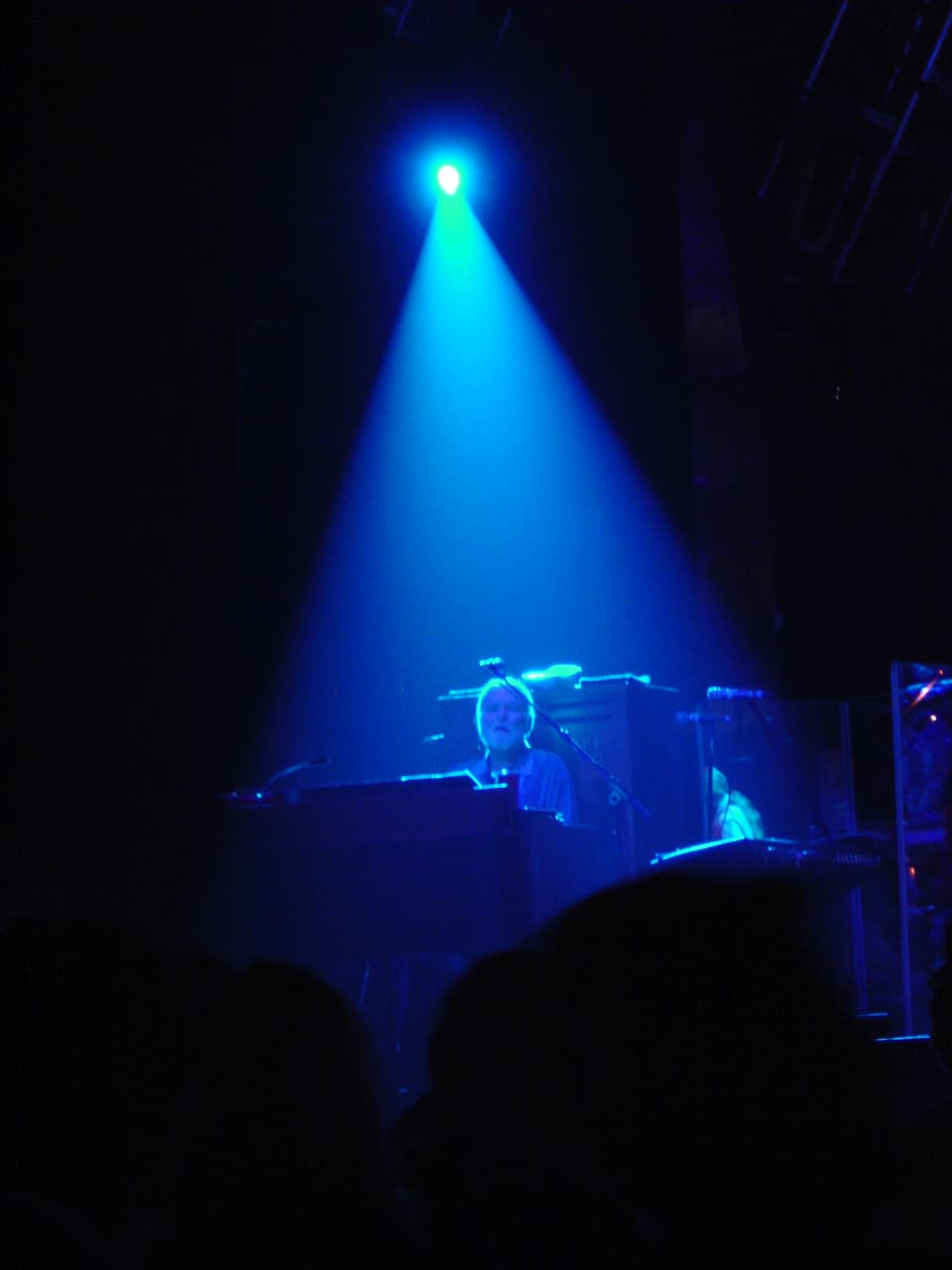 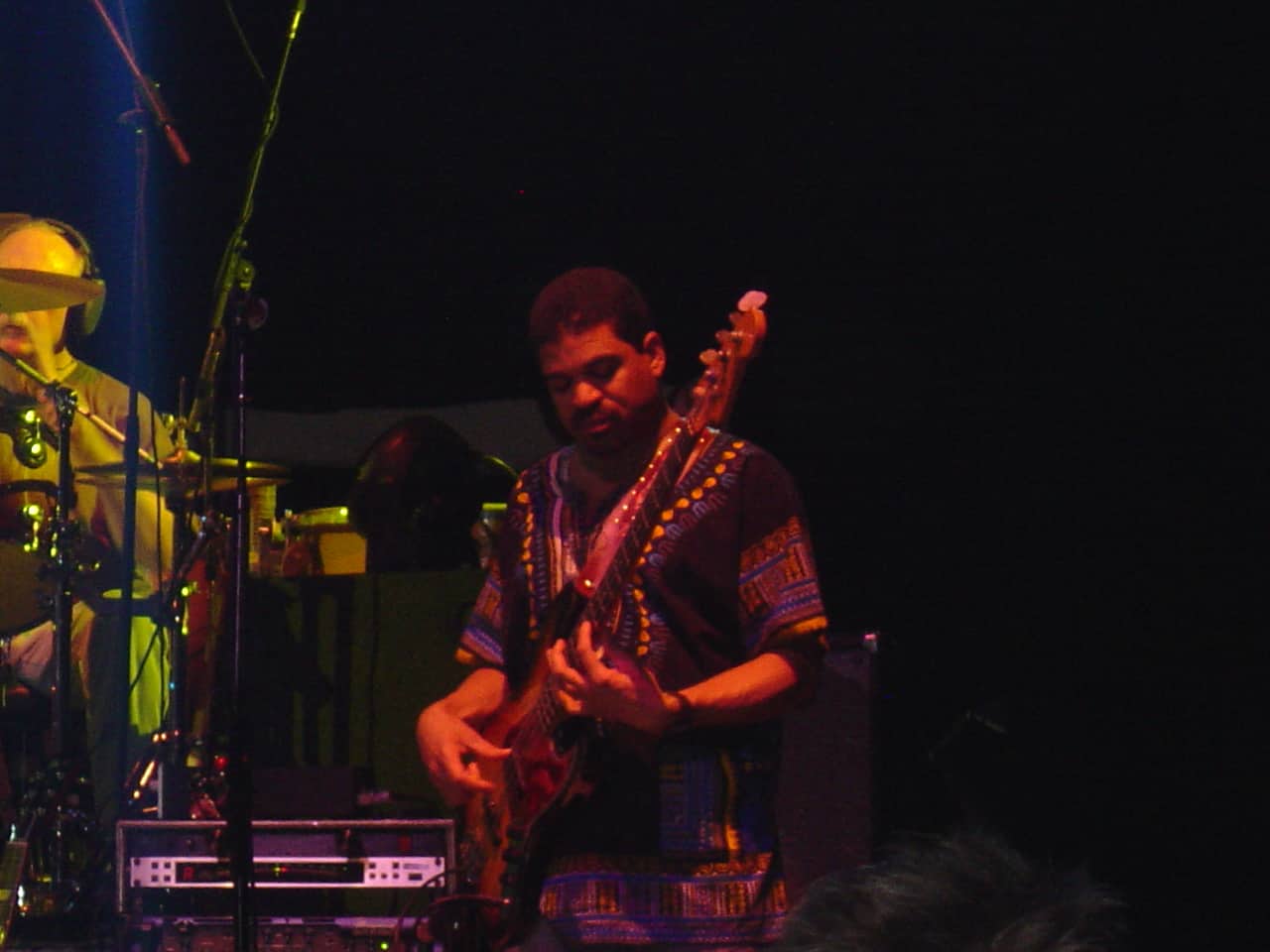 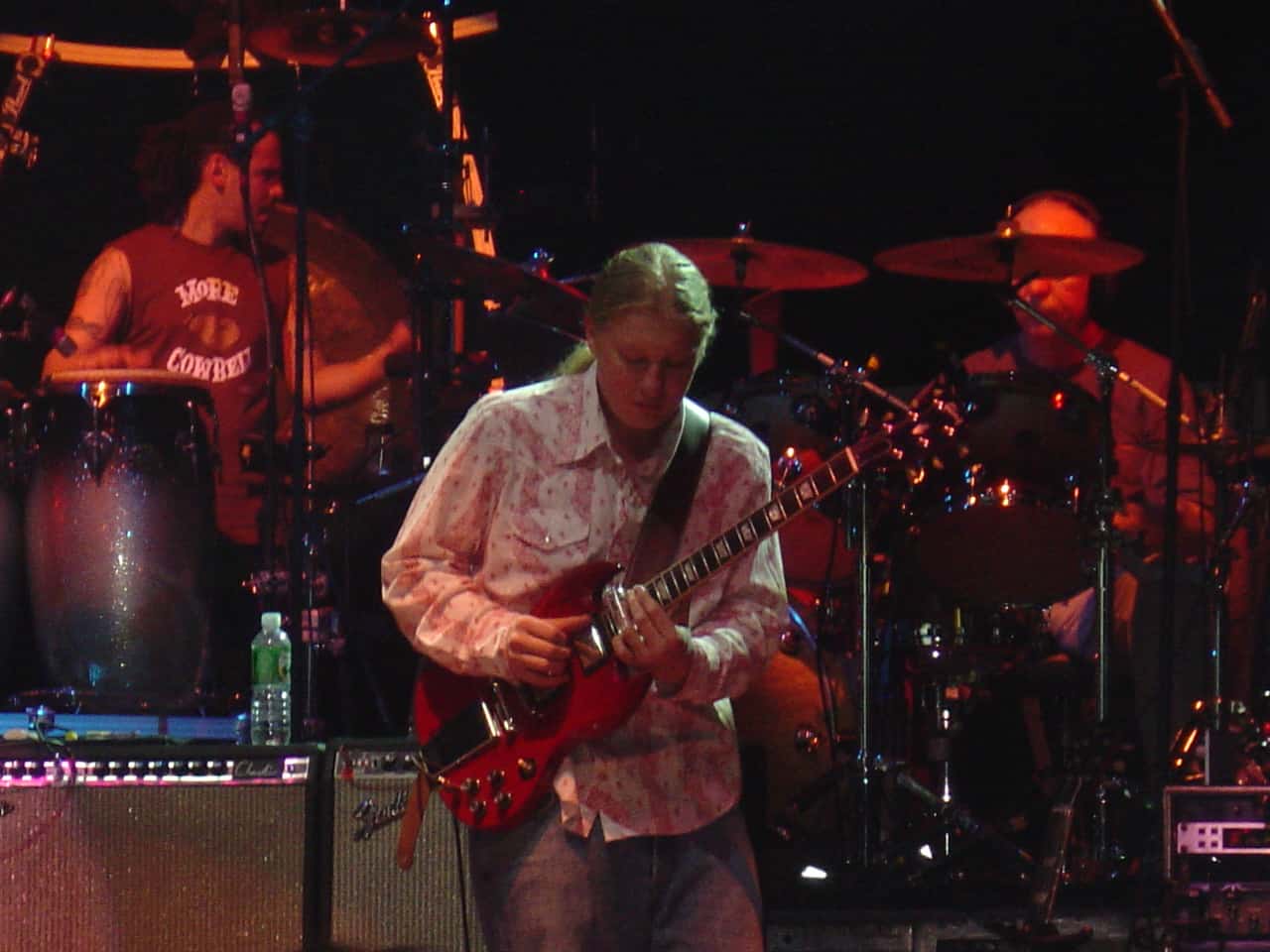 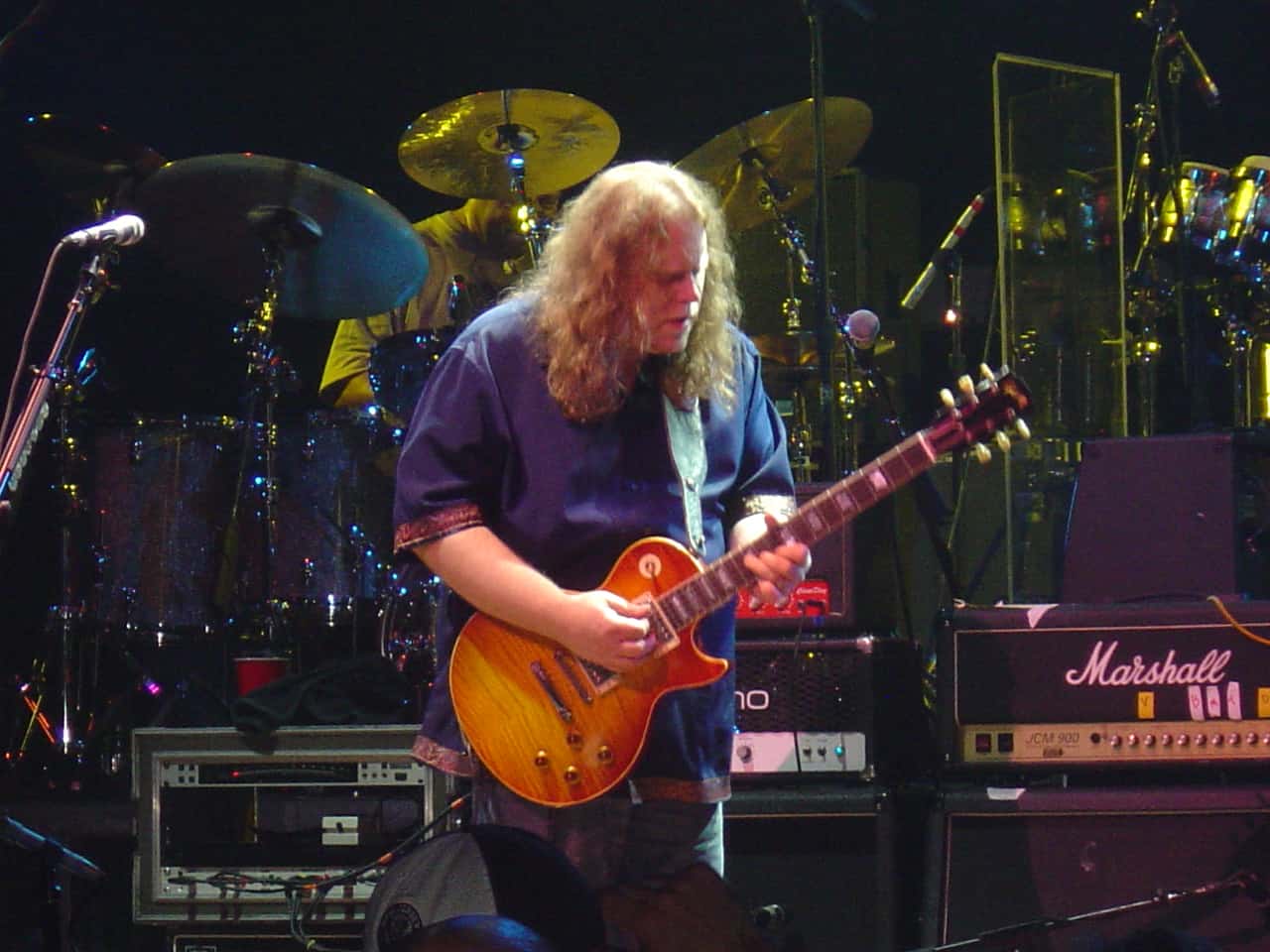 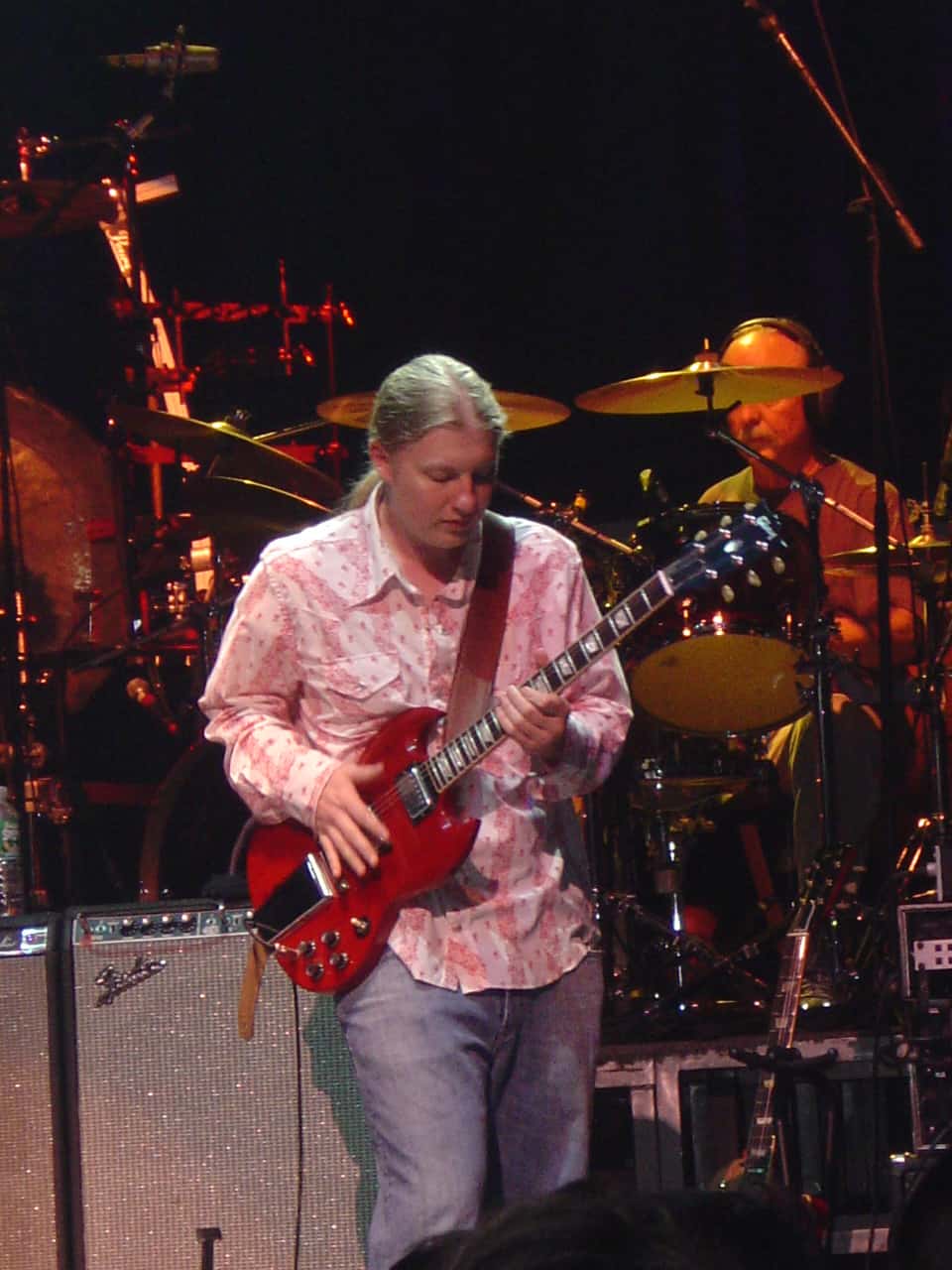 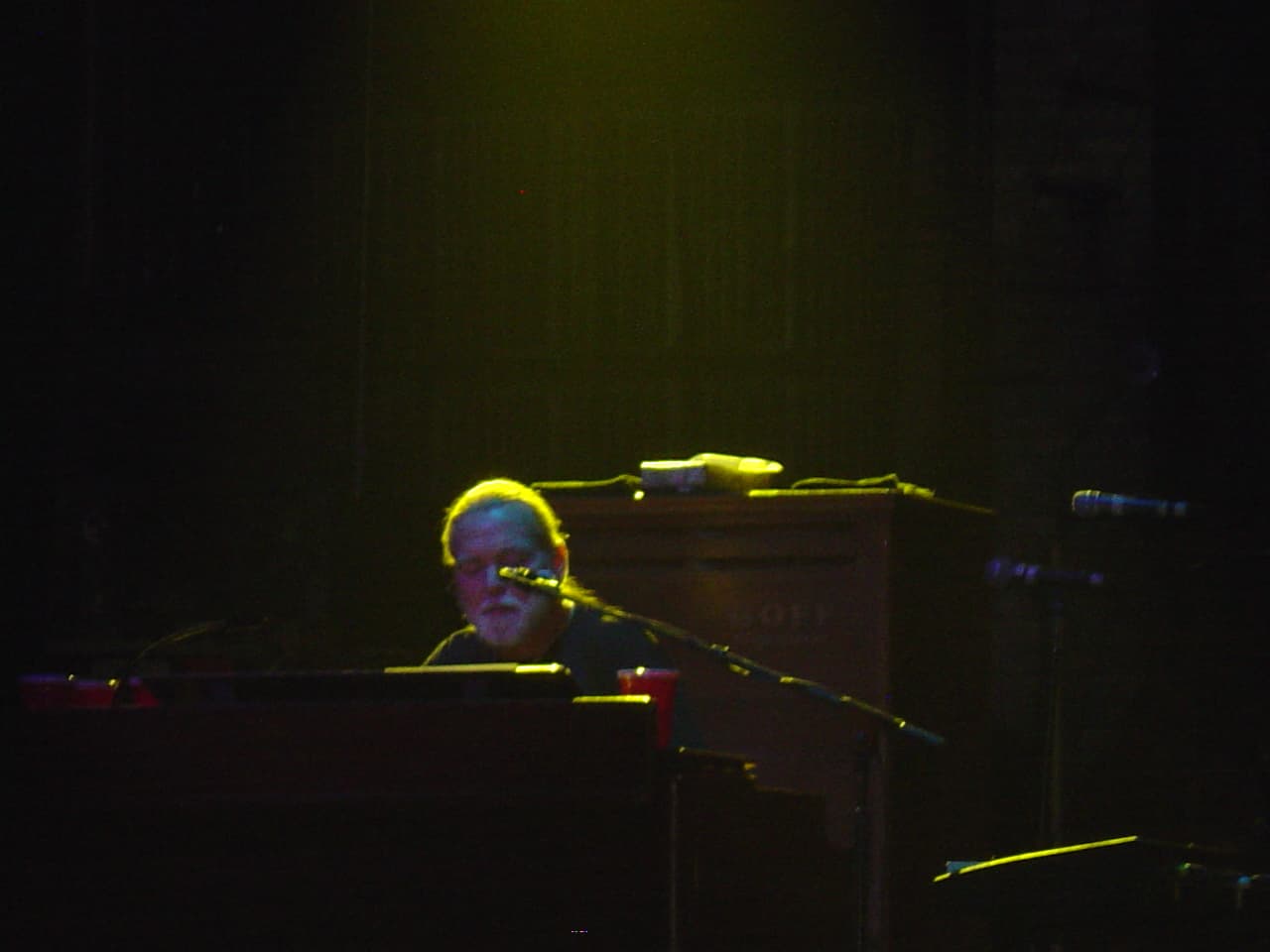 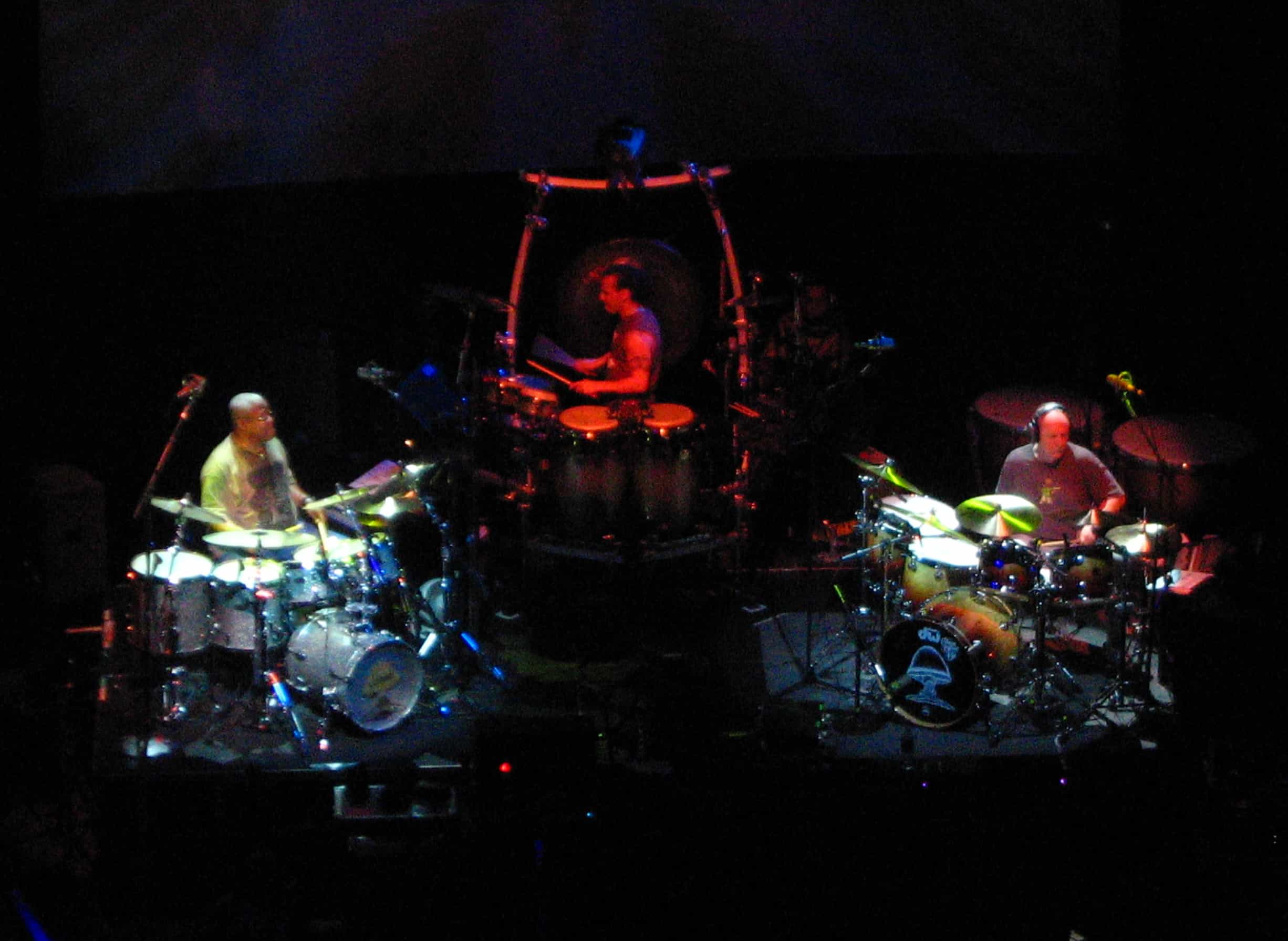 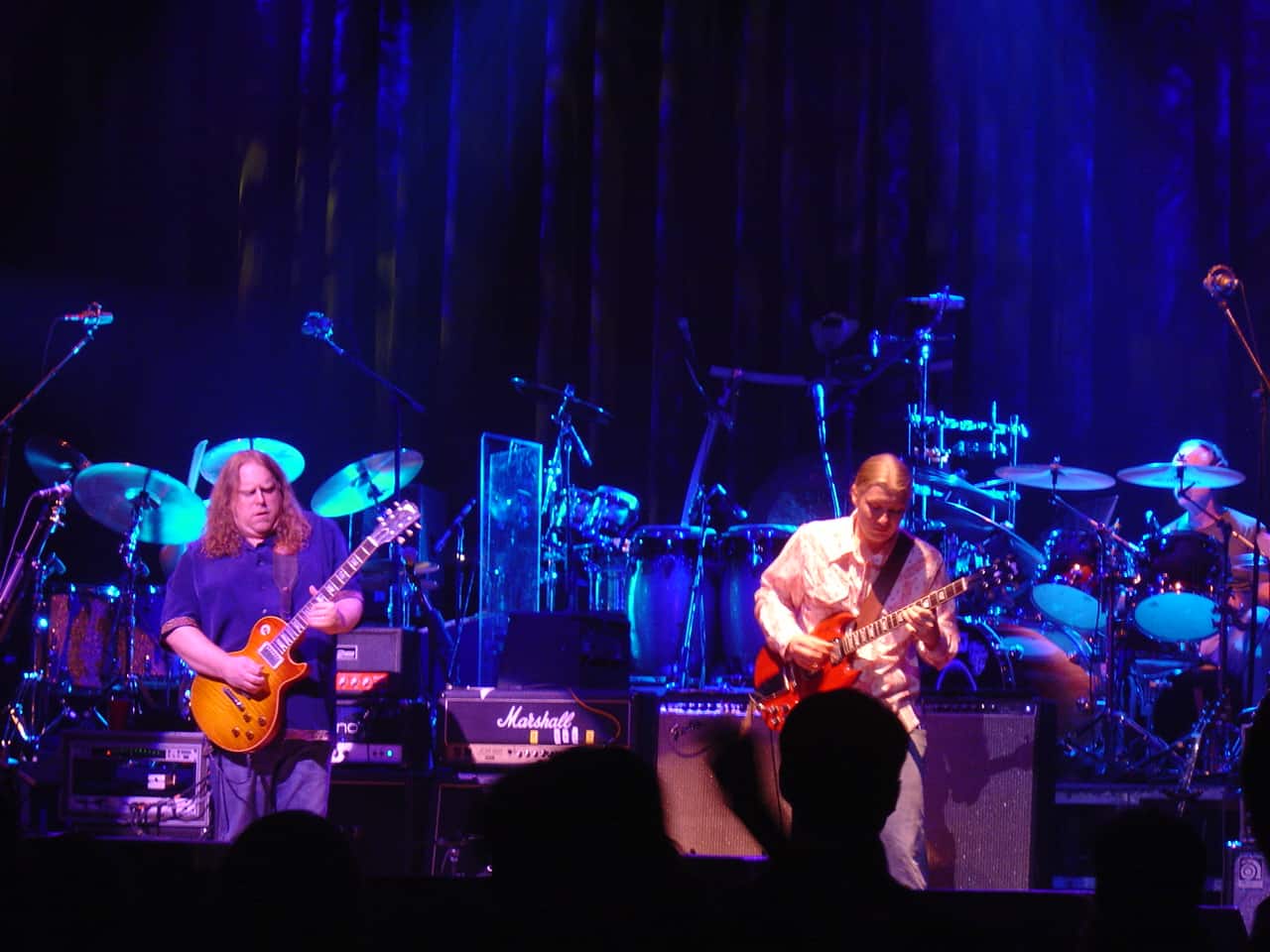 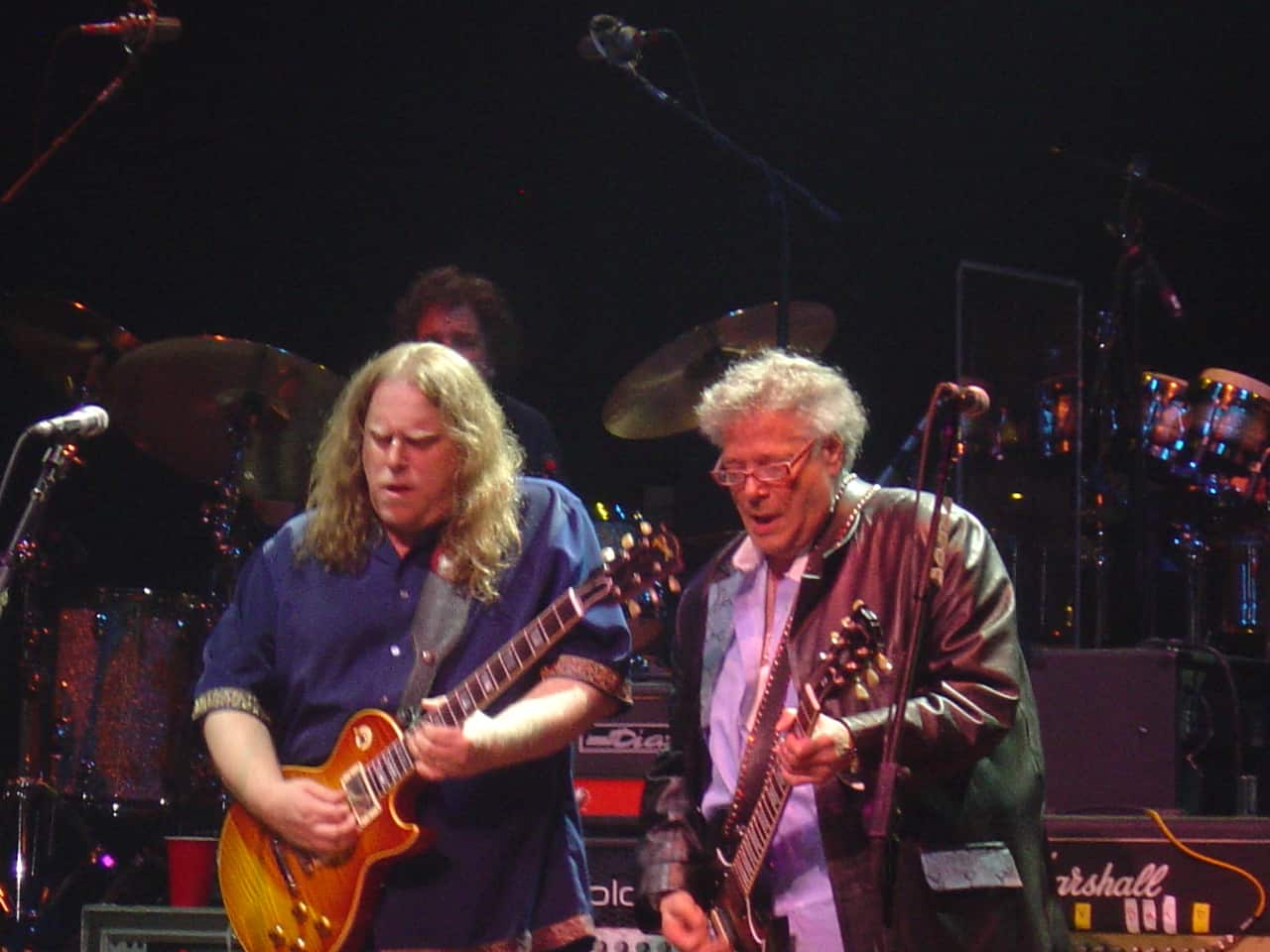 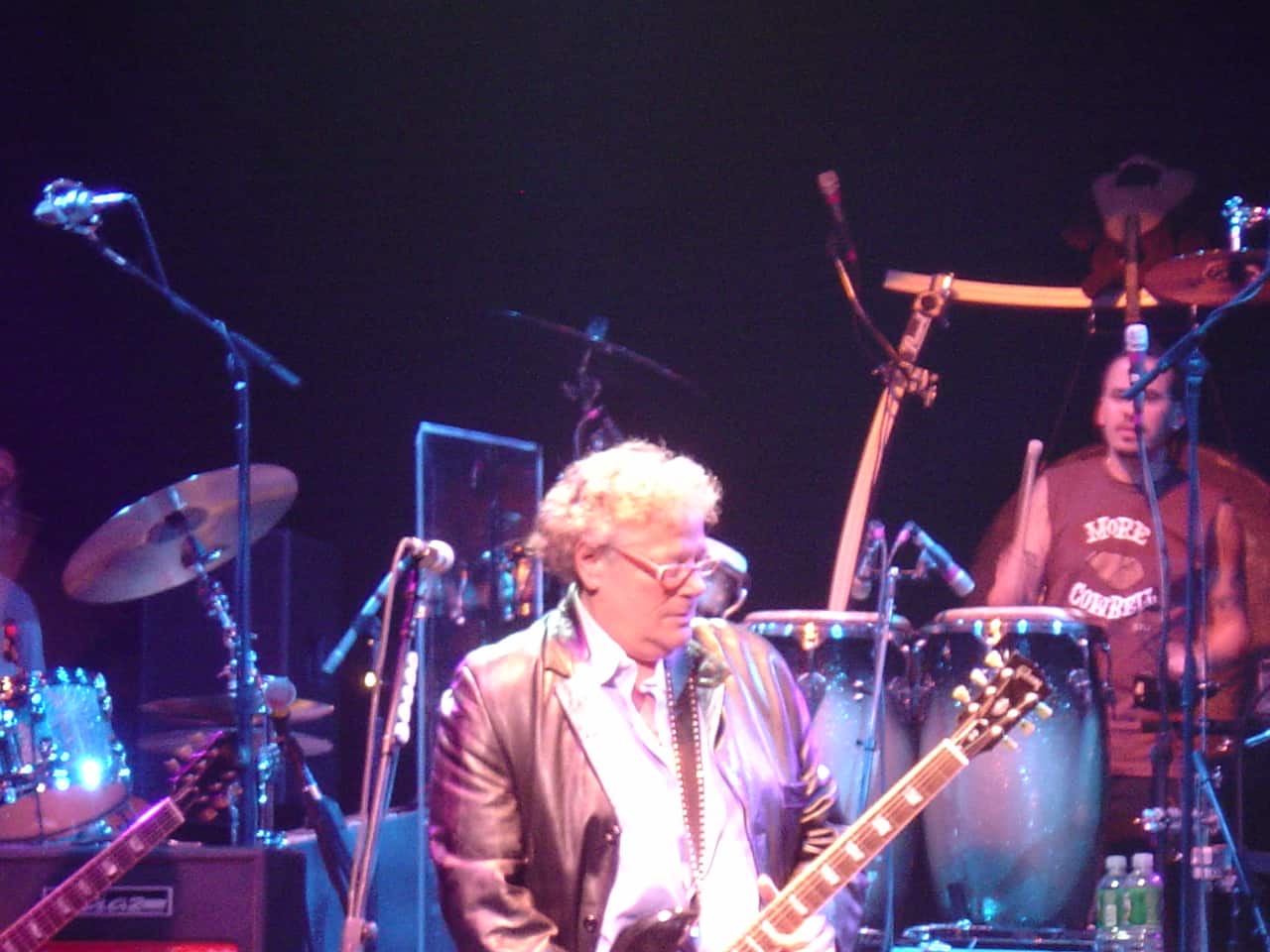 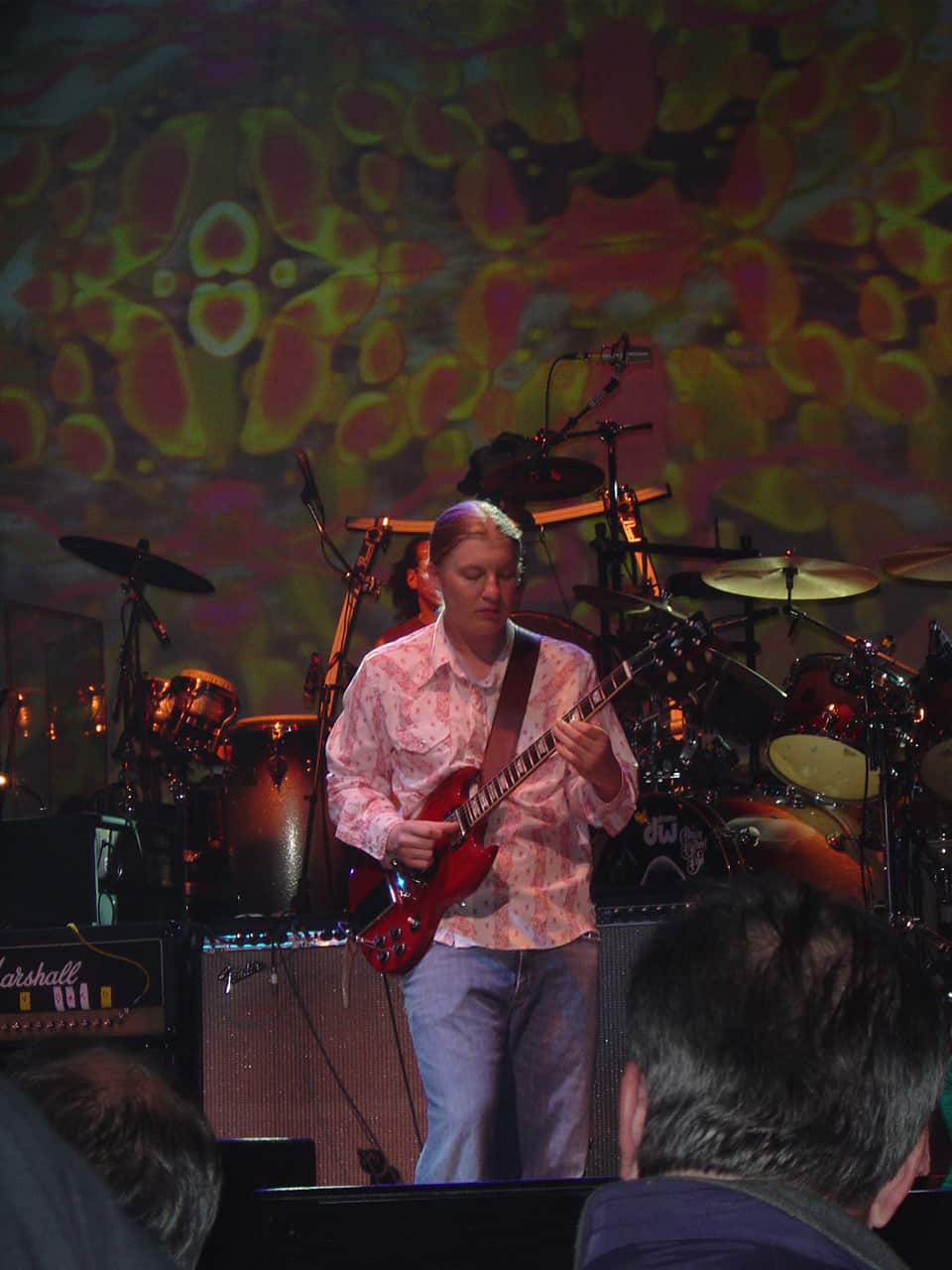 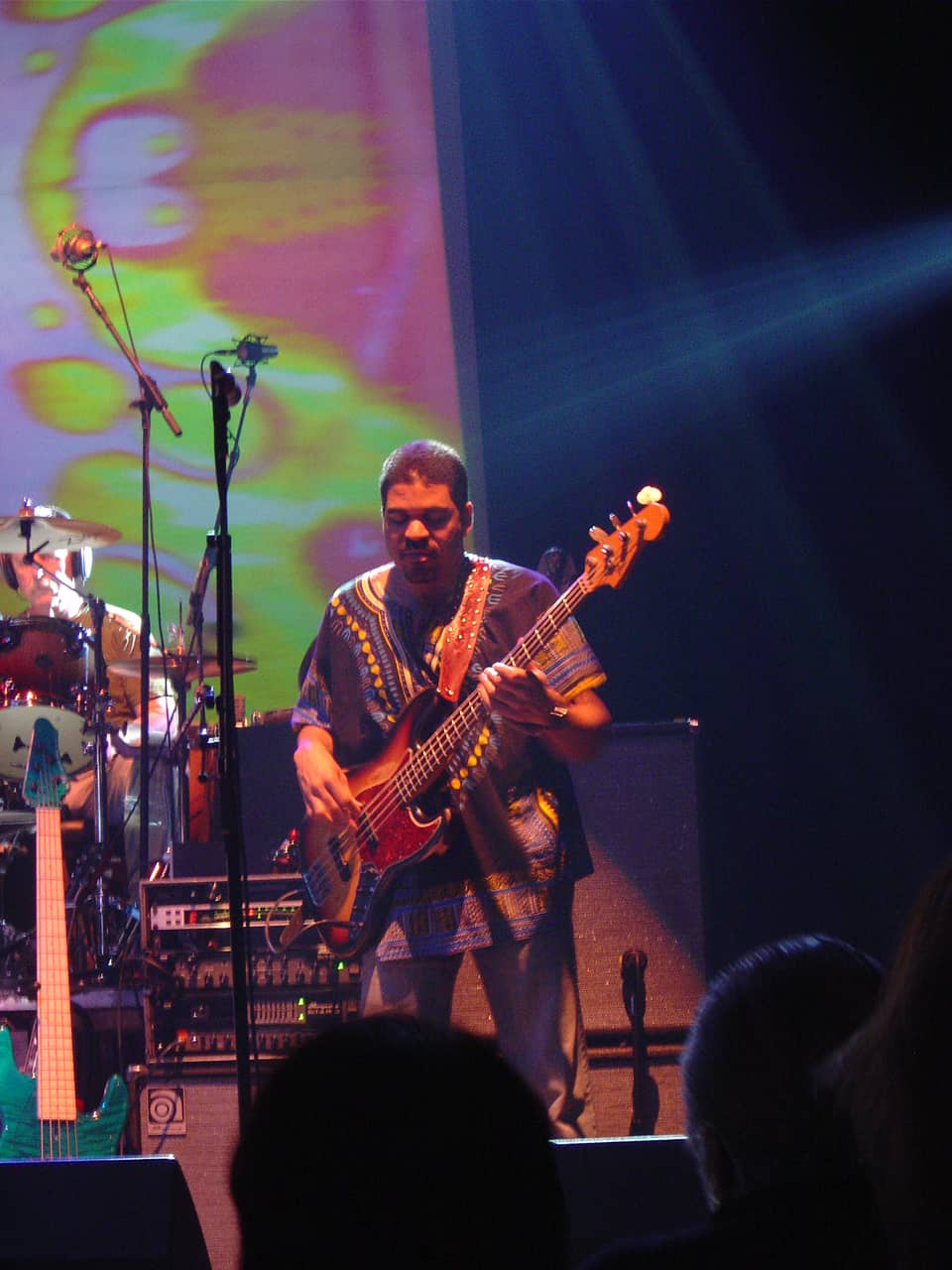 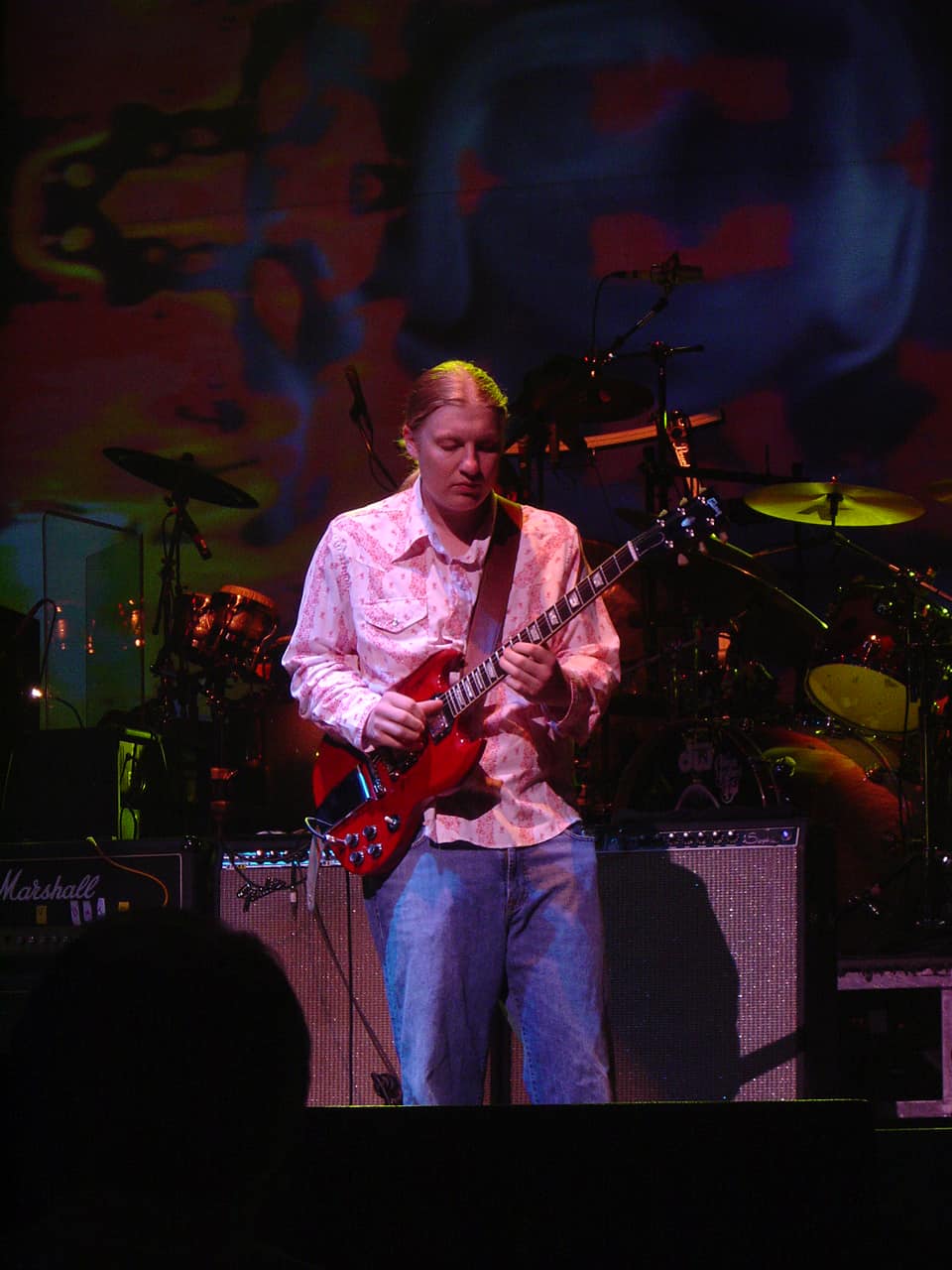 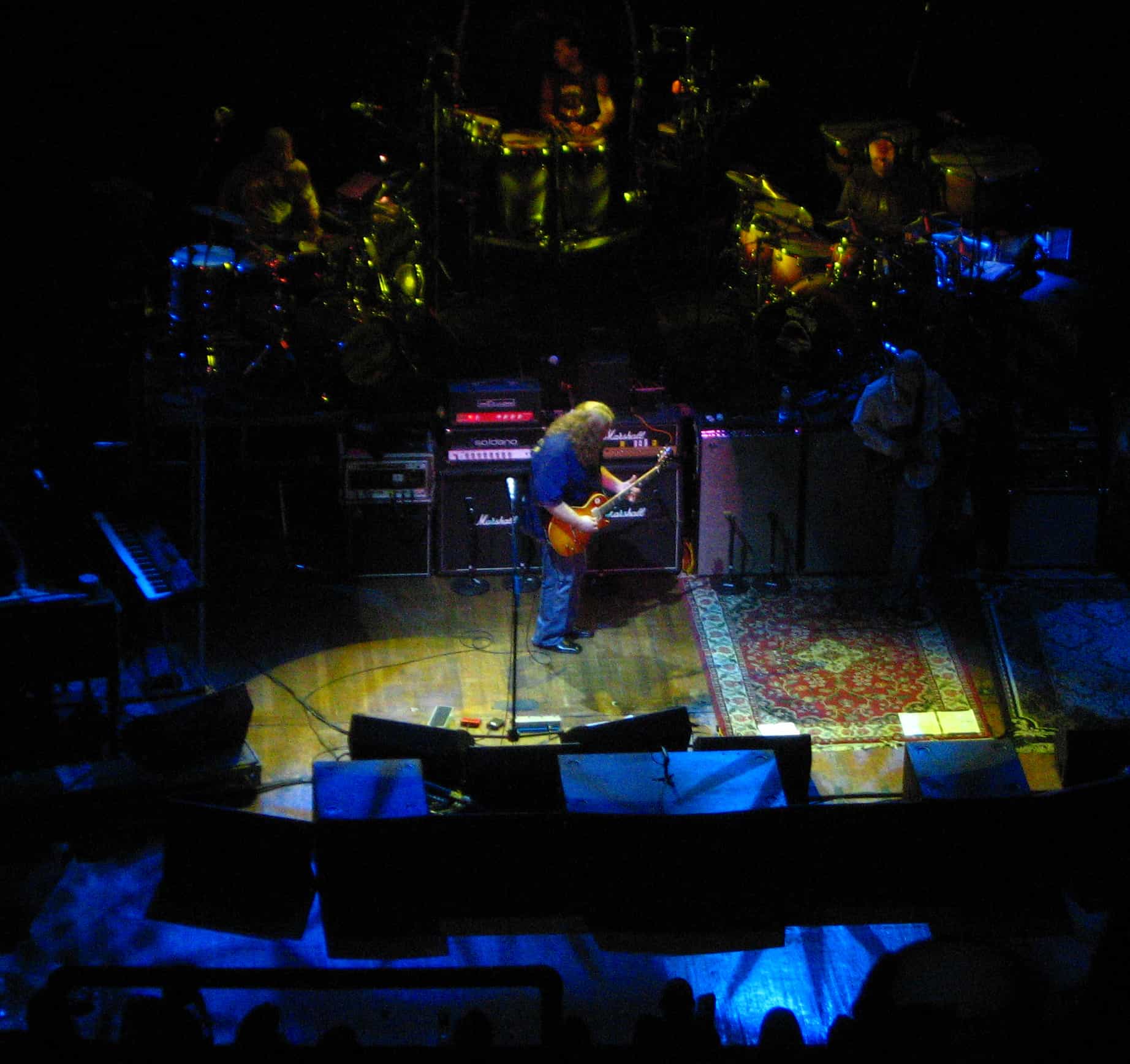 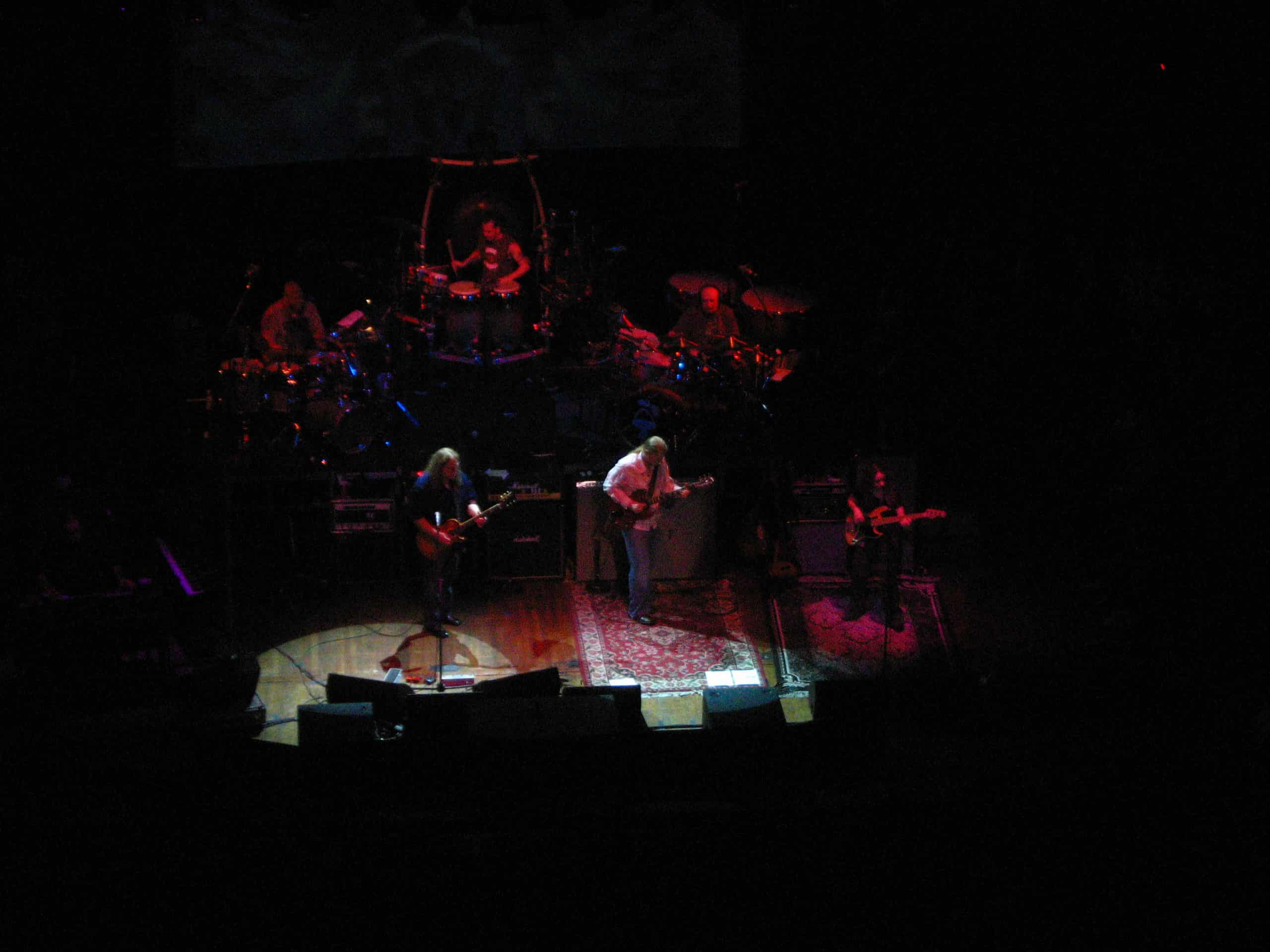 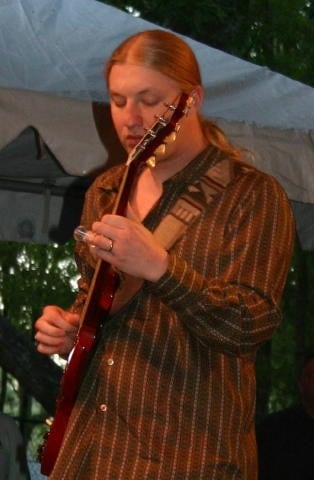 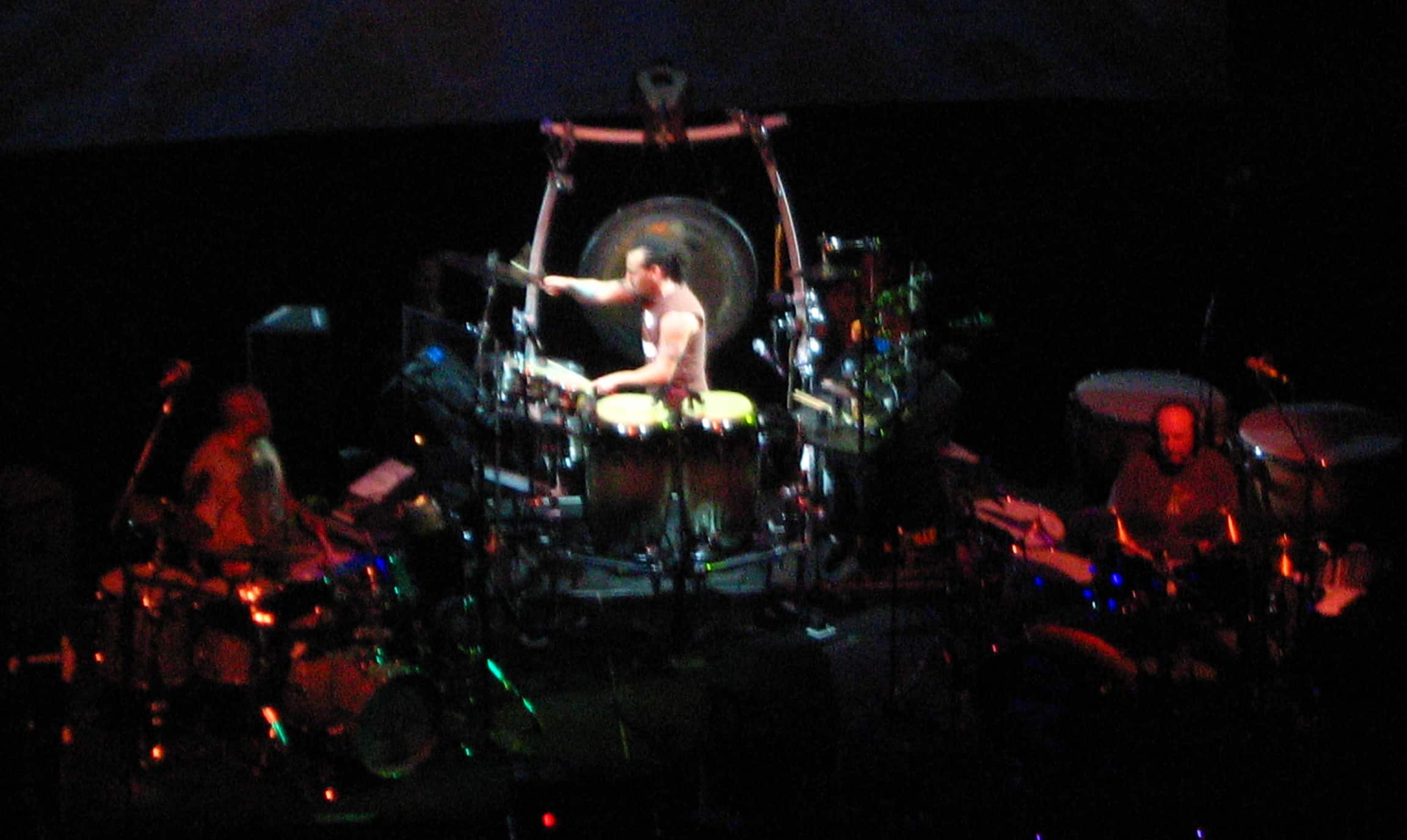 The cavalcade of guests continues; second set, encore bring down the house

You Don’t Love Me

Derek is full and clear from the get-go of “Aint Wastin’ Time No More.” Oteil takes the music round and round; Derek finishes up his solo, signs it, and Gregg nails down the closing vocals. Warren finishes off the song with a sweeping solo, adding a little nasty nip at the end. Smooth opening. Then “Wasted Words,” Warren plays a nice solo that pops its head up out of the song, winning the first ovation of the evening; Derek keeps it going, the band is all over a taut little riff at the end that elevates the song to an early highlight.

Warren opens “Good Morning Little Schoolgirl” with skanky licks, then wears the song like a muscle t-shirt on his solo, which ripples and bulges, raising steam. Derek tosses off a long, elastic tone with an uptick, shaped like the letter L, then takes a solo and the band goes along. You have no idea how fast he has gotten, until the perfect flip back into the seductive riff of the song. Warren sings the final verse, the crowd thinks its over, but Derek and Warren linger over the playout.

The band takes “Firing Line” slower than usual, grounding it in bluesy mud. Warren’s second solo growls. The guitar solo in “Midnight Rider” is nicely executed, with Derek providing support for Warren, then playing his own tart, tangy sour climactic solo. On “Every Hungry Woman,” we’re off to the dog races, as the two guitarists chase the riff around the track. Warren burns as Derek pulls you backward into the rabbit hole. Then more Warren burn, with Derek strumming furiously, then they climb the stairs back on the lick.

The show thus far has been solid, but somewhat lacking in color, in variation of tonality.

“Maydell” swings better now with Warren singing; he seems to have more enthusiasm for the song than Gregg, which may well be why he sings it now. He plays a hard jackhammer solo between the verses, making the song a straight up Warren Haynes vehicle. “Soulshine” provides some welcome major key work, Derek plays a slide solo with the “Crow Jane” feel, then Warren plays an elegiac solo, bathing us in white light.

The band closes the set with “Instrumental Illness.” This is a song that has a very precise sequence of movements. First the riff; then Gregg is featured, on maybe his most improvisational solo spot. Next Derek takes tiny, unexpected steps into a jazzy be-bop slide. Then the song’s licks follow, with Oteil’s counterpoints. Then Warren bounces around inside the structure of the piece. Then the riff again, and the false ending. Then Oteil rumbles out from underneath, and back into the theme. Tight execution, and set break.

The rumor of Leslie West’s appearance has permeated the crowd, so it is only a mild surprise when he is set up center stage for set two. However, Corky Laing’s presence on Jaimoe’s kit (Laing being West’s crony from Mountain, one of the archetype power trios providing the blue print for the original Gov’t Mule) is news. The band eases into “Summertime,” the Gershwin tune from Porgy and Bess that some may remember from Janis Joplin’s soulful version; this arrangement evokes Joplin’s. West is all over it, with a stinging, buzzing tone and a take-no-prisoners attack, ratcheting up the energy level two notches from set one. Warren takes the ball, finds the pain in the song, milks it like a tongue on a toothache, then transforms it from pain into something good. Warren and Leslie are firmly camped out in the big, loud, dumb happy sludge place; with Leslie West on stage, you wouldn’t have it any other way. Derek steps forward, changes up, plays some ethereal gloomy slide, yielding to West. Derek is the blue angel, to the two devils on his left. Suddenly Derek is in that hi-toned, fast easy blue place. West turns his head up, looks at Derek, responds to what he hears , and the guitar guys in the back of the hall whoop it up as West lets loose.

Next, “Born Under a Bad Sign.” Warren and West trade vocals, each singing a verse. The band has morphed into a lumbering dinosaur—a very deft dinosaur. West stings on a blues solo, Warren picks it up, then they take it down with a stomp for Derek. As Derek works his spells, West walks over to him, right up to him, in his face like he’s observing a specimen in the wild, like he’s never seen one of these before. Then he engages, beginning to play with Derek as he steps back. Then Derek and West do the mind meld, meshing and flailing at each other, pulled forward by a sheer powerful magnetism leading back into the song’s riff and close. Whew.

There is a longish break as West and Laing leave the stage, then Gregg busts out “Good Clean Fun.” Derek plays against the song with some elegant phrasing; Warren plays with the song. “Woman Across the River” absolutely smolders, Derek’s solo is killer, and the guitarists fall into especially frenetic, high energy call and response at the end. The song has become a total second set throwdown.

Out of “Woman,” the band stretches into space as a sax is set up, and Oteil is replaced by a bass player none of us know. The teases in the extended between-song space leave no question about what is coming next, and finally everything is set and the band rolls lazily over into the opening to “Elizabeth Reed.” It is a lingering opening, flavored with the sax lines of Chris Barretto, father of salsa great (and Marc Quinones influence) Ray Barretto. Barretto does some sweet, cool jazzy blowing, a jaunty bop over the bass line and drums. An appreciative crowd applauds, and Barretto waves in acknowledgement. Then Derek lays out some long cool Santana-ish lines, playing against the spaces he leaves, at the same time he’s leaving them. (Go try that some time.) Then he rips it up a while; the crowd, now at the band’s mercy, goes nuts. Gregg lays down his solo section, Warren says a lot with a few opening notes, then moves to skipping, fluid lines that ripple through the night sky. Soon he’s spewing white hot needles, tumbling inexorably into drums.

Jaimoe is more forward and assertive on the first section, which he leads. Marc and Butch each take a turn driving the train, the baton passed organically among the three. Then the drums stop for the bass solo.

Tal Wilkenfeld, a 20-year-old Aussie with dreads, is sitting in on bass. She is slight of frame, and when Derek stands next to her he towers over her. She plays a pretty melody over a moving bottom, then her solo morphs into a funk riff. The drums pick it up, Derek comes on, squares off with her, adds sparse rhythm playing, the 5 players over a heavy, murky funk riff. It transforms into the “Liz Reed” bass line, Derek chords, the full band kicks in and a hard close. This slight and unknown player has managed to steal the show in her moment in the spotlight; all around the hall, you hear the buzz: “Who IS she?” At the song’s close, Oteil, who has been off stage, is the first band member to embrace her.

“You Don’t Love Me” is an inspired encore choice. No opening vamp; this version is very much informed by the Fillmore cover they did on the 13th. Derek throws out a flashy note at the end of his solo, the whole band stops a beat in response. Derek casts out lasso notes as the whole band comes to an almost-full stop; he plays over a bed of undertones supplied by Gregg and Oteil, then Warren does the shimmy. The band quickens. Warren is flying; he eases off the throttle, but soon he’s all the way forward again, eases off again. Now the band is riffing out on a new riff, not “You Don’t Love Me,” the music evoking the feel of “Whipping Post” on the urgent parts. Now they’re jamming on that vamp section, Derek and Warren tease out notes over the top, and an exquisite, sublime landing into the chord structure of “Soul Serenade.” Derek plays a lead that is not the “Soul Serenade” melody; Warren plays a counter-melody. Finally the two guitarists meet center stage and play the “Joy to the World” theme to bring song and concert to a close. It may just be the best song of the night, big, long, effervescent.