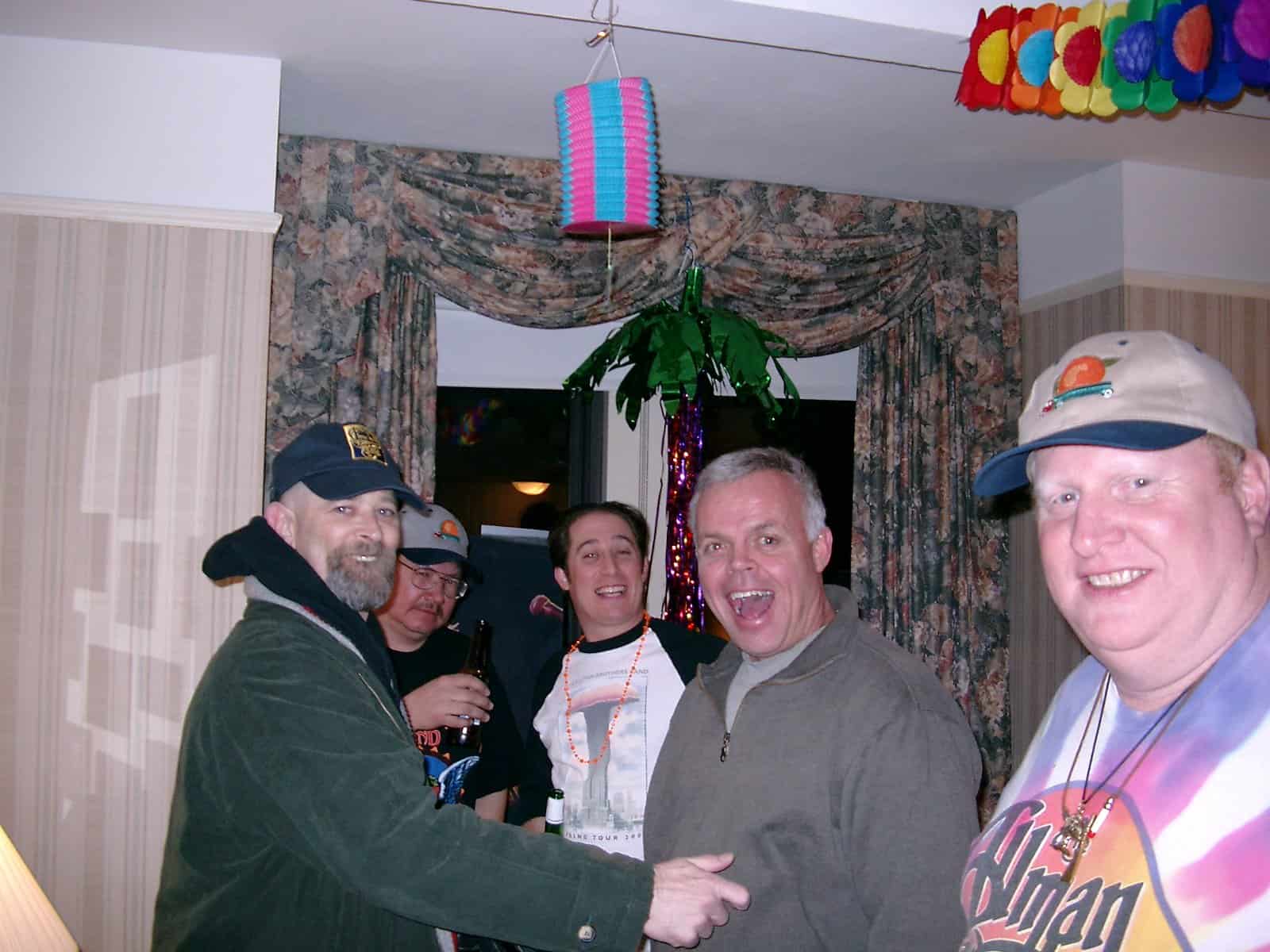 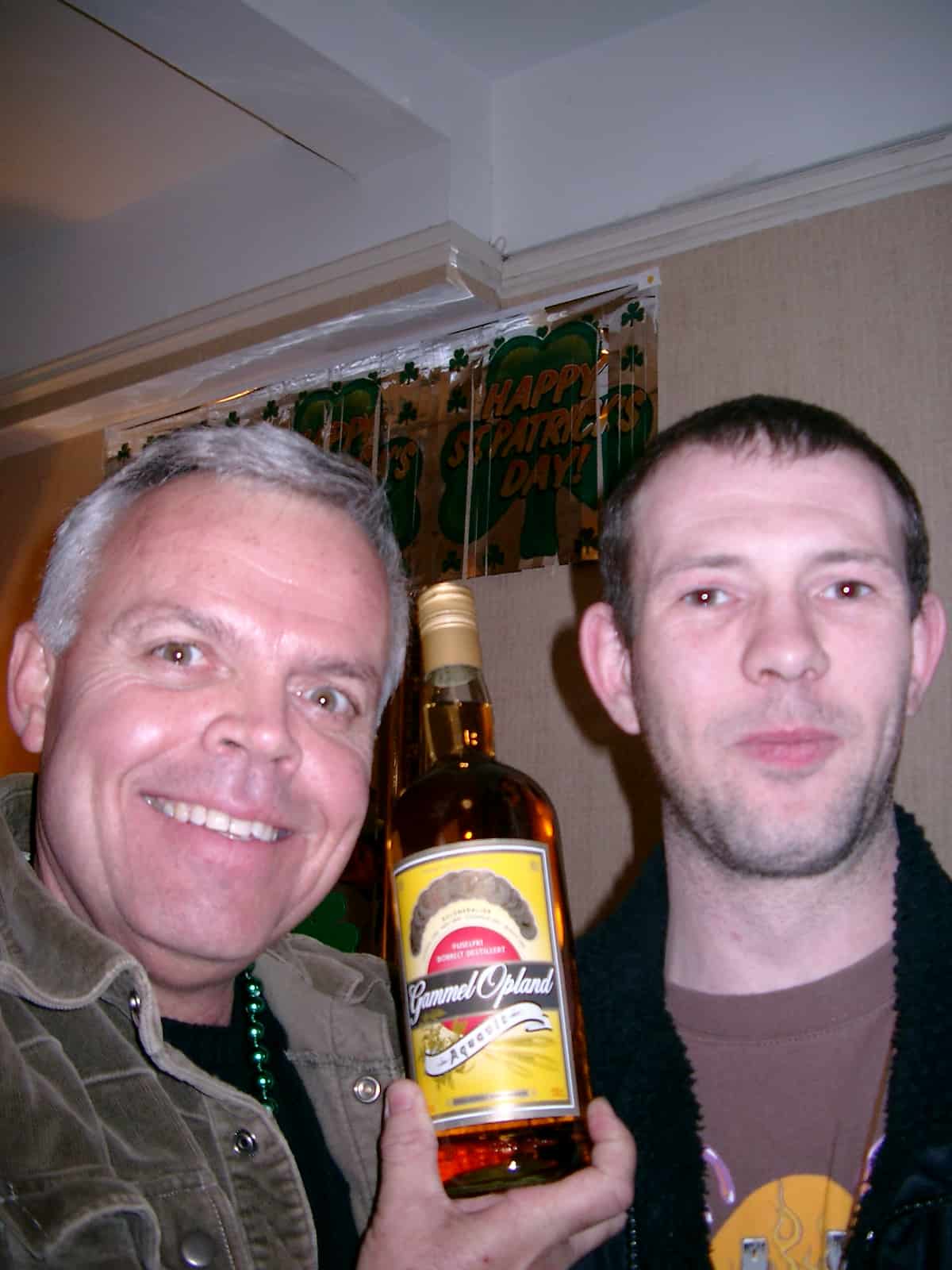 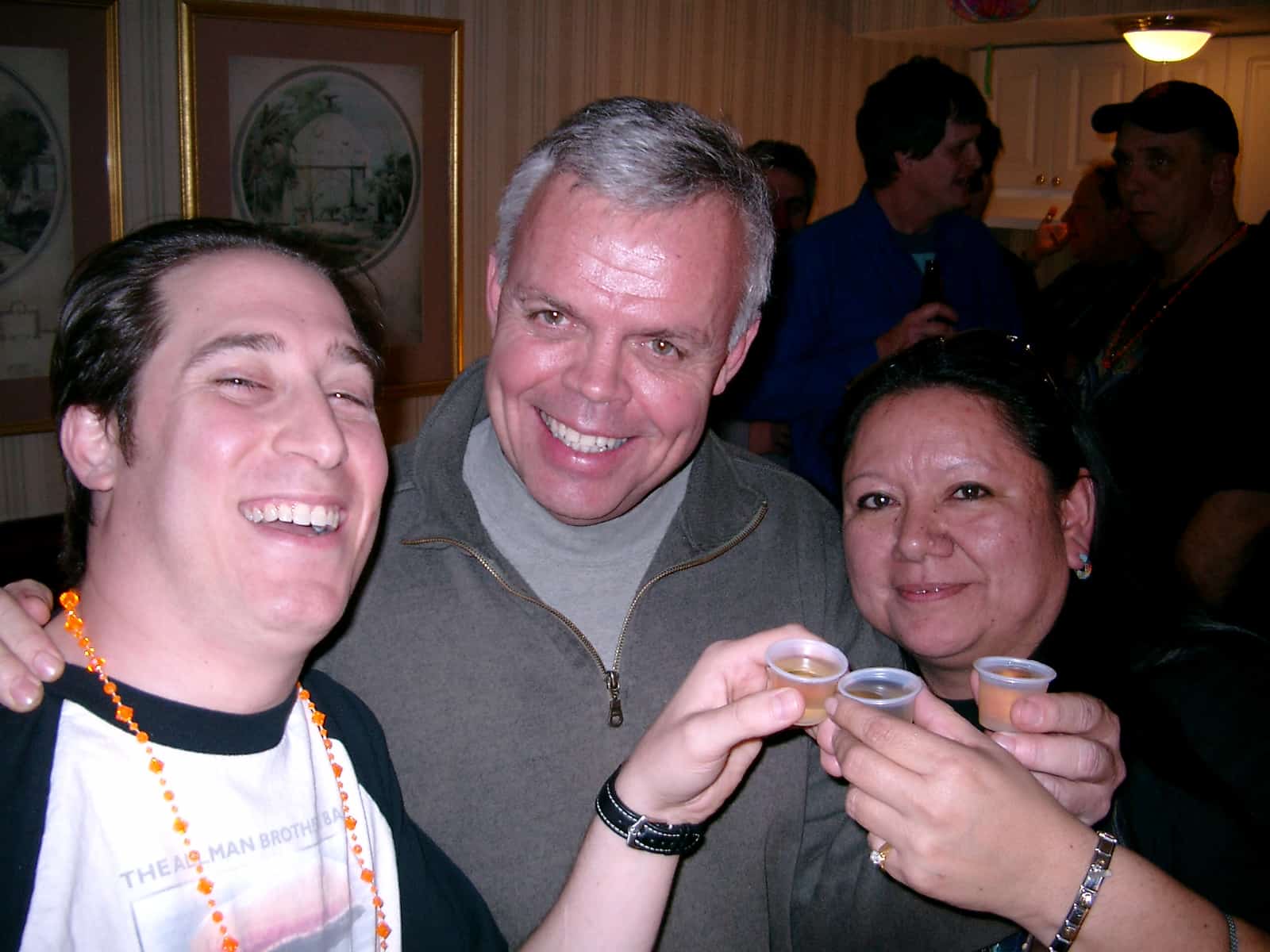 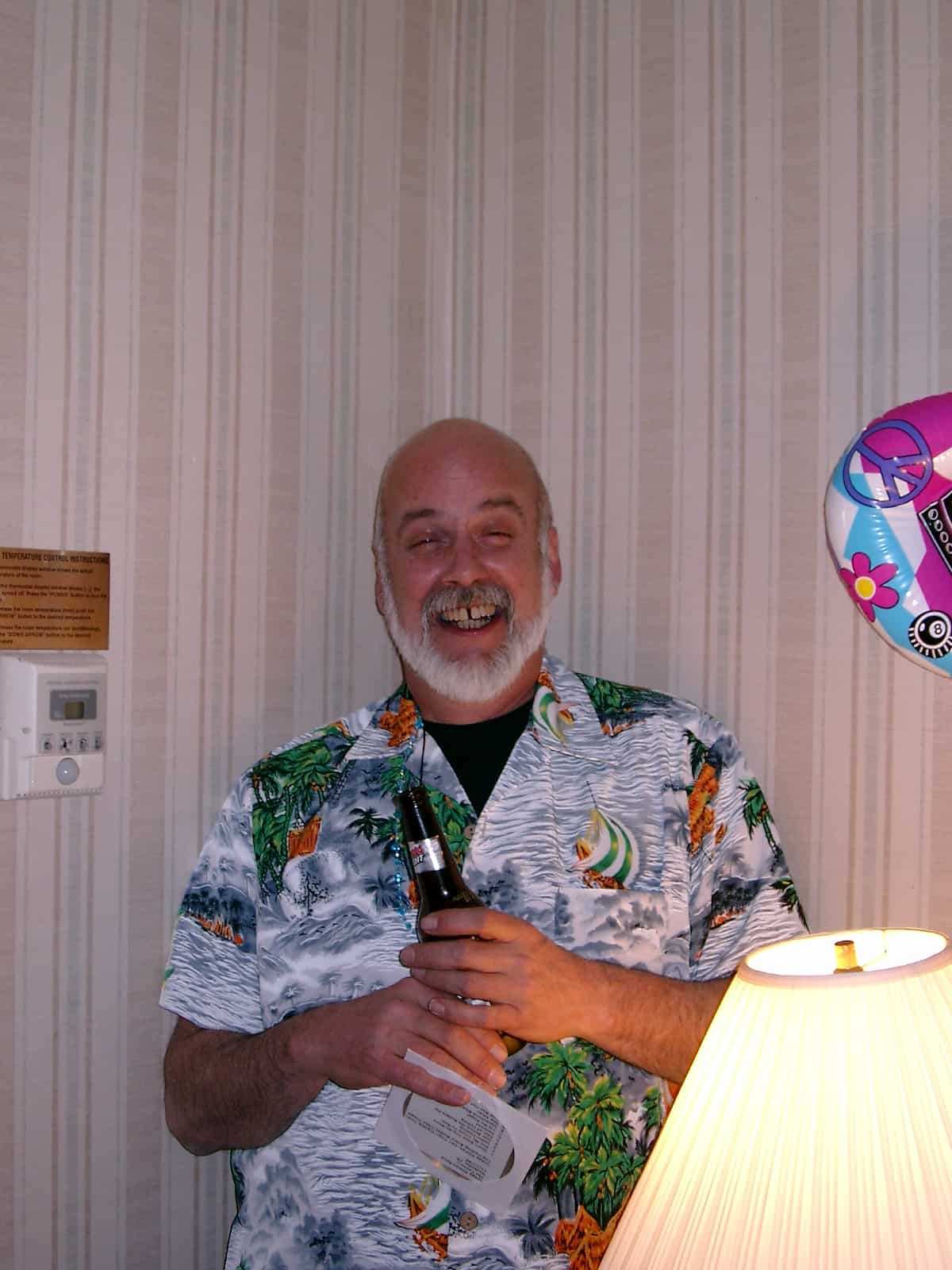 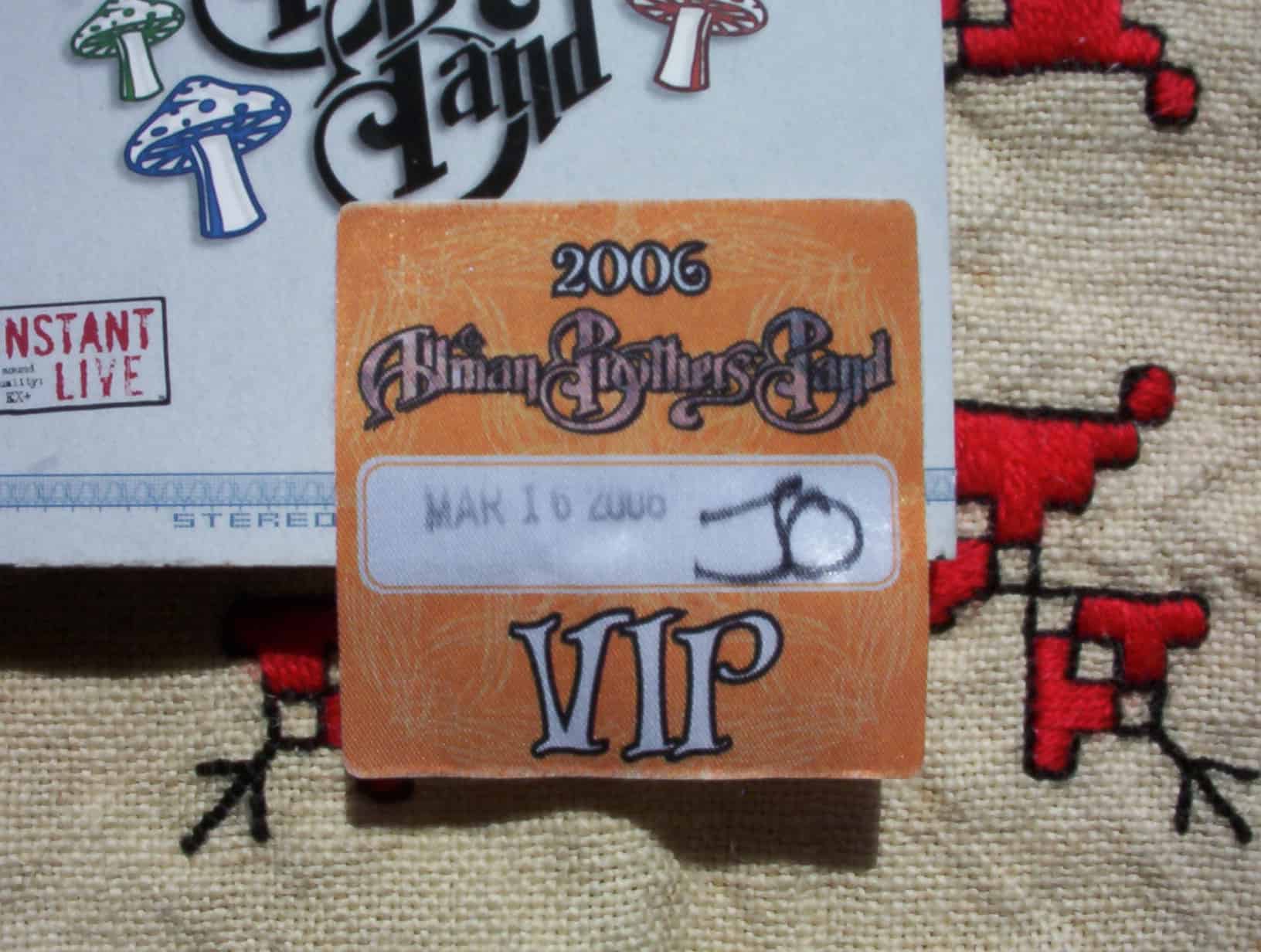 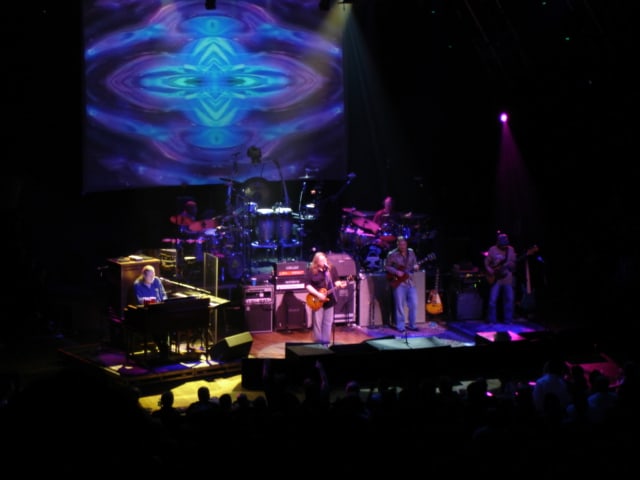 Solid, bluesy outing; “End of the Line” and “Old Before My Time” make first appearances

One Way Out (Robben Ford)

Thursday night is a solid show, the band seemingly laying the groundwork for the big middle weekend. Overall, a very “song-oriented” evening…

“Done Somebody Wrong” starts with just a hard stop-time riff; Warren plays a lingering lead part over the top. After the vocals, Derek works his magic against the band’s taut syncopation. Then Oteil lumbers right into “Wasted Words.” The pyrotechnics really begin after the song is almost over; the band locks onto a solid groove grounded by Oteil, Derek is shredding over the top, Oteil turns clean around and squares off with Butch. This outro section brings the song to a whole different place, lifting the energy up to 10. Or, as I put it in my notes, “whooo!”

On “End of the Line,” Warren shovels coals onto the fire on his solo section; Derek responds with cool mint ripples. The two guitarists trade molten licks on the outro. Next, Warren steps forward with an extended, tortured blues breakdown solo announcing “Hoochie Coochie Man.” Marc provides some cymbal rolls over a hanging note, then Derek takes a turn; more cymbal crashes, the drums enter, and Warren counts in the song proper with nods. It is a powerful, hard driving version, waves of thunder permeating the air.

“Old Before My Time” is stripped down; only Butch on drums, with Marc adding accents for the chorus, and Warren complimenting Gregg with nice harmonies. Then Oteil and Marc join forces on the swinging introductory riff to “Instrumental Illness.” Gregg is featured in the first section, then the band is on a low boil as Derek simmers, then flies. There is major percolation from the engine room on the back line. Warren solos over a jazzy Marc syncopation; Oteil makes the floor shake. Finally after a full stop Oteil starts up the riff that both begins and ends the tune and the band races to the finish line.

Warren does the blue happy dance on a ragged “Highway 61,” before moving to the vocals. Derek’s solo builds on itself, doubles back, gets hotter and hotter. Back into the vocals, then Warren does another dance on the outro. Derek boils over; Oteil catches the fever, riding the very ABB-inflected groove of the song to a close.

On “Soulshine,” Warren plays a cloud-parting solo over Gregg’s B3 swells, then he plays a glorious, muscular solo. Then “Anyday” makes its second appearance of the run, and like the first time it follows “Soulshine” to end set 1. Derek is featured on the song’s licks, Oteil’s vocals are joyous and true, and the harmonies on the chorus are deliriously happy. Warren plays a lead that begins snaky, then yields to glorious colors. Out of the chorus, Derek rides the wave, paints curlicues in the sky. We head into intermission, and even if you don’t know the words, you’re singing “Anyday” to yourself.

“Aint Wastin’ Time No More” is an inspired choice to open the second set. Derek lays out wistful lines between verses, then he hangs out an electric rope of a note, erupting into a catgut solo. Warren wails, offering up a long, rolling solo. “Maydell” is a sprightly take, with gritty vocals by Warren putting the song over the top.

After a quick “Don’t Keep Me Wonderin’,” “Forty-Four Blues” comes on as slow as molasses. Warren punctures the drunken riff with a thick gooey solo, then vocals, then Derek’s turn. The band falls away until they are barely there, a soft but rock-solid metronome, as Derek darts about, fills the room with a big vertical slice of tone. Soon the music has swelled to a monstrous triad of noise on the right (Derek, Butch, Oteil), until it flips over like a perfectly fried egg into the drunken riff. After the final vocal section, Warren, Derek and Oteil all snarl gently at each other. Obviously, and as usual, this is a highlight.

Robben Ford comes out, sets up between Derek and Warren, Derek moving over toward Oteil. “Loving Cup” is a driving three-guitar blues. Ford plays a nimble, quick, confident solo, eliciting appreciation from the guitar freaks in the house. His is the featured solo; Warren, then Derek, then Gregg each take a turn. Ford’s vocals are reedy and strong.

Out of the blues, you can tell by the pre-song steps the players take what is coming: “Elizabeth Reed.” Derek does the dark lady space dance, leading into the twin guitar theme; Ford chooses to chord underneath. Derek takes off on a frenetic solo, to ovation; Gregg lays on the soul, then Ford takes the solo out of the keyboard part and really lets it fly. Warren takes the next flight, pouring gasoline on Ford’s burning embers… then, finally, cooling down to the three-man drum suite called Jabuma. It is a long, dark drum interlude with several distinct movements. Finally Oteil comes on and moves his solo into a riff that gets closer and closer to the “Elizabeth Reed” part; Marc and Warren back him. The band picks up the Oteil groove, and as soon as they have it he tumbles out of it, leading the band into an extended groove vamp. The three guitarists trade increasingly tart licks, then a three-guitar-one-Oteil rumble that shakes the rafters, like a heard of elephants racing back to the song[s theme. It is an especially strong version of “Elizabeth Reed,” largely because the extended explorations out of the drum solo extend the second part of the song, making the return to the theme that much more climactic.

“One Way Out” is a raucous if predictable encore, Ford still on stage with the band. He plays hot, clear ringing blues to round out the evening.

It appears I missed a hell of a show the following night. I’ll try not to miss any more.