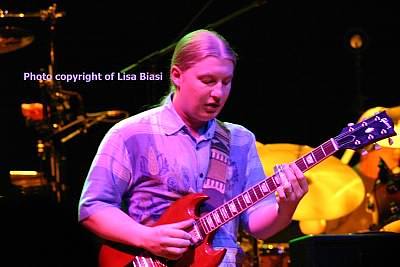 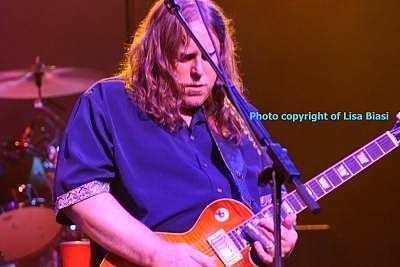 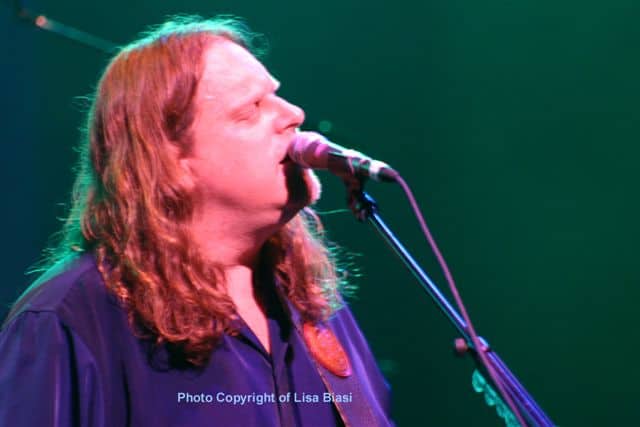 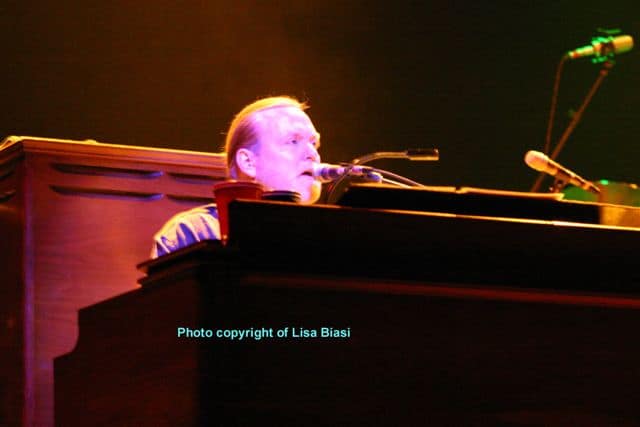 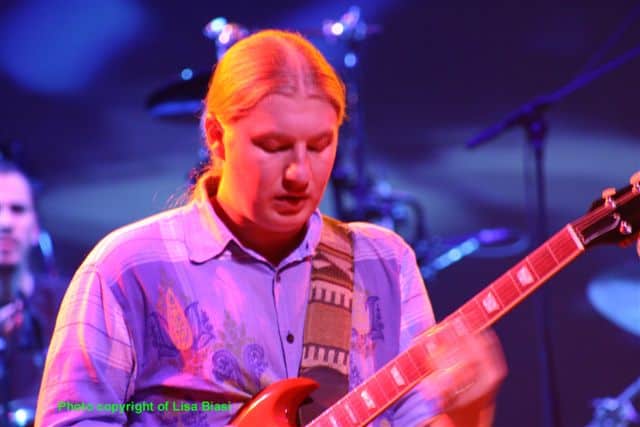 But opening night was just superb. They came out of the blocks firing with Sailin ‘Cross The Devils Sea, and proceeded into a soulful Aint Wastin Time No More. The sound quality from the Beacon was sensational, last year i was quite disappointed at times, but this year sounded great. Gilded splinters was increbily funky. Worried Down With The Blues was fantastic (as always), but they then went into a new instrumental, titled Egypt. Apparently it was wriiten by Oteil. This sounded really good, spoilt slightly by the assholes who felt the need to talk all the way through it (why don’t these pricks stay in the nearby bars). The track really suited Derek’s playing, and with some chord and key changes sounded quite progressive. Hope this appears on a new album, should sound great.
Stand Back, Rockin Horse and YDLM, kept up the frenetic pace. Set 2 though just blew me away. Gregg came out to sing by himself accompanied by piano on Oncoming Traffic (a fave of mine) and a new song called Delta Blue. The latter had some beautiful lyrics, and sounds a cracking little tune. Gregg sounded great (which he hasn’t always done just recently). Then Warren came out and they both played acoustically on These Days. Sweeeet !! Derek and Warren then played Preachin’ Blues, which was just quality, Derek sounded like some old 30’s blues player. A sweet version of Melissa preceeded the best part of the night. Dreams (in which DT just went off into the stratosphere, this song was made for him, surely), and Liz Reed (which must have broken the 20 minute barrier, and without a drum solo). Warren and Derek, just playing the most incredible solo’s, before bringing it home. Ravi Coltrane, son of John, also came out for the two jams, and played some pretty cool Sax. Woman Across The River was frenetic, with both guitarists duelling until DT broke a string (or two), threw his hands up in the air, and changed his guitar, so Warren finished the tune alone. Black Hearted Woman, and the encore Southbound were great to finish the night off. I’d love to hear a copy of the show, even though i might be disappointed with what i hear, perhaps it was the occasion or the atmosphere or someting, but it was just a brilliant night for me, by the greatest band there’s ever been.

Set 1:
Sailin’ ‘Cross the Devil’s Sea
Ain’t Wastin’ Time No More
Walk on Gilded Splinters
Worried Down with the Blues
Egypt
Stand Back
Rockin’ Horse
You Don’t Love Me

It was unseasonably cold outside as Gregg limbered up under the support of a flashlight focused on the keys, then led the band through an opening “Sailin’ Across the Devil’s Sea,” a song that had been recently absent from the set. It was a rough, hard, dissonant take, and Derek’s lines perfectly matched on his solo. After a brief false start by Gregg, the band rolled into “Aint Wastin’ Time No More,” with Derek’s fluid lines accentuating the vocals and the mid-section solo, and Warren’s outro lead especially biting.

Right out of “Aint Wastin’ Time,” the band’s percussionists go hard into the percolating gumbo of “Gilded Splinters,” laying down a bed of funky drumming dirty rice. Last year this song seemed to be about twin guitars and vocal harmonies; tonight the drummers ruled the roost, Haynes drove the song with a stinging riff, and it was an early highlight. Marc is especially animated, flying cross his kit. When Derek finally joins the fray, his guitar is snapping like an alligator. The whole thing was drenched in a swampy vibe.

“Worried Down With the Blues” is up next. Derek plays the talking blues, his guitar imitating the sound and intonation of a human voice. On Warren’s solo, he makes a point or two himself, before making his way to higher ground. It is a musical conversation on two levels. Meanwhile Oteil is rocking and swaying underneath it all, providing the lubrication.

Next up is the new instrumental, apparently written by Oteil and called “Egypt.” Marc heralds the opening with a ringing percussive riff; then there are lush, melodic jazz chords. Warren plays the theme, running through it once; the song is upbeat but slow; the sound of the chords makes it happy, but the cadence says the band is in no hurry. Then Derek joins Warren on counter-melody, leading into a slow but peppy part, with Oteil, rumbling underneath, adding to the harmonics with sounds you can hear and other sounds you can only feel. The song’s melody is constructed largely from the jazzy dramatic chords; soon Derek is layering a solo over the top. Oteil is off and running with the guitars, his eyes closed, his gaze skyward; the bottom is a third stringed voice, making the intra-guitar harmonics that much bigger. Warren spatters notes over some furious Derek chording, the rhythm section locked on. Then Warren hangs one, a big juicy transitional note that just sits there a spell, giving way to some improvisational jazzy space. Oteil remains prominent, the chords of the theme are played again, and twin guitar lines– melody and counter-melody– bring the song to a close, a hair longer than 20 minutes after it has begun. This is the first instrumental written for this line-up that features guitars; “Illness” is very much a bass and drums showpiece. It is fresh, new, and you know by September it will sound very different (it might even have a drum solo in the middle). But no question, it is a highlight, unlike any other of the instrumentals in the band’s catalog.

“Standback” is up next; then the band lights into “Rocking Horse.” The latter is a typically powerful version, Warren exciting the crowd on his solo via the device of double-timing his solo toward the end. After the hand-off Derek sprinkles notes like he’s sanctifying the space; eventually he’s playing at the speed of sound.

Right out of ‘Rocking Horse” is the extended vamp that presages “You Don’t Love Me.” The band lands hard on the groove and stretches it out; Derek tosses off a pre-song solo. Oteil continues to rumble; it seems as if more of his sound than usual is occurring below sea level. It is a killer shuffle that Warren extends when the band hints at flipping over into the song proper. The whole band is locked in, Oteil testifying on bass, Butch and Jaimoe in the zone, until finally the dual licks that mark the beginning of the song proper. Warren plays the blues; then Derek plays a fiery, muddy, devil solo.

The second set begins with Gregg, alone, at the Grand piano on the right side of the stage. “Oncoming Traffic,” from the ’74 solo On Tour album (also recorded by Bonnie Bramlett) is soulfully sung, with piano playing to match. When Gregg announces that the next tune– “Delta Blue,” if you believe the setlist– is a new one, and begins singing and playing like you’re in his living room, I suddenly find myself thinking: is Gregg woodshedding, live? Is he now so energized as to work new material out live and solo? It is a cool treat, and you can be certain that in subsequent acoustic sets this run, there will be other songs in this slot. Gregg is clearly feeling it.

Next Gregg straps on the acoustic guitar, and he’s joined by Warren for Jackson Browne’s “These Days,” a song Gregg has already made his own on Laid Back and subsequent tours. Warren joins in on harmony vocals, and his breezy solo lends sentiment and beauty to the tune.

Derek is on electric, and Warren on vocals and acoustic, for a gutbucket take on “Preachin’ Blues.” Derek’s slide, electricity notwithstanding, is straight out of the thirties.Tasty.

After a rather long pause, the band counts into “Melissa– Gregg and Warren on acoustic, with Oteil and Butch. Warren hits the note in the latter stages of the closing solo and rides the wave to the finish. The setlist calls this song electric, but it is more a transition from acoustic to electric. Overall, on this first night of the run, the acoustic set was a collection of treats, but collectively suffered a little from pacing issues. I’ve no doubt this will be ironed out as the run goes on. Ravi Coltrane joins the band for the return to full assault, and we are into the waltz-time of “Dreams.” ‘Trane takes the first lead, and he blows a hell of a solo, notes everywhere, but still vaguely, barely waltz time. Warren takes a solo; then Derek plays some straight blues, a far less improvisational approach to the song than he usually takes, probably because he prefers the single soloist approach to the piece.

Out of “Dreams” the melody lines cascade into transitional space, the drummers add flourishes, and then the band formally kicks into “Elizabeth Reed.” Oteil, Coltrane (how cool does that look in print?), and the drummers lay down some funky rhythm space. The rest of the band shakes and shimmies on top. Warren saunters over to Oteil, and there is a moment in time where Oteil is emanating, just emanating, and Warren is right next to him, absorbing. The attack of the jam in the song’s mid-section flies headlong into a collision course with a drum-and-bass interlude, not so much a drum solo as a rhythm break. The other players do not leave the stage. Derek adds some chords to nudge the sprightly jaunt back towards “Elizabeth Reed,” and a hard, emphatic finale. It is a hell of a take.

Warren scorches on “Woman Across the River.” Derek does as well, and the two trade hot, sweaty lines. Warren pulls off a “can you top this?” burst, and as he finishes Derek busts a string. He raises his arms in mock anguish, missing out on his last licks as the song comes around to the end vocals before his new guitar is in place. It is a funny moment.

“Black Hearted Woman” is the vehicle for tonight’s formal drum solo. There is no bass section. The drummers have already shined on several songs (“Splinters,” “You Don’t Love Me.”) The drum break is hard-driving, as is the coda to the song. “Southbound is the encore.

Overall it is a solid first show. There were some issues of pacing, especially around the acoustic portion and the second set; “Black Hearted Woman” and “Southbound” seemed a tad anti-climactic in the scheme of what came before. But “Egypt” was a dandy surprise and highlight; “Gilded Splinters” was a revelation, and “You Don’t Love Me” and “Elizabeth Reed” rocked the house. Oh, and the acoustic set… I can’t wait to see where that goes.