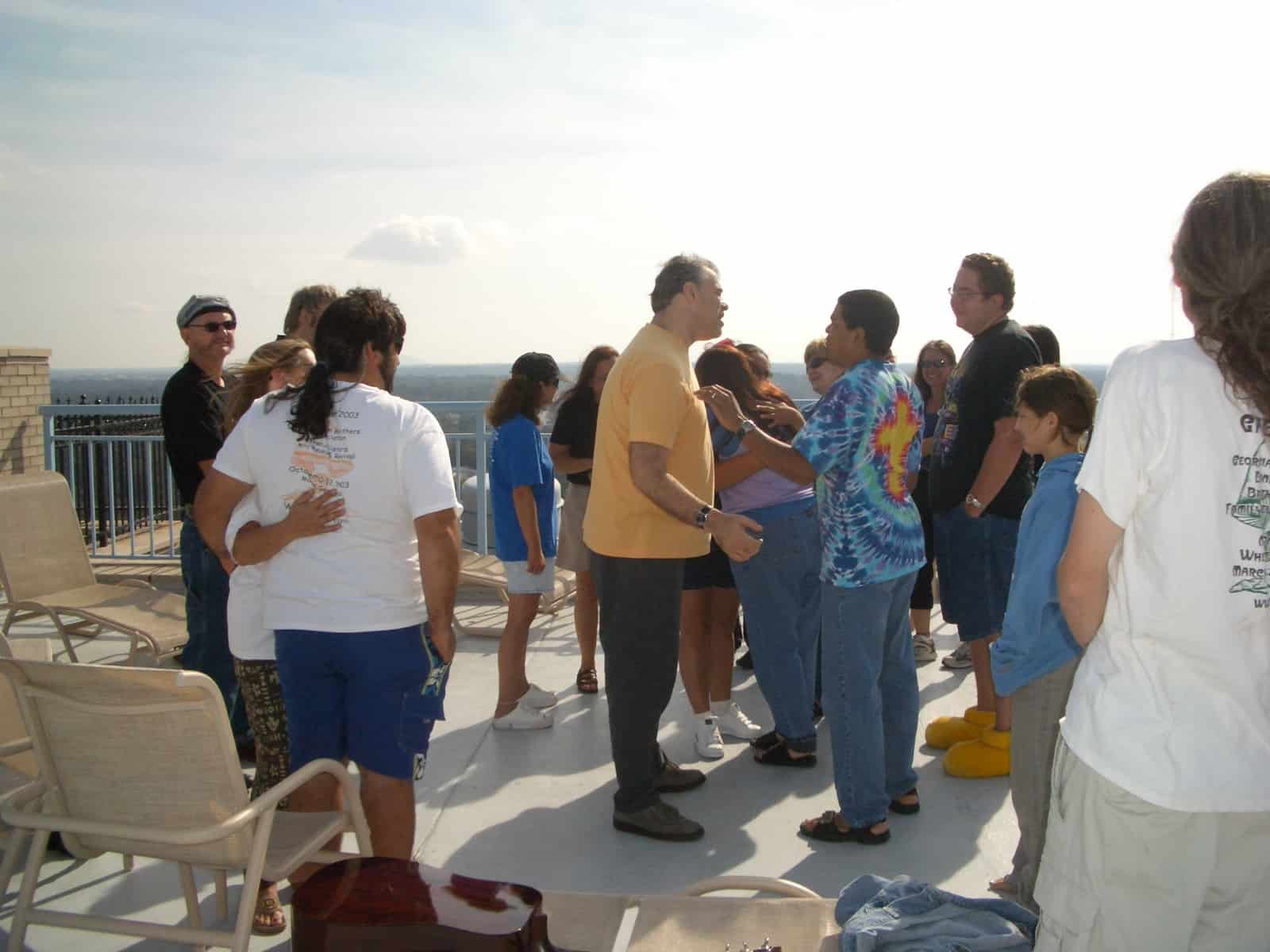 For the select few of us who were able to drag our happy but over-extended butts out of bed early enough, Sunday began with a 9 AM prayer circle led by Lana and Oteil, in a square on the roof of the Georgian Terrace hotel. Beautiful blue Georgia sky above, the Atlanta skyline all around, the city still, a brisk but gentle breeze hinting at the Indian summer day that was ahead. Cleansing, redemptive, and non-denominational. People can you feel it, love is everywhere. Say amen, brother Oteil.

The third and final night at the Fox kicked off with “Revival.” Love was everywhere as the crowd sang along with the “People can you feel it?” lines. The song is propelled by hard, driving chord work. A tough “Every Hungry Woman” is next, Derek wailing, Warren tosses off his first biting notes of the night. The drummers are bopping, swinging the tune forward. The guitarists lock into a groove and exit the song on a two-line guitar lick.

“Done Somebody Wrong” is a taken at a slower pace, rendering it more of a shuffle than a stop-time, Derek leading into the vocals with bouncy cascading blues lines reminiscent of Elmore James. “Hoochie Coochie Man” begins with the now-standard Derek/Warren volley that turns into good-natured duel. Warren playa a slide solo largely in the traditional electric blues style. Derek steps up and responds by departing from an “Amazing Grace” foundation. Warren ups the ante, his glass slide flying across the strings. Then Derek plays a sort of “Amazing Grace meets the King of Tone” burst; he crosses over into the stratosphere, then tosses Warren the hot potato. Warren takes it and drives it solidly into the ground, planting the stake off of which the band launches into that climbing, thundering opening riff. Oteil anchors the proceedings, Derek plays a fat, glassy slide over some nasty Warren chord work. Warren eschews the slide for a nasty blues solo, the instrumental counterpoint to his cocksure vocals. The mix in the house is spot on, and the band sounds about a hundred feet tall.

Next Warren plays the by-now familiar blues intro to “Desdemona,” a song that two band members have told me is the best song Gregg has written in years, and one that ranks with his early classics. After his gut-wrenching vocals, I write down that “Gregg plays tasty keyboards over the ‘My Favorite Things’ vibe in the mid-section.” As I write, in one of those moments of synchronicity that happens when band and audience have established a tangible connection, Derek tosses off the “Raindrops on roses” lick from that very song, just ever so quickly. He waltzes away from it, then comes back and plays it again. Derek flies, fusing jazz and blues, deep into improvisational jazz territory, soaring, crying. Is he playing “Desdemona” or “My Favorite Things?” It doesn’t matter. Oteil and the drummers gallop on, either way. There is a tasty transition riff, then Warren slowly crafts his piece, going heavy with a “Rocking Horse”-style attack before pulling up, steering the song back towards the blues. There is a soft landing on the last note of the solo, which is also the first note of the second bookend vocal portion of the song. Gregg’s singing is simply beautiful. The song is a highlight.

On “High Cost of Low Living,” Derek takes both wistful solos out of the verse. He paints with gentle strokes to accentuate Gregg’s singing on the verses, then switches to a bigger brush as he cuts a swath across a bigger canvas, particularly on the second solo. The crowd is mellow—this is the second “sitting” song in a row—but Derek’s playing on the outro seems to go on and on, an outstanding display of color, to song’s end.

Instead of bringing the crowd to its feet with a short, up-tempo number, the band plays “Forty-Four Blues,” a song where they manage to wrap the huge rock bombast with such soft, deft subtlety that if you aren’t listening, you might miss it. Warren‘s vocals ride over the bouncy riff. Then he solos over the riff as it grows increasingly dissonant. The band slows as Derek steps to the fore; his playing is like a sonic wisp, there and not there, breathing slowly and making full use of the notes he chooses not to play. The band picks up the pace, pushing Derek back into the frame; they are on fire, flying headlong, wheels barely staying on, into the one note that flips back into the wobbly drunken main riff of the song. As usual, executed on a dime. The crowd appreciates this feat of musical derring do. Warren squeezes out sparks on the outro, then harmony licks with Derek, Oteil underneath, as the band… slows… to… a… stop.

A welcome “End of the Line” features a nice guitar interlude, then Gregg embraces the verse, then Warren shreds. Then “Dreams,” the only song the band has repeated all run, breaking it out for the third night in a row, and after Jack and Derek each had a go, it is Warren’s turn. Warren approaches the song in a more aggressive style than either of the other two soloists we’ve heard this weekend; Derek tends to play one long slow build, but Warren hits crescendos throughout his solo. He is more sustained, more high-energy throughout. His is the bluesiest read of the weekend, culminating in some sweet, fragile slide work before Gregg enters for the final verses. The house mix, outstanding all weekend—nice job, Slim—is notable on this kickass set closer, as the band sounds so BIG slamming the song to a close, occupying so much space it is almost daunting. Like I said, 100 feet tall.

“Gilded Splinters” opens the second set, beginning as a showcase for the drum section with an extended percussive workout. Then the axes lean into the dirty rice lick, and then the vocals. Derek solos with Warren chording underneath, then another drum interlude, then Derek and Warren engage in a duel to ride out the song into the group vocal section.

The band eases into “Stormy Monday,” much to the delight of the audience. Warren’s deft chord work defines the song, Gregg’s organ swells over the top are a thing of beauty. Then he rips into the vocals—Gregg has been top-of-game all run—with some outstanding blues singing. On the solos, Derek makes beautiful use of decay as his fat, juicy notes melt into one another. He smokes. Gregg lays down easy, swampy B3 fills on his solo; Warren stings on his (Warren’s tone has been biting and stinging all weekend.) His solo is electrifying, and brings appreciative applause as Gregg wraps his pipes around the final verse.

Warren brings out Rob Barraco for “The Same Thing.” Barraco tinkles the ivories in a typically upbeat solo, giving way to Warren, who plays long, bent notes. Then he steps to the mic for his gravelly vocals. Warren plays some more lead lines out of the vocal section, then Oteil offers up the funk over a light drummer gumbo, the funk that flips the extended jam of this tune into hyperdrive. Barraco does a visible double-take at Oteil’s hard bop-style soloing over the band’s collective din.

Barraco provides some pounding keyboard work over Oteil’s rollicking bass line. Derek takes a solo, Barraco still prominent in the mix. Then a Derek/Rob/Warren round robin, the song going on and on. Derek wails, the crowd erupts. Oteil (with Warren) brings the jam session back to “The Same Thing’s” familiar chords for an emphatic close.

The band emerges from the wake of “The Same Thing” with some spacy mist, finally turning it over neatly into “Elizabeth Reed.” Warren plays some exploratory lines pre-theme, his tone clear and cutting. Derek steps up and, predictably, takes a sharp left turn. The drums come along for the ride. Finally, several minutes after they begin the song, Derek finds his way to the theme, Warren joins him, and the two guitars are wrapped around that classic lick. For a moment something shifts in the house mix, the left side gets louder. A minor bug.

Gregg and Rob solo together, finding space amidst the insistent guitar lines. The keyboard tinkle gives way to a Derek solo, and the drum section—Jaimoe shining—locks in. The whole band locks in on top of the drums. The drummers cool the mood as Derek improvises over the top, no Oteil. Then a new take on the melody, the rest of the band following. Derek careens forward; as the band slams back into the riff he almost shows emotion. The baton is passed to Gregg, whose solo is accompanied by Derek’s chording. Oteil thunder keeps the wheels on. Next Warren solos, a slow boil into which he tosses a “Les Brers” tease. Warren squares off against Oteil as they meld together; he trades licks with Barraco and everyone jumps on the groove as the duel becomes simultaneous playing, pushing against each other. Derek chords a section, then the band hits the riff hard and we are into the drum solo.

The drum section tonight is particularly long and inspired and furious; the give-and-take of energy with the crowd is palpable. Jaimoe seems especially driven. At one point the rhythm ebbs low, then Butch hits the timpani to kick things back into high gear. Marc accents the driving beat over the top toward the end, then the frenetic percussive machine screeches to a halt on an Oteil bomb of a note.

As the roaring ovation for the drum solo subsides, Oteil is playing a perfect, gentle, delightful “Georgia On My Mind.” It is the perfect thank-you and cap to this three night run. Then some scat, and then the band is back onstage and hitting the riff that brings “Elizabeth Reed” to a brisk close. After so much activity, the short final section seems abrupt.

“Please Don’t Keep Me Wondering” is a sprightly ditty that seems odd at this late place in the set, and serves as an opportunity almost to recover from the “Elizabeth Reed” onslaught. Then right into “No One Left to Run With,” The driving Bo Diddley beat of the song ends the set on an up-tempo note.

The setlist on Saturday had “Whipping Post” down as the encore, before they switched to “Layla.” Now, after three nights, there was very little doubt what the encore would be. Oteil rumbles into the classic bass line that heralds the song, and it is just as it should be—“Whipping Post,” last song of the run. Derek takes the first solo and offers up an “Afro Blue” tease in the middle of torrid, dark soloing—not really a solo though, its more like the whole band is a big solo. Again, the confluence of playing, hearing, and house mix are just right, and the song fills your consciousness.

After the first set of verses Warren takes a solo, starting sparsely, working to a hard-boiled finish all the way up the fret board. It is a full-on solo, wringing all the pain of the song out of that poor woebegone ax. The whole band is in the pocket, and it is a dark, foreboding, redemptive, and spot-on climax to three nights of Georgia heaven. We stream out into the soft Georgia night, musically and spiritually cleansed.