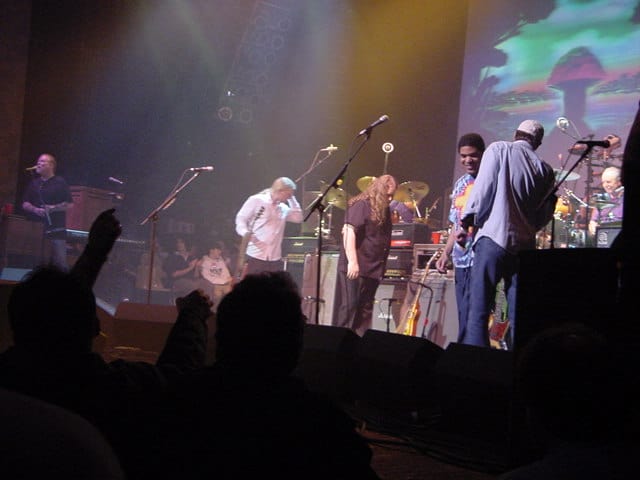 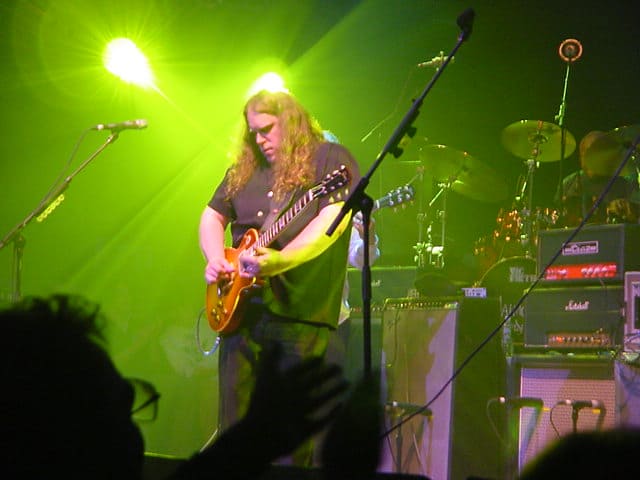 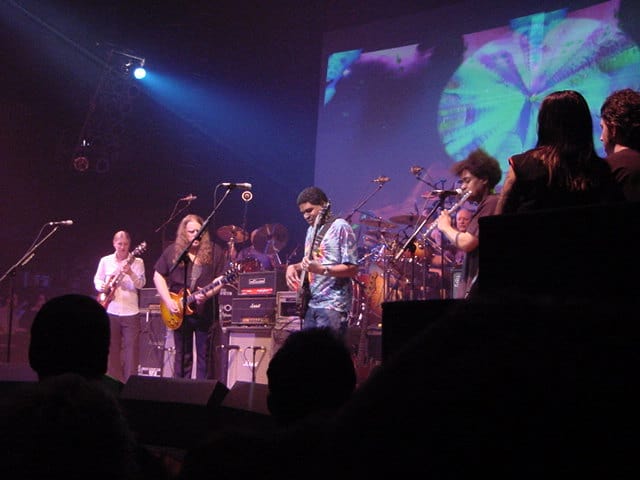 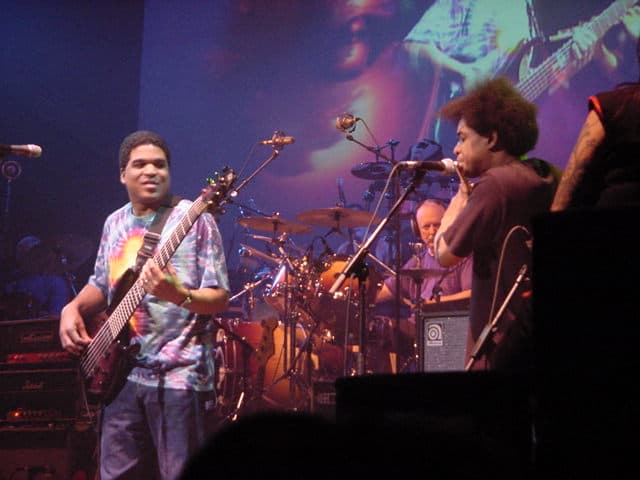 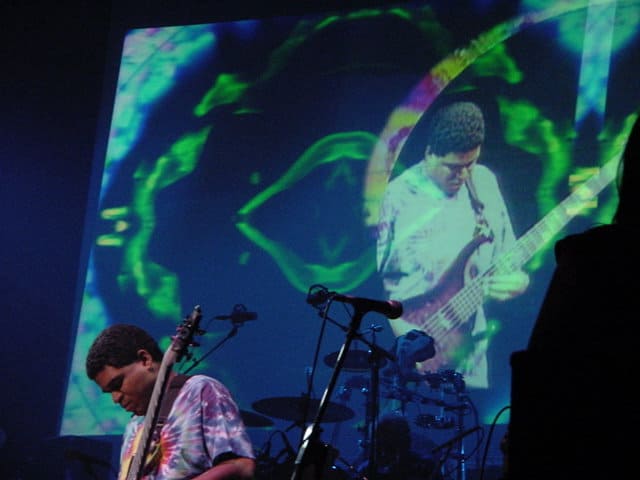 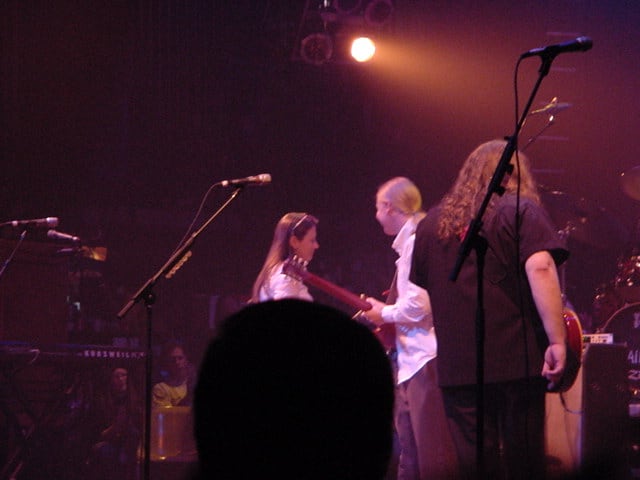 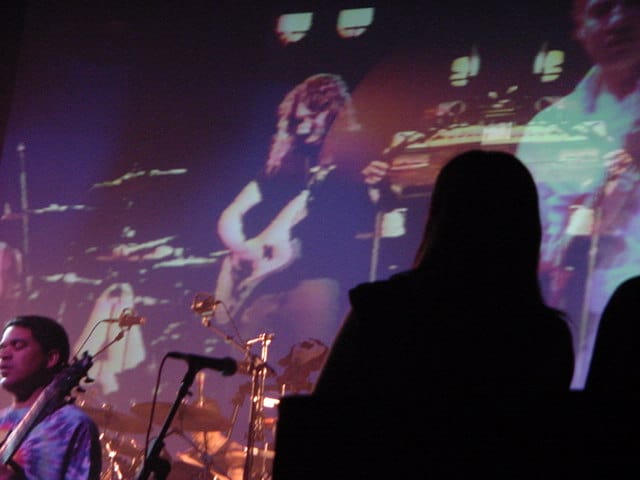 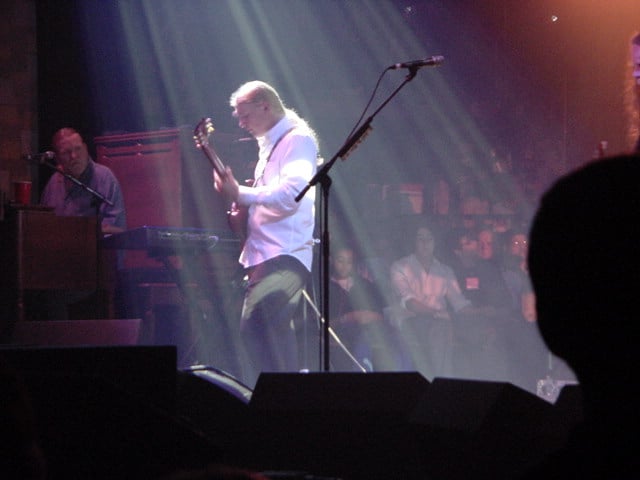 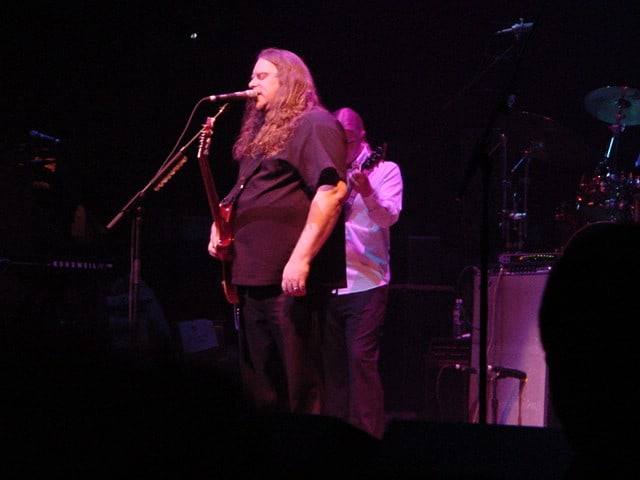 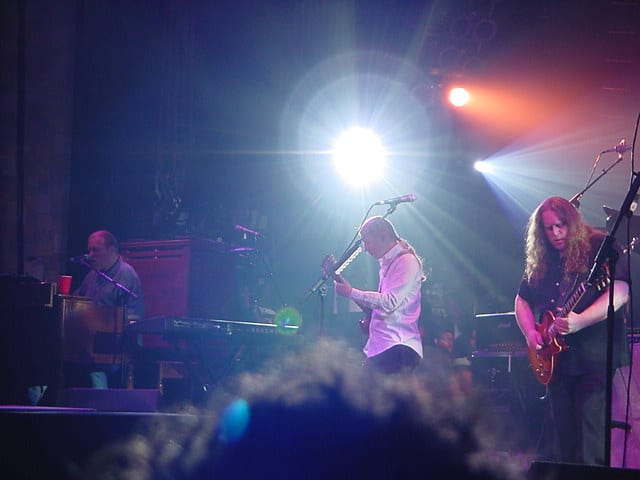 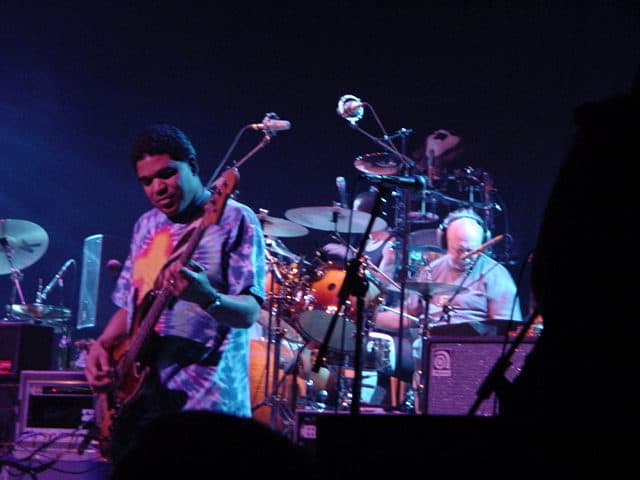 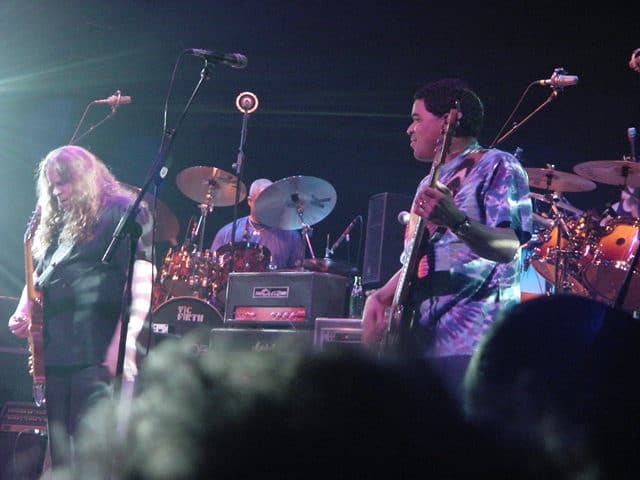 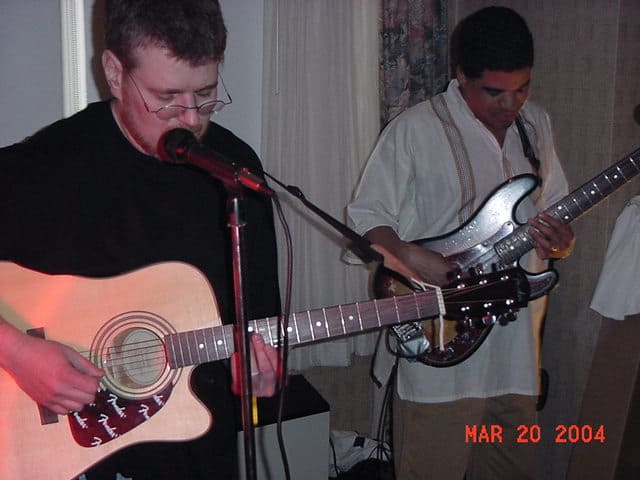 Tonight the band took a sharp left turn, deep into the vein that runs from the Mississippi delta up through Chicago– it was clearly blues night at the Beacon. In large part, this was driven by the presence on many numbers of Thom Doucette on harp. But you could probably find “Schoolgirl,” “One Way Out,” “Can’t Lose What You Never Had,” “Same Thing,” and “Key to the Highway” on a good Chess anthology. If John Hiatt hadn’t already copped the title, I might have called this review “Crossing Muddy Waters.”

“Don’t Want You No More” is an upbeat opening, with Derek taking a solo, then Warren peeling off a ringing solo. Warren leans on the transition note, and the first heavy blues of the night kicks in, “Not My Cross to Bear.” Warren plays some stinging blues lines; Derek follows with a full, round tone. Derek is as front and center in the mix this year as Warren, which was not always the case. Again Warren leans on the closing note, transitioning the band into a driving “Every Hungry Woman.” This is the first song repeated so far on the run, and it is night three.

Next up is another run at “The Night They Drove Old Dixie Down.” The harmonies are bright and spot-on, Warren and Marc joining Gregg on the na-na-nas. Oteil, who is not at the mic, is leaning back, eyes closed, smiling ear to ear, singing along. The song features a short, honey-drenched solo by Derek between verses, then a longer one, with a more molasses-like flavor..

Thom Doucette comes on, and before he is even set up, there is a clear affinity going on between Doucette and Oteil (he sets up next to Oteil on the far side.) The band rolls out the “Good Morning Little Schoolgirl” vamp, with Doucette blowing over the top. Warren sings, accepted by Doucette, who fits this song like a glove. Then Doucette takes the first solo as the band grinds on, reminiscent of the original, but also distinctly reminiscent of early Dead versions as the band adds some jam to the mix. Then Warren takes his solo, playing that “Spoonful” type lick he uses to launch. Later in the song Derek starts soloing, leading the band in a “brought down” jam, with Doucette in the background. Derek’s lines grow fuller and fuller; at first he’s hardly there, then he’s everywhere. The band falls in, the jam built on triplets (that waltz-type pattern that everyone calls a tease of “The Other One”), and then, like its time to flip the pancake, they’re back over into the “Schoolgirl” riff. As the song fades, Warren repeats “I go home witchoo” over and over, even after he’s too far from the mic to be heard, as Doucette dances over the riff. Highlight.

An Oteil funk riff leads into “Wasted Words.” Solid version, Doucette lending flavor. Oteil is on fire, clearly digging Doucette. He comes alive on “Statesboro Blues,” a song where his part is usually simple and basic, but he pushes against Doucette, stepping up from the basic bumpa-dumpa blues bassline, and the song shakes and shimmies.

Doucette leaves the stage, and Warren makes the loud Mule fans happy with “Rocking Horse.” Warren’s solo is intense; there is smoke coming from his Gibson by the time he is done. Derek, of course, goes just the other way, starting off with a sparse, jazzy flavor. Eventually his attack becomes complex, cascading lines, spurred on by vigorous Warren chording. Derek sounds like a glass machine gun. Back into the verse, then Warren has the band hang on that closing, slightly off-kilter note and they erupt into “No One Left to Run With.” The Bo Diddley beat invariably revs up the crowd, and it is a popular set-closer.

“Key to the Highway” opens the second set, and there is something about it that makes it one of the more joyful blues standards. Maybe its the message (“I’ve got the key to the highway” is a more optimistic scenario than “my baby left me”); maybe its the 8-bar structure. Gregg sings, then Doucette takes the first solo. Then Derek plays the blues, then Warren, using more notes, upping the ante. Then Warren sings (he’s doing the vocals Chris Robinson did Thursday), then a rollicking Derek solo, then Gregg sings. Doucette takes a solo. Then Derek solos, and soon Warren joins him, the pair of guitarists playing different, almost dissonant lead lines together, developing brief tension. Then, they become harmony lines, a release of the tension, and the song comes to a close. Highlight.

“Aint Wastin’ Time No More” features Derek’s signature glassy, ringing tone. This is a song where that tone fits like it was meant to be there (even though it was written before he was born). Warren complements Derek with a slide solo of his own. Then a high-energy “Black Hearted Woman.”

“The Same Thing” has been a highlight of the set since Warren returned to the band, in large part because it is a song where Oteil truly shines, bringing a new dimension to the tune. The band shreds on the song, then after running through it, Oteil takes off on a funk-based solo, fingers flying. Soon the drums join in, and Derek brings out the implied melody to Oteil’s solo by adding chords behind him. Then, suddenly, Oteil– still soloing like Amelia Earhart– nods to the guitarists as his solo comes around, and bam! The band is back on the riff, only now it is a funk riff, not the song, but the riff defined by Oteil’s solo. Warren and Derek are careening off each other like there is no driver. (Oteil is the driver, but he’s got maybe two wheels, tops, on the road.) This furious jam resolves back into the emphatic close of “Same Thing,” which was just around the corner from that funk jam all along. It is another, bluesy-funky highlight.

“Need Your Love So Bad” is another pure blues that tonight has a “Stormy Monday” vibe, especially as the guitar chords evoke the latter song. I don’t know the last time the band has played this– or any– Enlightened Rogues song live; its been quite a while. Derek fills the room on his artful solo; he is clearly drowning in his own tears. Another bluesy surprise, “Can’t Lose What You Never Had,” follows; this version is bigger, darker and less melodic than the band’s recorded version, relying on a heavy grinding riff.

Susan Tedeschi Trucks strolls demurely out, pushes her glasses to the top of her head, straps on a guitar, and does a miraculous transformation from soccer mom to Big Mama Thornton on “Don’t Think Twice,” which she sings as a blues. For all intents and purposes this song is a Susan/Derek duet, a call and response, as Derek lays down the melody on the intro, then Susan sings a commanding bluesy vocal. As she sings the line “We never did too much talkin’ anyway,” Susan steals a glance over at Derek; then again as it is time for his solo. Then Derek plays the sweetest solo over Susan’s strumming of the chords. Derek’s solo brings a grin to your face; it is pure love. Then back to Susan’s vocals. For one song, this small woman has stolen the room.

Next up is “Dreams.” Tonight is Warren’s turn to solo. He relies on the slide, playing a slow boil of a solo that goes deep inside. Then “Elizabeth Reed,” beginning with Derek lightly soloing over a Marc vibe. After the theme, Derek takes the first solo; then Gregg on organ, then Warren plays a solo comprised of big fat sticky notes. The song gives way to the drum solo, which was omitted Friday night; then Oteil comes out for the bass section. Oteil is joined by his brother Kofi on flute, and the two of them are essentially dueting. Kofi tosses the ball to Derek, who brings the band in to drive the song home. “One Way Out” is the encore, completing the bluesy circle of the night, Doucette back onstage to stretch out the groove. It is a long hot sweaty night.

Well obviously there is a bit of a mix-up here, Josh Chasin’s review was POSTED on 3-20, but it is for one of the earlier shows, not the 3-20 show. Anyway, I sit here in California and look at the setlist for 3-20 and I CRY (only made it once to the Beacon, for two nights in 2002). “Can’t Lose What You Never Had?” I’ve been privately hoping they would pull it out for YEARS!! For those not aware, it’s from a largely forgotten but great ABB record, 1975’s “Win, Lose or Draw”, and it’s a Muddy Waters tune. Saw ’em do it the year it came out, in L.A., a GREAT old blues number. “Key To The Highway?”. Man, they keep pulling out the greats from Clapton/Duane’s Layla record. I see they already did “Why Does Love Got To Be So Sad” one night as well; I saw them do “Layla” in Berkeley last year. “Don’t Think Twice” with Susan? Saw ’em do it twice last year, cool that she is back onstage with the boys, and she really adds to the show. May have to make it back to NY next year; I only pray another West coast swing will happen soon. Mr. Clapton: How ’bout sitting in at The Beacon for a night or two sometime????? -Rob