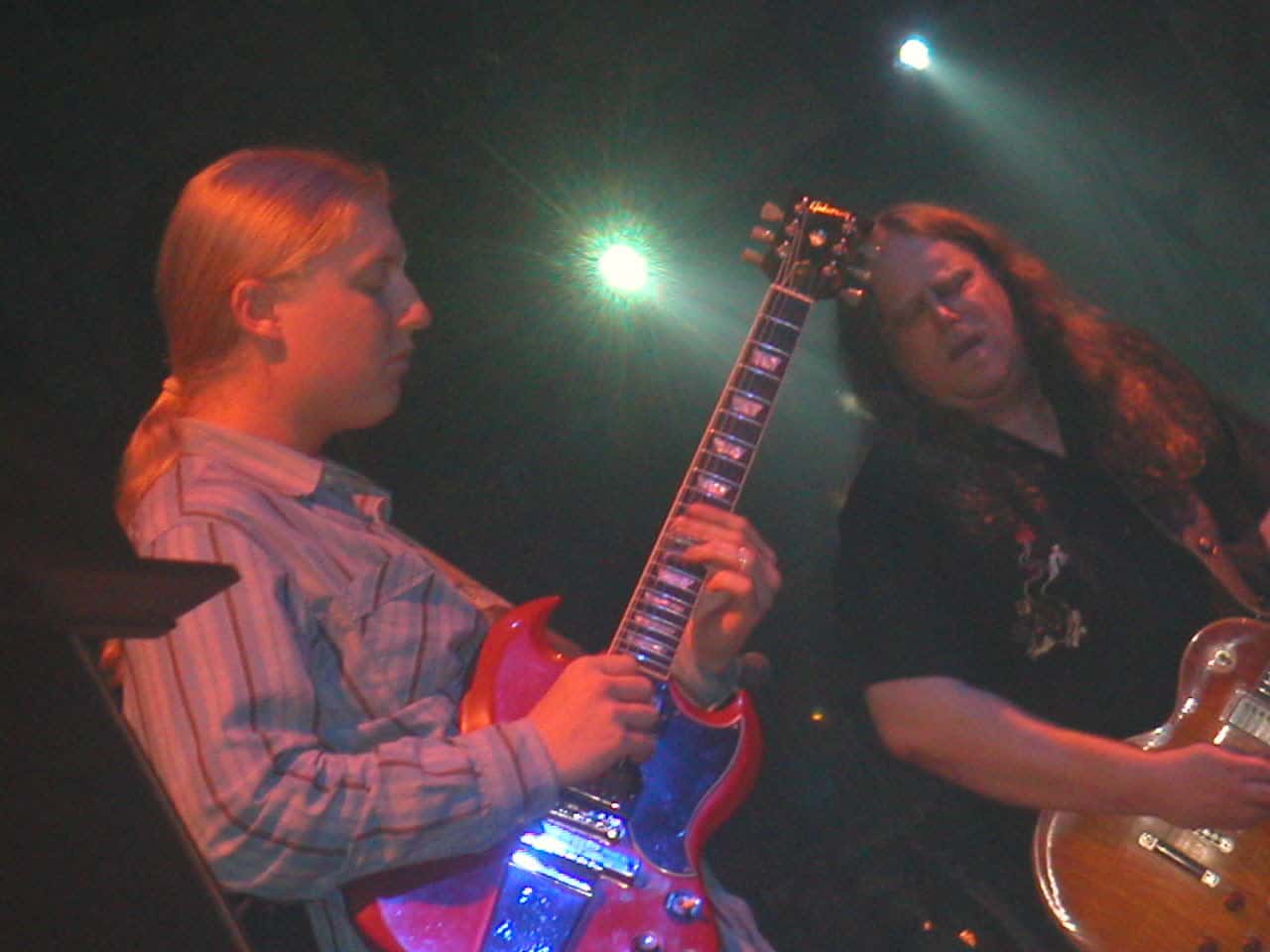 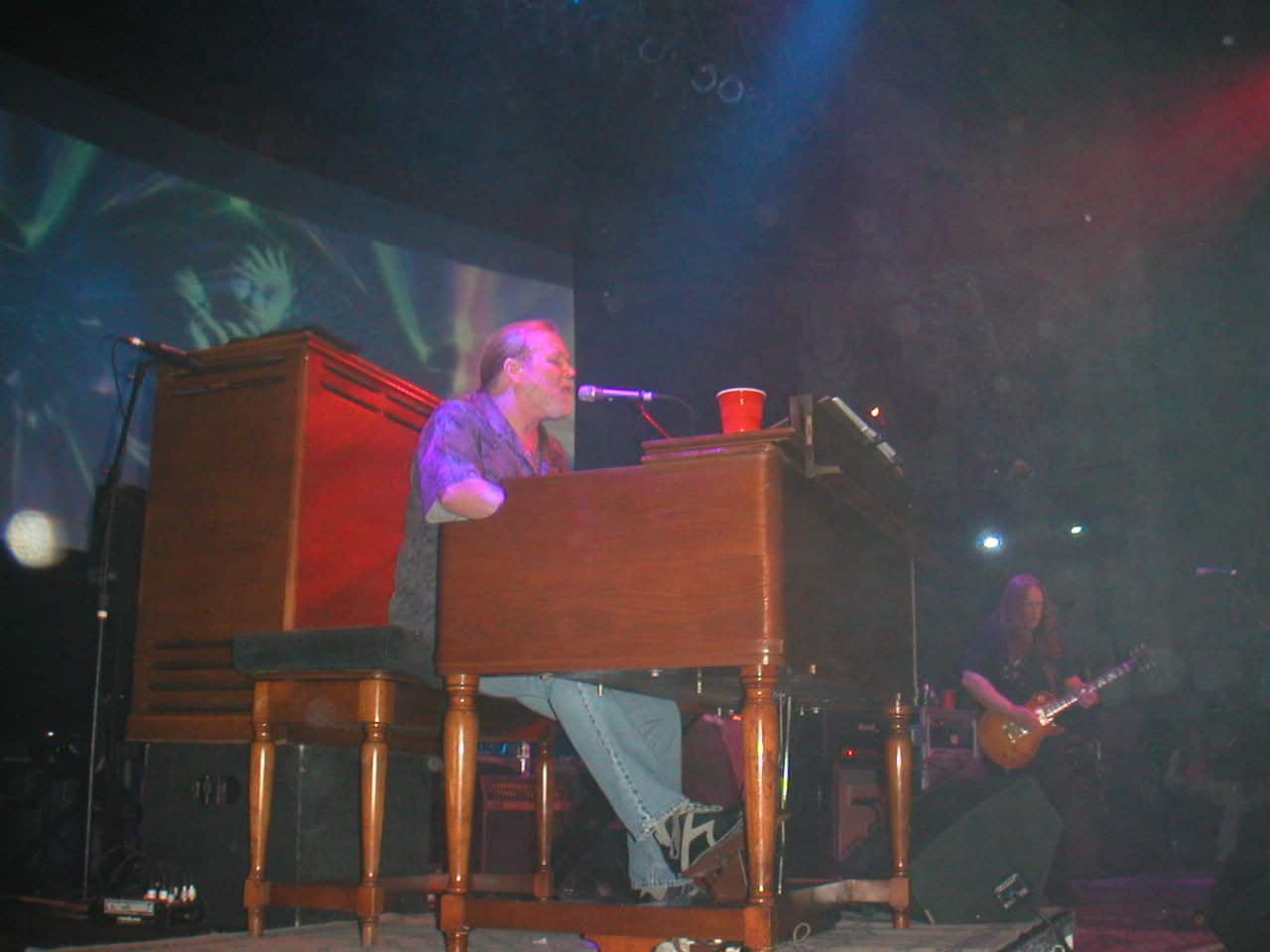 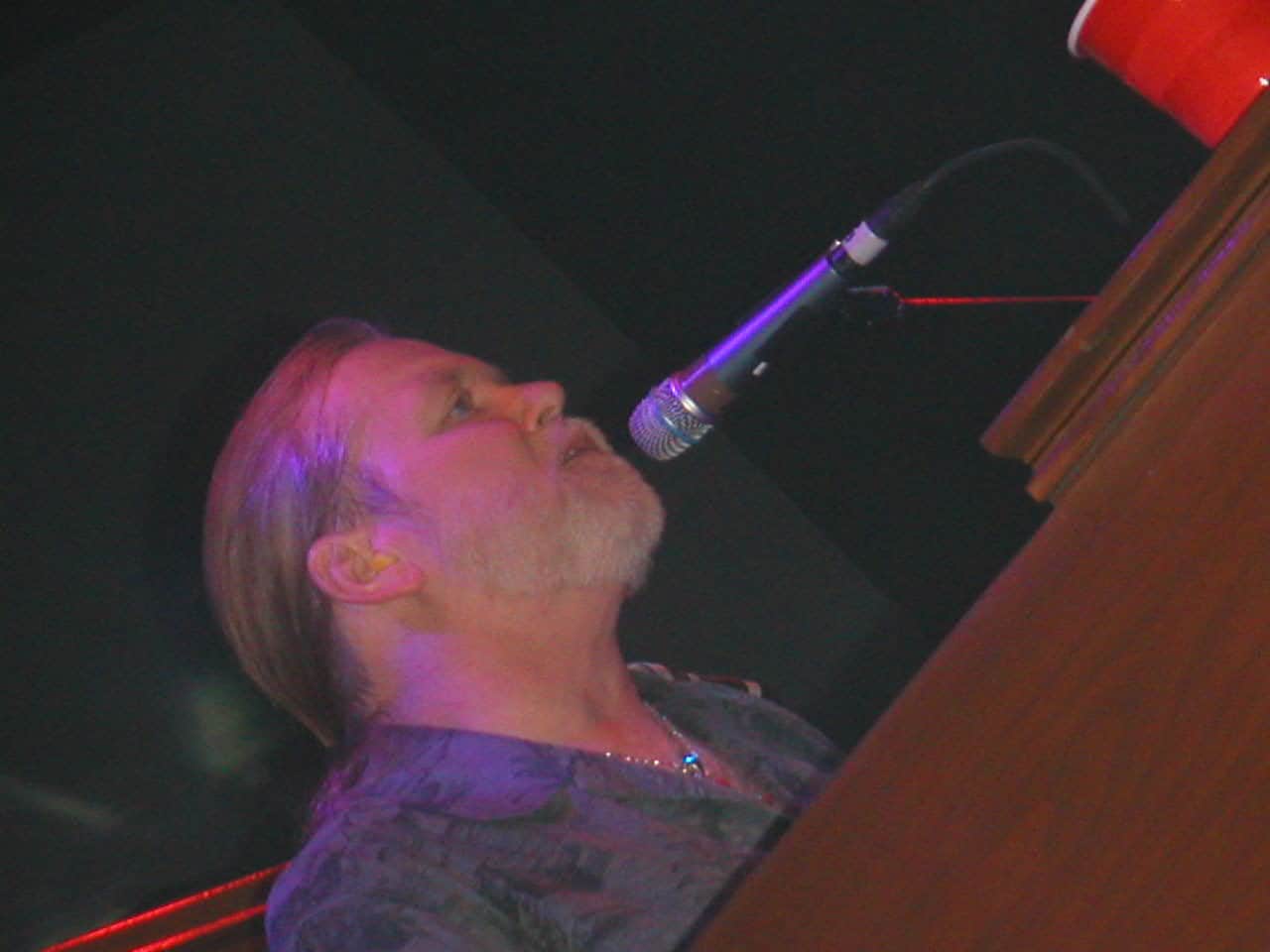 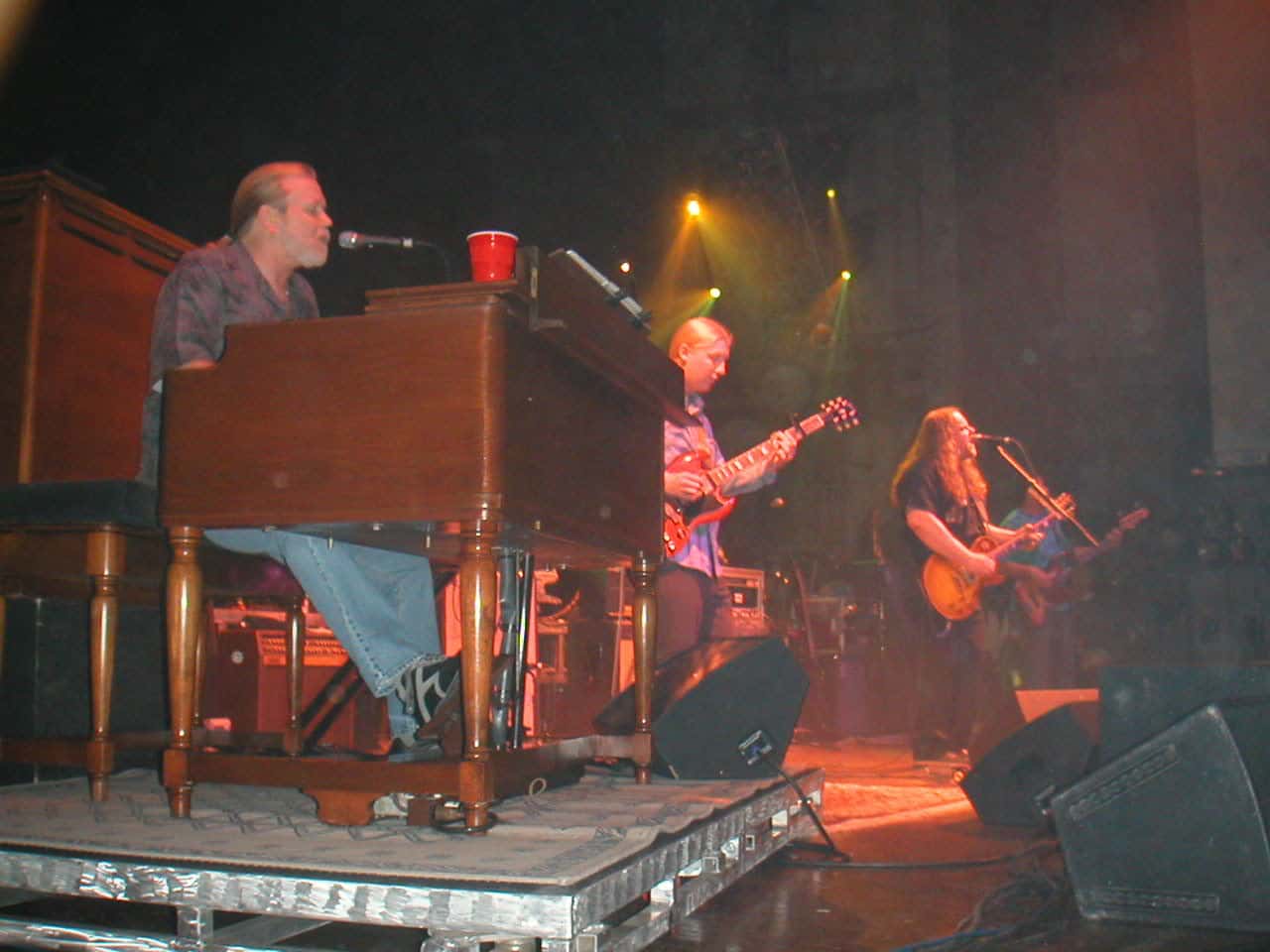 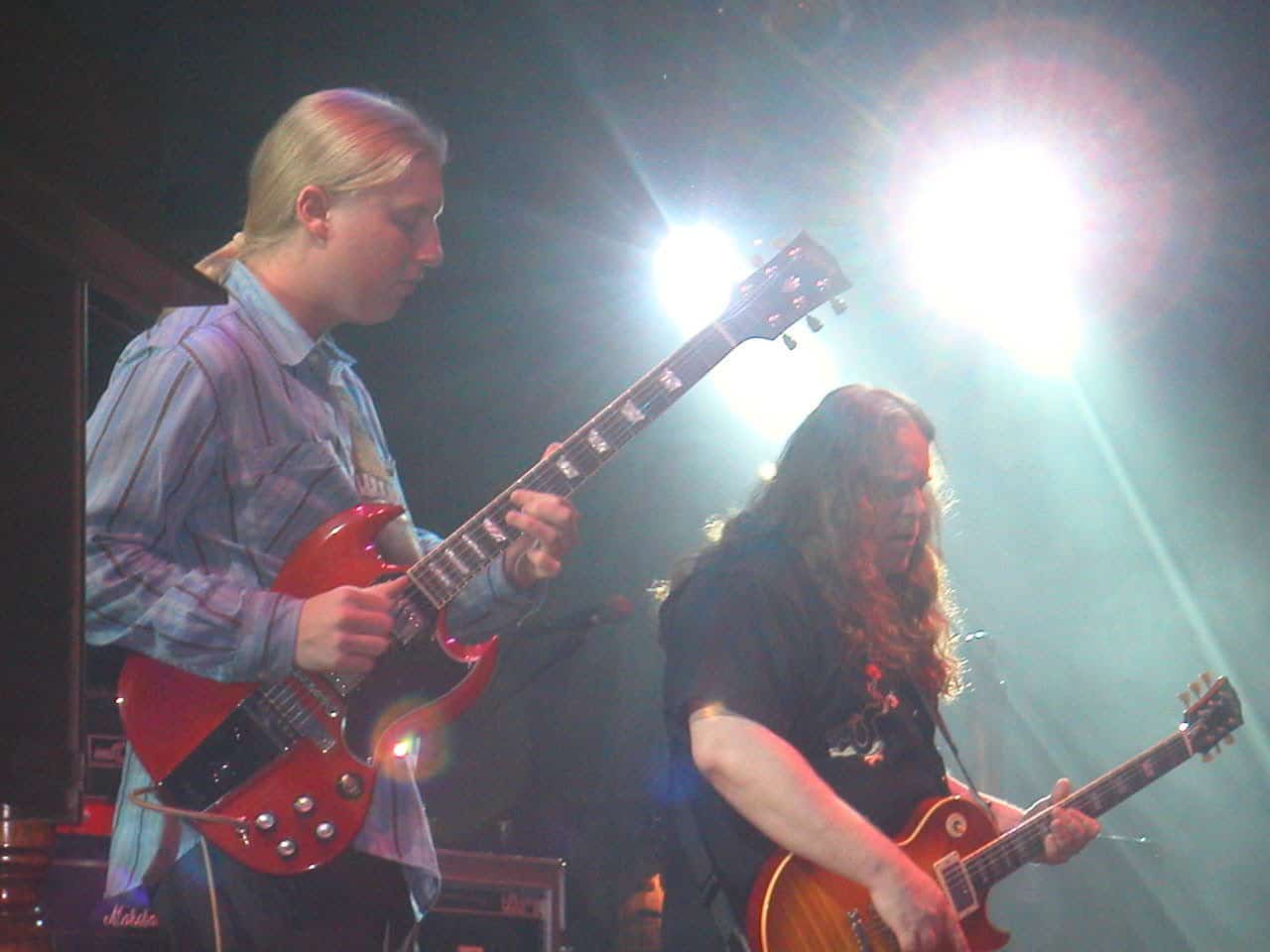 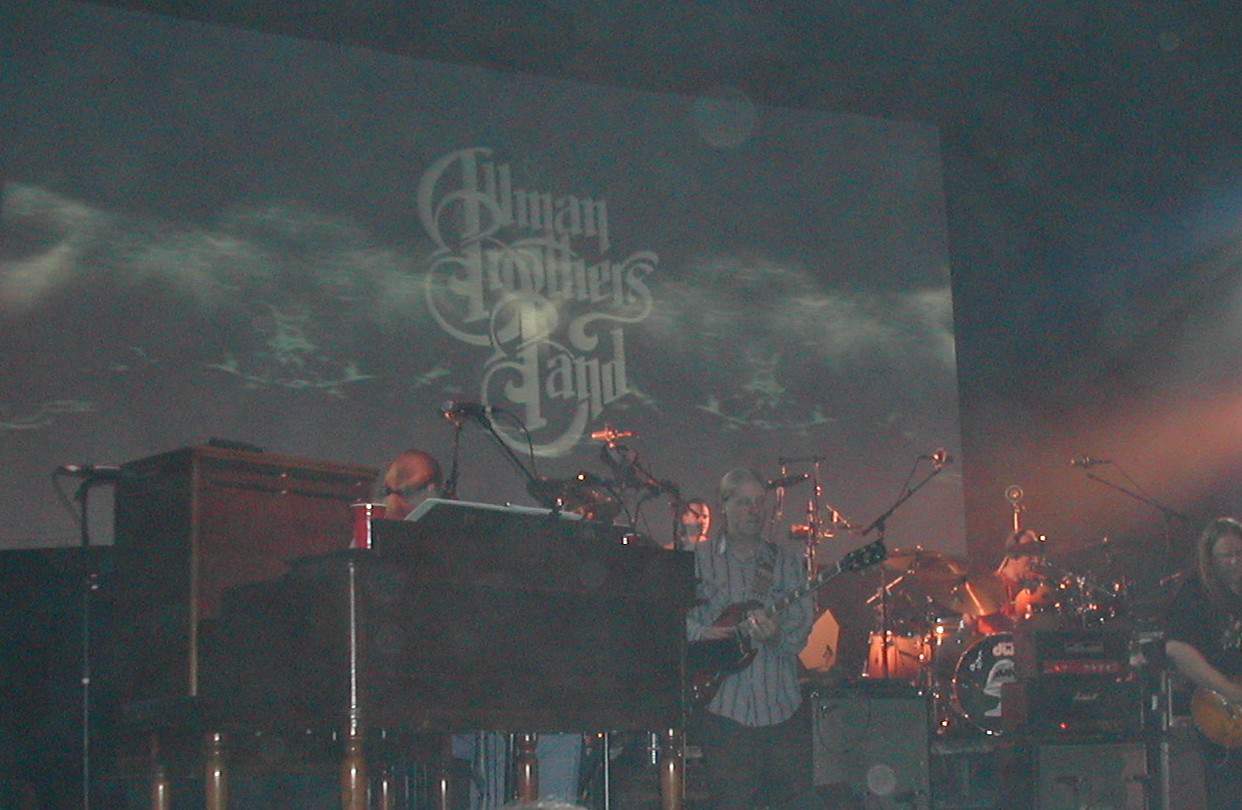 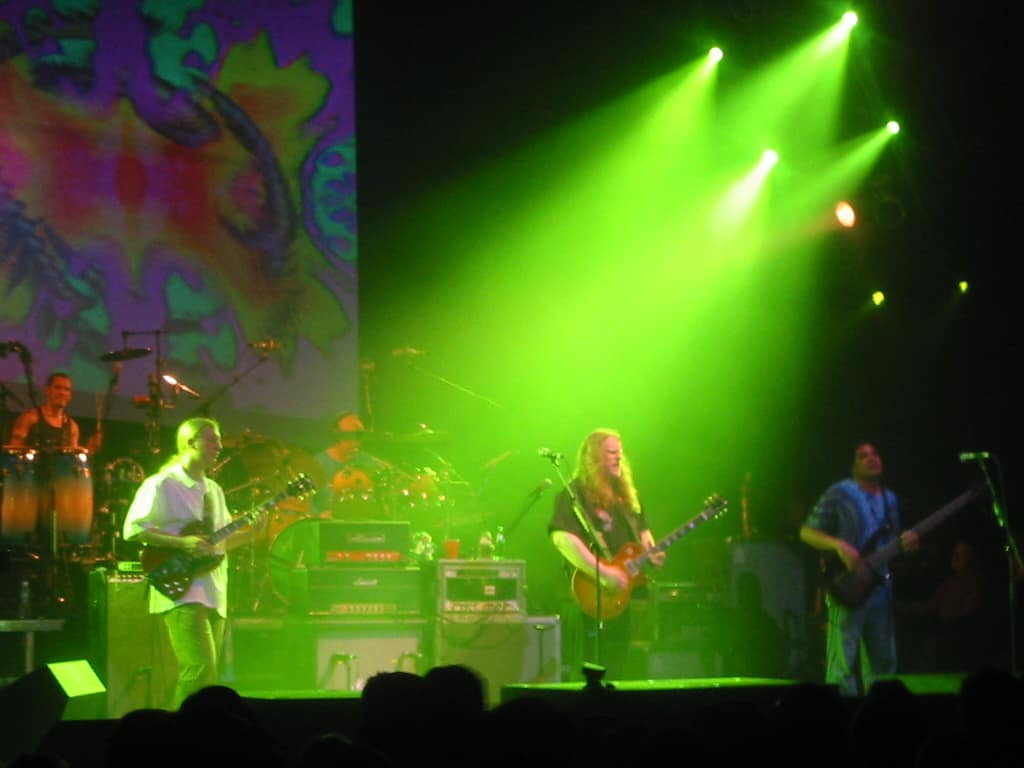 hello i have been to many an allman brothers show and boy this one might have to top them all..i know it’s a huge thing to say but i watched a good part of it through binoculars and it puts a whole new spin on the show. the faces on the players were so intense at times i felt very close to them. i can’t explain it better but i left the show with a huge smile on my face and i think i could have ran back home to staten island. it gave me a lot of energy. i would love to get to see another but i hope they make a cd of the show of 3/18/2004. it would be great if they did the same thing the dead and ratdog are doing. having available cd’s of the shows..great idea..peace to all

Thank you for that wonderful essay!! Makes me feel like I was there! Now for the tapes (or cd’s)!!! Can’t hardly wait to hear this show!!!

I fear the Allman Brothers may have committed a grave tactical error last night. See, opening night at the Beacon is like opening day for your favorite baseball team– full of freshness and hope. But is isn’t the play-offs, if you know what I mean. You expect the band to lay down a foundation, “establish the running game” so to speak (I know I’m mixing sports). Plant a stake in the ground. Then as the run wears on they get better and better.

They’re really not supposed to be this good opening night.

Overall, I’d have to say guitar-wise the night belonged to Derek– apparently by design, as he was the featured soloist in a majority of the songs.

The curtain went up, boom, and there they were, making tuning noises, very casually, out of which eventually sprang Derek’s unmistakable tone dancing around the pre-theme licks to “Mountain Jam,” Butch laying down the bottom. Derek tossed off long weavy lines, eventually joined by Warren as the two of them worked their way over to the song’s theme. Then Derek is soloing again, teasing against the melody of the song, then trading with Warren. Gregg announces his presence with a burst of organ fire, joining the two guitarists; then Gregg is soloing, and Derek ambles over to him, the better to compliment Gregg’s rich organ lines with those Derek flourishes.

The song– arranged, clearly, for a shorter version– comes to a full stop a little earlier than you’d expect for the drum solo, and the three drummers go at it. Marc is driving the drum jam from the high end. Soon the drummers, then band, lock into a solid driving groove that turns out to be the Dr. John song, “I Walk on Gilded Splinters.” The group harmony vocals are spot on (although from where I am standing– on the stage– it is hard to hear Gregg). Derek takes a solo, then back into the verse. Again Marc drives the locomotive as Derek and Warren engage in a brief slide duel.

It is, to say the least, one hell of an opening.

An upbeat “Trouble No More” is followed by “Midnight Rider,” a “just-so story” type of song that has the crowd singing along. Then the snaky riffage to “Forty-Four,” with Warren asserting himself on his first vocal of the evening. Derek drops lines over the fake outro– I’ll call it the mid-tro– as if he is totally oblivious to the concept of time; he is in no hurry, the song snakes along, Derek periodically unleashes a fat, ringing line. Blazing, yet laconic licks. I don’t know how he does it. Then the band picks up steam, Oteil driving them to a crescendo, and Warren is back into the verse. Again Derek solos over the bouncy riff on the real outro, which is shorter than the fake one. Another early highlight.

Oteil drives “Black Hearted Woman,” and especially the jam on the outro. “High Cost of Low Living” is up next, a vocal tour de force for Gregg. Warren plays some nice, round-toned solo licks around the verse. Then Derek fills the room with icy-cool soloing– his tone is remarkable all night– and makes his way over to Gregg as Gregg begins accompanying the solo on keyboard. Warren adds licks to Derek’s solo, and soon it evolves into a musical conversation between the two guitarists. The full band closes the tune with a sweet melodic touchdown.

Next Warren introduces Chris Robinson, and the band launches into “Key to the Highway” (Marc sits this one out). Gregg sings the first verses, then Warren plays a gloriously happy solo; then Chris sings, followed by a Derek solo, more moody and dark than Warren’s. Gregg sings, and then Derek and Gregg essentially duet on the break; the music gets gentle, and then Gregg solos alone. The Derek/Gregg chemistry is obvious tonight. Chris plays a harp solo, followed by another joyous burst from Warren, and the song comes to an end. It was as much fun as it sounds like it was.

Oteil lays down the bottom for “Instrumental Illness,” with Gregg’s opening organ solo just totally spot on. I have long believed that a hallmark of a great Allmans show is a strong instrumental presence by Gregg. Derek plays a sparse solo– less is more, doncha know– and then the band is back into the song structure part of the song. Then Warren steps up, his solo building in both volume and intensity as the band falls into step behind him. Again there is a false ending, but Oteil makes like Thor and pulls it back for one more round.

The second set opens with “Wasted Words.” Warren takes a piercing, driving solo, and Derek joins him for harmony lines. Next Warren leads the band into a soulful “Woman Across the River.” His solo is fierce and bluesy; Gregg’s organ solo is just totally in the pocket. Warren is back into the verses, with Gregg lending flourishes behind him; Derek takes the final solo.

“Old Before My Time” is up next; it is at core almost a folk song. Warren plays a major key, melodic solo that is a thing of sheer beauty; Derek’s shorter solo, comprised of brief lines, is more blues-based and expressive of pathos.

On “Every Hungry Woman” the band locks into a funk-injected groove powered by Oteil; the guitarists are flying through the song as one. “Aint Wastin’ Time No More,” and Derek and Gregg do their dance; it is a sweet ethereal version that takes you inward in an almost “Dreams”-like way.

Up until now the show has been rock solid– smartly paced, some great surprises, and tight playing. Here is where it leaps into the stratosphere.

First, Warren breaks out the mighty “Rocking Horse.” It is a thunderous, deep-second-set version. Coming out of the “Horse,” the band stretches the close, launching into a jaunty minor key jam, with Derek chording. And I know those chords. I have heard them before. I have heard them from Derek’s band. I have heard them from the Mule. Hell, I’ve heard them embedded in Mountain Jam last summer. So I am not surprised when Derek steps forward and states the musical theme to “Afro-Blue.” It is a magical moment. Soon Derek and Warren are trading off on variations of the theme– first taking solos, then just swapping scatter-shot licks. It is pure heaven. The Allmans are playing Afro-Blue. It is the perfect piece for this line-up. All three drummers are on top of the song, each playing in uniquely his own way, the three of them managing to weave a singular rhythmic tapestry. Remember, Coltrane didn’t write this one; Mongo Santamaria did, and it has a distinctly Latin feel to it– indeed, in the hands of this band it is not unlike “Elizabeth Reed.” All three drummers are shining.

Soon, Warren and Oteil begin to guide the song down, down into the drum solo, a driving and complex section taking off from the flavor of “Afro-Blue.” Out of the drums, there is no bass solo; instead of going back into “Afro Blue,” the band launches into the “march” part of the post-drums section of “Mountain Jam.” It is a mind-blowing curve ball. They are going to FINISH “Mountain Jam!” It is majestic, elegiac. Derek solos over a Butch-led foundation. Then, as the guitarists lock onto the harmony riff that is the core “Mountain Jam” theme, the place goes nuts.

The encore is “One Way Out.” A fine version. It doesn’t matter. At this point they could have played “In-a-Gadda-Da-Vida” and I wouldn’t have blinked.

After the show I tell Oteil, “You’re not supposed to be this good on opening night.” He beamed.