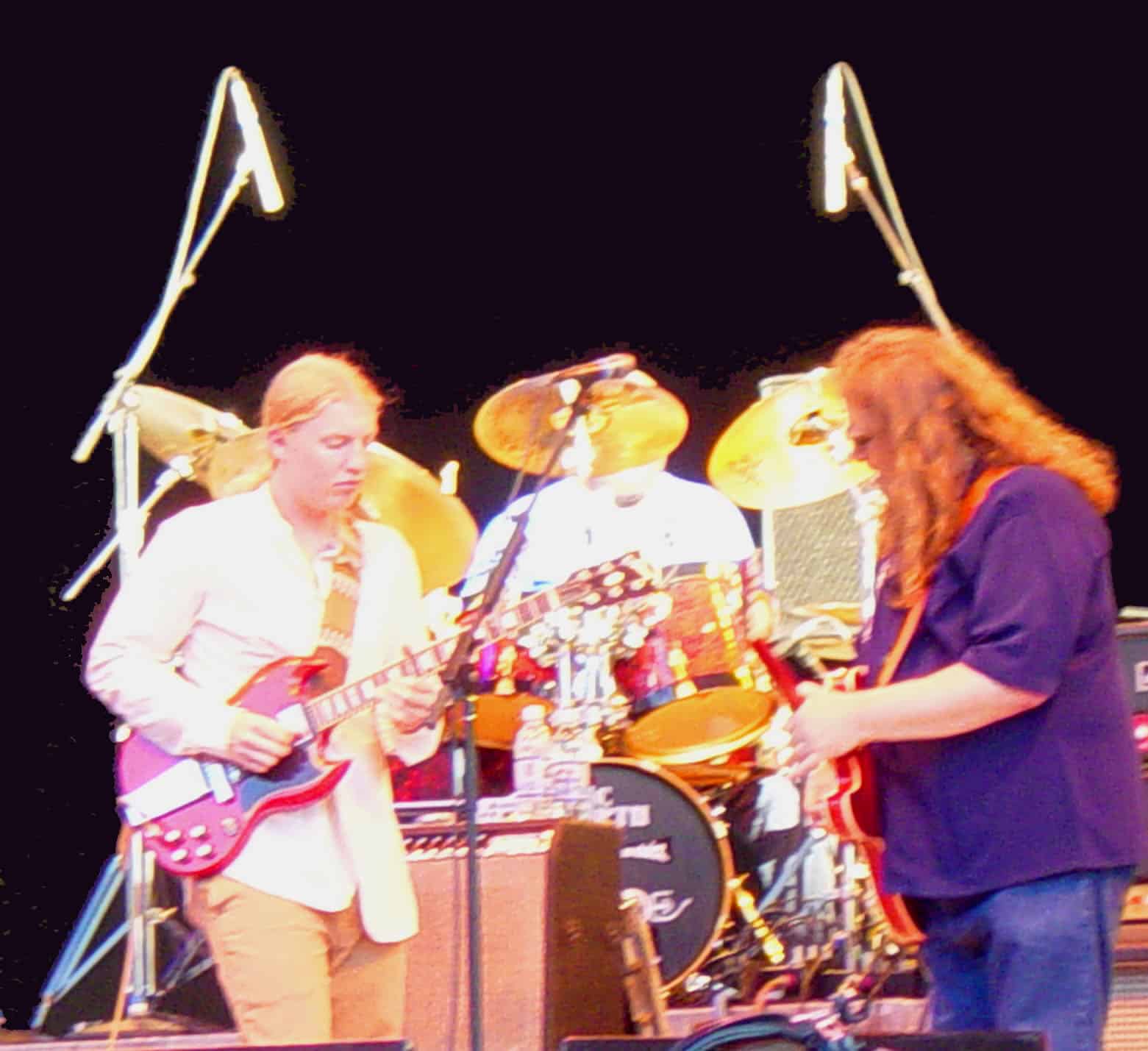 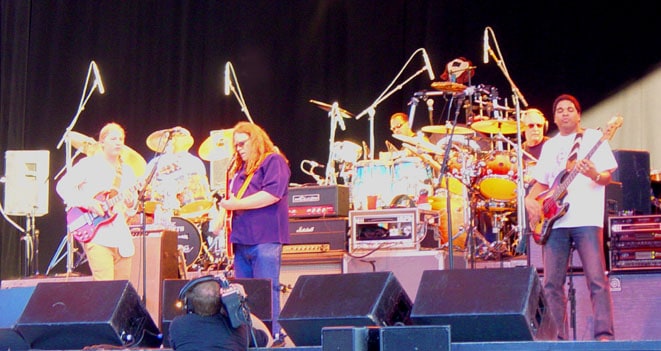 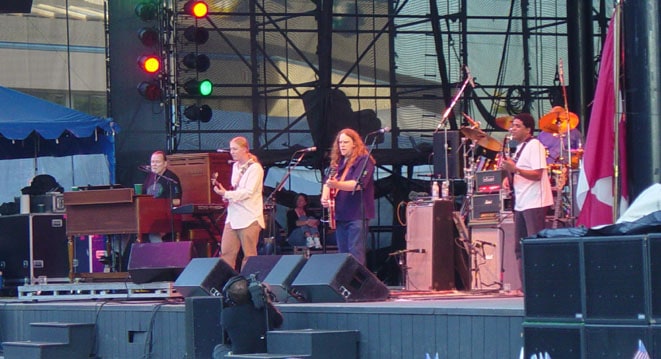 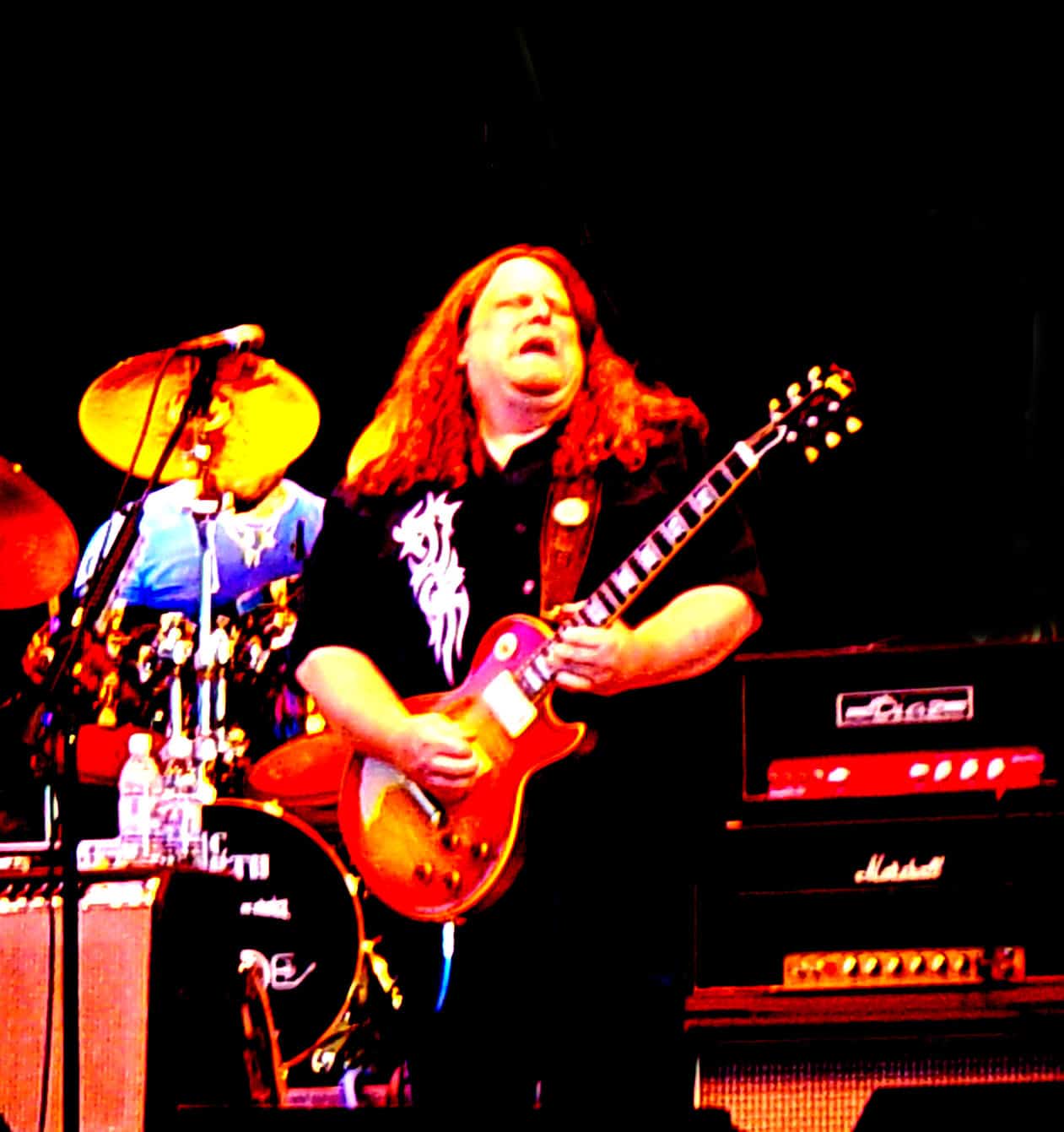 After waiting 4 years to see the band in Seattle (area) again, last time being a smokin show at the pier in 99,
I was looking forward to another great show, Like other postings, I too was a little disapointed in the length of the set, but after talking to some people I found out that the Puyallup Fair put a 6pm. music cerfew on the Band, They played right to the limit,
I thought the band was tight dispite some technical problems with sound system, It definantly would have been better at night with a light show, but hey this is the fair that is known for deep fried twinkies !! whadya expect ?

there was a low sorry turnout for this show, with The Dead playing same day? (who’s promoting these dates), I hope the band comes back here to a real theater, they sold out the pier, the winery, the paramount, the arena & filled the gorge,
the puyallup is a stinker of a venue,
that I’m sure contributed to the turnout or lack of,
All in all, it was great to see the boys again, & if I have to fly out to see a real Allman Brother show that’s what I’ll do,

& hey Puyallup fair did you really have to send 4 cops & 3 security guys to haul off that fifty something year old couple for sparking up a joint ?. I know with the terrorist alert & everything, but I don’t think they were threatening the safety of the homeland,

goin’ out west. at last. it’s been 4 long years since the ABB last came to the pacific northwest…. aug ’99 in seattle, to be more precise.

after gracing my hometown (vancouver) with their presence 4 times between ’91 and ’97, i’ve now been forced to hit the road to get a taste of my heroes. after an aborted attempt at a ’98 beacon run, made the short 3 hour trek south to seattle in aug ’99 and was not disappointed as the dickey/derek line-up gave us a spectacular show. after hearing many shows from the year’s tour and reading some great reviews, i had high expectations for the closing date of this tour for a once-again-revitalized-ABB.

the venue, puyallup county fair, was a seemingly odd choice (a reasonable distance southeast of seattle). the place was half full at best with most of the floor seats occupied, buy maybe 1/3 of the grandstand. walking past the stage on the way to our seats it was cool to see butch and jaimoe putting the finishing touches to their drum set up. show time was set for 4pm and there was no opening act. with the stage facing west, we got no brotherhood of light show, just good old sunshine.

pretty much on time, the boys took the stage (gregg and butchie with shades, appropriately)…

while i didn’t note the setlist while there, here’s what i can recall (not sure about the order)

trouble no more
ain’t wastin’ time no more
black hearted woman
worried down with the blues
high cost of low living
firing line
woman across the river
no one to run with
statesboro blues
midnight rider
good morning little schoolgirl
instrumental illness
revival
one way out.

won’t bother with a blow by blow, but some overall comments:

gregg looked and sounded great. and at the end of a long tour. how about that. though when he commented "the night was young" i had to chuckle (since it was still afternoon, i suppose he was right). for the large portion of the show, warren was much louder than derek in the mix – that was unfortunate. the new songs seemed mostly well received though it seemed many were not familiar with them. another funny aside was warren trying to contain some feedback while he wrestled with his sunglasses. instrumental illness was fantastic with volunteered slavery quotes from derek. i’ve never been a big fan of the drum solo break in the this tune, but this one really cooked. oteil’s brief, scatless solo was also a treat. when the band left the stage a little under 2 hours after beginning, i figured there must be plenty more in store for the encore given this was the last night of the tour. however, what followed was a pedestrain one way out and that was it. the shortest ABB show in my experience, clocking in at just over 2 hours. it was a strong show, but driving the 3 hours home, i did feel a little short changed. and while i guess quality should win out over quantity, with the ABB we usually get both.

anyway, i can only assume that warren and derek (the hardest working men in show business) wanted to get down the road to the gorge to jam with the dead whose show started at 7pm. that must’ve been something…

Beautiful sunny afternoon in the great Northwest. The boys all had to don sunglasses as the stage was flooded with sunlight early on. I was a bit dissappointed at the turnout for one of my alltime favorite bands. I was glad to hear the new songs, and they really cooked on all of them. Would have really liked to hear Desdemona, but hey…can’t have everything. It’s been a while since I’ve seen this band, and I must say that they don’t seem very crowd friendly. Gregg rarely even looked at the audience, much less conversed with them. Derek was unbelievable, but also seemed workmanlike going through the setlist. This could have almost been billed as the Warren and Derek show, as other than sing, you would not even have known Gregg was there. Don’t get me wrong, the setlist was good, and two better guitar players you could not ask for. But considering this was their last show, I was hoping for more than a 2 hour set. They One Way Out as the encore…adding Whippin’ Post would have sealed the deal. All in all…a good show…these guys have a great line up, and I think a little more interaction with their audience would go a long way towards enhancing the show. This is too good a band to play to 2000 people at a fair.