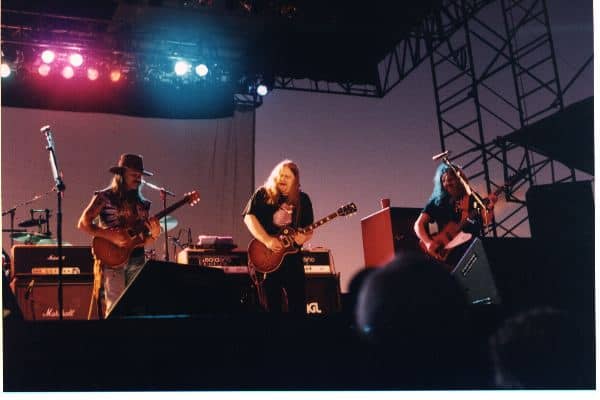 1) maybe the band was on fire that night because Gregg’s mom, Geraldine Allman, was in the audience

2) the Whipping Post included a “Norwegian Wood” jam, among others

I wish I could remember the name of this festvial, there were several bands but I remember most the Chris Duarte Group, the Stephen Stills Blues Band, and of course the show headliners, the Allman Brothers Band.

Chris Duarte was good but Stephen Stills Blues Band was terrific, especially the encore dedicated to his Florida neighbors, “Treetop Flyer”. The Allmans came on right around sunset and I couldnt believe how open the field was, so much that we walked right up the front & center of the stage and it felt like the show was just for us! I hadnt seen the Brothers since Cincinnati 1991 but things hadnt changed and they kicked my ass all over that field.

They let this blond kid up on stage to sit in on Statesboro Blues. He seemed out of place next to these grissled guitar warriors especially when the guitar seemed bigger than he was. I’d never heard of Derek Trucks before and although he was only about 15, he tore it up, keeping up note for note w/ Dickie & Warren. Blue Sky was an extended treat and it was great to hear the Brother’s version of “the Same Thing” after catching the Dead’s version the past few years. Duane Betts sat in on this one I remember thinking how cool it must be to let your kids trade licks with you on stage.

Another reviewer mentioned the Soulshine, and although I didnt bust into tears, I will admit it was beautiful. Jessica & No One Left to Run with came later and it seemed like those 2 tunes lasted over an hour before they even got to You Dont Love Me. This was a cool version w/ Warren taking the lead vocals before landing into Back Where it All Begins. I remember having a *****-eating grin on my face and amazed that the last show of the tour could contain so much raw energy. I actually thought this was the last tune so I was even more blown away when they played Elizabeth Reed. This song always guarantees and the interplay before Drumz and leading into the Bass Jam segued so naturally into a 3rd Stone from the Sun jam, that Jimi Hendrix had to be smiling from above. It was so brilliant that I couldnt imagine they could top it, and once again assumed that it had to be the encore.

It was around this time that I noticed all my friends had disappeared in exhaustion and I was standing like a pillar 10 feet in front of the hottest band on Planet Earth when the band kicked into a Southbound. This was nothing less than amazing and someone named “Chris Anderson” joined in. Even after this the Allmans were not going anywhere. Dickie Betts introduces Warren Haynes as one of the finest players in the world and then leads into a blistering One Way Out. I was literally waiting for fireworks to burst out of the stage, it was just one of those nights that you remember being something so special you might someday doubt you were really there.

I was standing front and center, maybe 10 feet back, tons of room, beautiful night, warm breeze, it was perfect. They left the stage and had to be finished for the night, unless you are up for one more….what about Whipping Post? Yep, what a night.

My memory is fuzzy on the dates, it was either at this show or one of few weeks later at the Sarasota Blues Festival where we caught Greg Allman play w/ Derek Trucks. We were walking into the lot after the show and almost walked right into someone revving up a motorcycle, loud and fat, back and forth. This guy with a long blonde ponytail, leather vest, & a blue beanie-sized helmet was on a long neck Harley. He was leaned back like he was chillin’ on an easy boy raging the hog’s engine. I was convinced that Greg Allman was the baddest MoFo on the face of the planet…and I was right!

This was the last show of the tour that included Woodstock, and they were at their absolute peak. I believe this was the best brothers ever with Dickie, since the days of Duane! Stephen Stills played first (Treetop Flyer), and the Brothers came on with a spectacular sunset. But one of the best songs is missing from the setlist – a 20 min Southbound with triple dueling guitars that included a friend I went to school with in Sarasota – Chris Anderson. I have the Woodstock set on SVHS, etc, and Chris’s great first album, but I would really like to get this version of Southbound if possible, and there were some Killer shroom covered shorts from the tour! that I can’t find at Kid Glove, and have never seen again.

What a fabulous show this was! I remember standing against the stage wall crying my eyes

out during Soulshine. Thank God for the road that goes on forever! Peach always! Beth