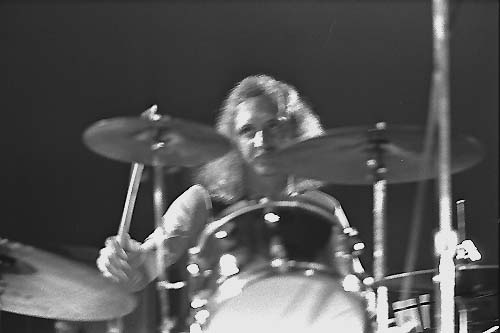 At the January 25, 1972, concert at the Atlanta Municipal Auditorium, the Brothers left a mic stand in front of Duane’s empty spot on the stage and the hometown Atlanta crowd was awash with cathartic emotion. All the hard core fans from Piedmont Park were in attendance, lending their support.

The Brothers did not return to Atlanta for seven long months, however. During that time the success of Eat a Peach propelled them to the top. They became one of the top rock and roll bands in the world, later to headline before 600,000 people at Watkins Glen. Unfortunately, the dynamic surrounding the Allman Brothers Band and their hometown of Atlanta was forever changed.

The August shows sold out quickly – but it wasn’t the Piedmont Park faithful who bought the tickets. Instead it was a legion of new fans that had never seen the band before. These fans only knew the Brothers from their albums and expected them to sound the way they did on the record. They had no sense of the history of the band and most of them didn’t even know who Duane Allman was, much less how his death had changed the band. The hippies from the Park were slack, as usual, and waited too long to get tickets – they were left outside the Auditorium.

Up until that time, the Piedmont Park hippy brethren had been in the forefront of the Brothers’ fan base. I would see the same happy, ecstatic faces time after time. These are the folks that grieved along with the band at that heart-wrenching January show.

I had planned ahead and had tickets to my usual fifth row seats, and I was really, REALLY ready to see the Allman Brothers Band after a seven-month absence. A good buddy of mine was in the import business, and he approached me with an idea. He had enjoyed the band so much and was so happy to see them return, he wanted to give them a pound of primo Jamaican Cali tops. I knew the promoter, so we went over to his place and made a proposition. He got back to us a few days later and told us that, while not all the band members smoked pot, they would be thrilled with the gift. So my friend and I went through his stash and handpicked a full pound of juicy, golden, foot-and-half-long Jamaican buds for the Brothers – both of us salivating as the fragrant perfume filled the room.

We dropped off our offering with the promoter (to this day I wonder how much of it made it to the band) and then prepared to take care of our own needs. Having already gone over the top, we decided to do it again. So we got yet another pound of handpicked buds and invited some friends over for a rolling party. We were up the entire night before the show rolling reefers and ended up with a whole grocery sack full of joints – musta been four or five hundred of ‘em.

Imagine the wonderful feeling we shared, headed to our long-awaited Brothers’ concert carrying a sack full of treasure! Our plan was to toss handfuls into the crowd in celebration of the show. Imagine our surprise when we got to the show and there were strangers all around …

During the break after the opening act, my buddy and I left our grocery sack with a trusted friend seated with us and headed to the backstage door – part of the deal was getting access to our heroes to ask them how they enjoyed the Jamaican delight. We were ushered backstage by the promoter himself and were introduced to Red Dog and Brother B.O. I had been thinking about this moment for days, yet I still didn’t know what to say. Do I mention my grief at losing Duane less than a year before? Do I relate how proud I am of the guys for carrying on the music? Do I tell them how I’ve followed them from the beginning? How do I go about bringing up the buds we’d picked out for them?

This was my first-ever visit backstage at any show, and I’m talking to larger-than-life figures – I’ll say I was tongue-tied! Fortunately, Red Dog and B.O. were kind and compassionate to our plight. They were friendly, gracious, and seemed genuinely glad to meet us. They made sure we knew that our gift was appreciated. I spent those few minutes in a dream, and then it was time for the music to start and we headed back to our seats.

The Brothers came out just tearing it up – B.O. was absolutely on fire. It seemed like they were as happy to return to Atlanta as we were to have them back. How must it have felt to them to be back in the familiar confines of the 5,000 seat Atlanta Municipal Auditorium after that long absence! I was filled with joy to see these guys playing again.

At the beginning of their set the band was playing their hearts out for the Atlanta crowd … but they received only polite applause. The more they played, the more evident it became that the crowd wasn’t the normal Atlanta audience. My friends and I in the fifth row were the only folks dancing, and people were shouting at us to sit down!

Every time I threw a handful of joints into the crowd it would set off a scramble, but then the energy would die right back down again. I was tossing them as far as I could, all around the floor of the Auditorium and I got to be pretty popular. After awhile folks quit yelling for us to sit down, at least – I guess they got too stoned …

It was so strange, so strange … I felt spooky. How could these people not recognize the greatness of the music in front of us! Sure, it wasn’t exactly the same as Fillmore East, but this is the ALLMAN BROTHERS BAND!

By the end of the show all the energy had been sapped from the band – the lack of a familiar audience had turned the show into an awful parody of a typical Atlanta Allman Brothers concert. They ended with a SEVEN minute Whipping Post, left the stage, and then returned for an obligatory encore. I can only imagine the conversations that took place during the short break, as their anticipated joyful homecoming had turned into farce.

Somebody – I bet it was Brother B.O. – had a sense of humor, because they broke into Hot’lanta. The song had been played for the first time ever on this very same stage in January 1970, but it had never before been played like this. To show the audience what they thought of them, the Brothers slowed the song down to half-speed. They played it dolefully, like a dirge – they were telling us they thought the crowd had been dead that night. And a few weeks later, Brother Berry Oakley was gone.

I agree that the Brothers had a “grinding” sound after Duane died. They had trouble getting “off the ground”. But I must disagree with the Watkins Glenn performance. Dickey really stepped up that night, and they soared. Southbound was awso

Interesting comments about this show — as fine as the musicians are, the void left by Duane Allman’s passing really couldn’t have helped but be the primary thing people noticed in the late 1971-72 shows. I know that when I listen to tapes