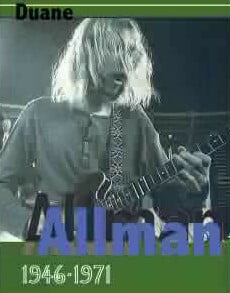 The best I can remember, Ten Years After, Canned Heat and It’s a Beautiful Day were some of the acts on the bill. It was hot as hell all day until a thunderstorm ran all the fans off except for about 200, a very lucky 200.

The storm let up and the boys took the stage. When they went into the opening song, Duane stopped it after a few chords. The storm had done something that cut the power of the sound system to less than half. You couldn’t hear *****!

Most of the band stood there with their mouths open when they saw Duane run down the steps and over to a dug-out. I thought, “well, that’s it. Show over.”

Then Duane ran across the infield, up the steps and to his mic. “The sound sucks and ya’ll can’t hear. Hell, WE can’t hear either. So, if ya’ll are real careful and don’t ***** up the grass, they said you could come down here, by the stage, and we’ll try to give ya what ya paid for.”

Man, that’s all he had to say. It was an hour and a half of pure gold, low volume and all.

Dig out you Dreams Box Set book, or something else with pics of the band with the rim and lights of Atlanta Stadium behind them. You’ll see that fans were right up at and on the stage. I can even recognize some of the people I went to the show with in those photos. Wish I had a tape of that one.

A few days later, they played the North Ga. Fairgrounds in Marietta, Ga. Read my commenys on that one, too.