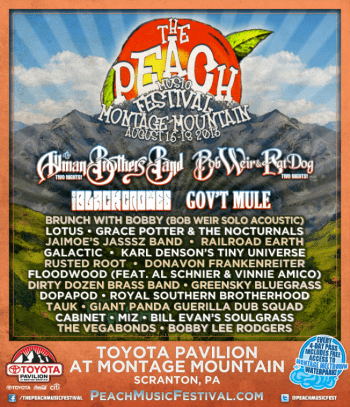 Tickets Go On Sale This Friday, February 22 at 10am!
Tix & info at ThePeachMusicFestival.com

Scranton, PA (February 19, 2013) – The Allman Brothers Band (ABB) is proud to announce The Peach Music Festival is returning for a second year to Toyota Pavilion at Montage Mountain and Sno Mountain Ski Area & Water Park in Scranton, PA. This year, The Peach will take place Thursday, August 15 to Sunday, August 18 and include 4 days of camping, multiple stages, music and so much more! The first-ever ABB-inspired festival in the Northeast Pennsylvania region – which debuted in August 2012 with over 30,000 fans in attendance – returns with an amazing line-up including: The Allman Brothers Band (performing 2 nights), Bob Weir & RatDog (performing 2 nights), The Black Crowes, Grace Potter and The Nocturnals, Jaimoe’s Jasssz Band and many more to be announced soon!

The Allman Brothers Band – GREGG ALLMAN (vocals and keyboards), BUTCH TRUCKS (drums and tympani), JAIMOE (drums), WARREN HAYNES (vocals, lead and slide guitar), DEREK TRUCKS (slide and lead guitar), OTEIL BURBRIDGE (bass) and MARC QUINONES (congas and percussion) — will be headlining the Peach Stage on Friday and Saturday nights, preceded by Bob Weir & RatDog. On Sunday, the Peach Stage kicks off with a stripped down set – Brunch with Bobby – a solo acoustic performance by Bob Weir. Closing out The Peach on Sunday is The Black Crowes.

In addition to ABB, fans will get a taste of Grace Potter and The Nocturnals, Jaimoe’s Jasssz Band, Railroad Earth, Galactic, Rusted Root, Dirty Dozen Brass Band and more bands that will be announced in the coming weeks.

“The first Peach Festival was as great of a success as we could have asked for,” said The Allman Brothers Band. “The overwhelming response from both the audience and artists to continue has exceeded our expectations. We are very excited that Bob Weir & RatDog have decided to join us this year in Scranton along with many other talented musicians. Year two will be even better than the inaugural Peach Music Festival, we cannot wait to play Scranton again.”

“We couldn’t wait to bring back The Peach for a second year to the loyal fans from all over the country,” said Geoff Gordon, Regional President of Live Nation Philadelphia. “In partnership with our friends, the legendary Allman Brothers Band, we’ve put together a festival that is a truly amazing outdoor summer concert experience: great music over multiple stages and camping in the mountains with some of the greatest fans in the world. If you didn’t come out last year, we hope to see you this summer at The Peach.”