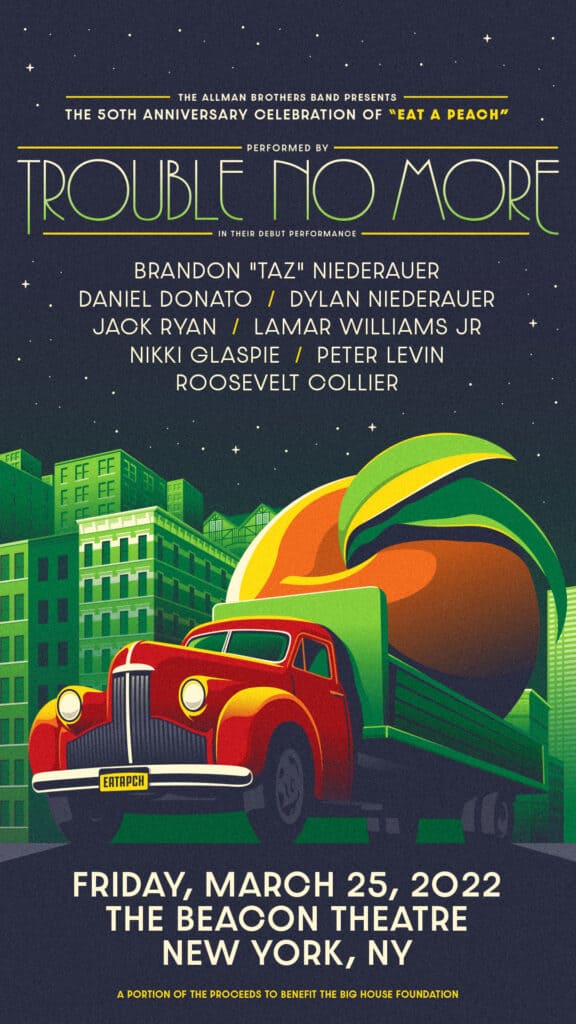 The music of the ALLMAN BROTHERS BAND will be celebrated with the Friday, March 25 debut of the new band TROUBLE NO MORE at NYC’s Beacon Theatre, a venue the esteemed ABB played nearly 250 times. They will be honoring the 50th anniversary of the Eat A Peach record which was released February 12, 1972, and has been distinguished as one of the greatest albums of all time.

Pre-sales for the show start today, and tickets go on sale Friday, January 7 at 10:00AM EST.

A portion of the proceeds to benefit the Big House Foundation in Macon, GA.

The primary mission of the Big House Foundation is to preserve and promote the rich musical heritage and inclusive diverse culture of the Allman Brothers Band through programs revolving around education and exhibition. Founded in 1969, the Allman Brothers Band created a new genre of American music, which was an amalgamation of blues, R&B, country and jazz unlike anything heard before – or since. The band was not only a groundbreaking force in music, however; they also were, in their own way, a component of the Civil Rights Movement in the Deep South of the late-60s. Composed of five white hippies and one African American, the Allman Brothers Band made quite a social impact in their home base of Macon GA. Music is color blind, and the members of the group did not see skin color; they only cared what was being played, not who was playing it. Combined with their family-based lifestyle at the “Big House,” the band’s communal hub in Macon (and the current home of the Allman Brothers Band Museum), the Allman Brothers Band spread a message of peace, love and acceptance. That message is the core of the Big House Foundation’s objectives; music programs for schools that are sorely lacking in funding for the arts have been created, and workshops and lectures on civil rights and equality through music have been presented to students of all ages throughout the world.