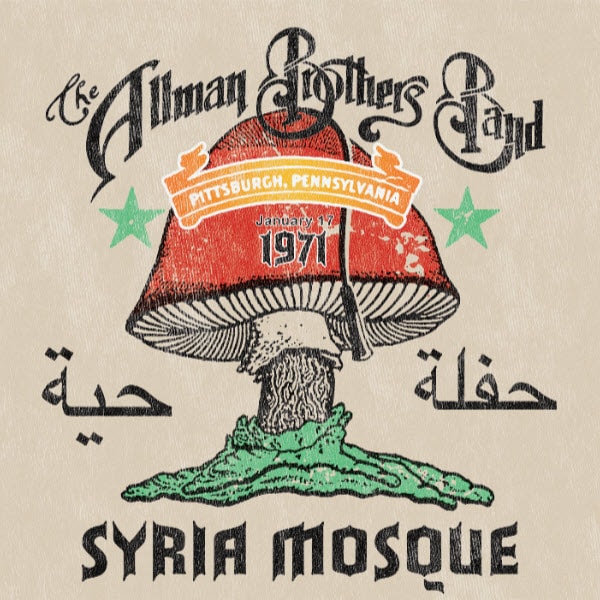 Every ALLMAN BROTHERS BAND live performance is special and unique. Renowned for their spontaneous improvisation, no two shows are ever the same; each captures a pivotal period in the band’s history and holds a story just waiting to be told.

By January 17, 1971, the Allman Brothers Band had established a sound and a reputation that belied the brief, 22-month existence of its founding line-up. After 300 shows in 1970, the band kicked off 71’ with a run through Georgia, North Carolina and Tennessee, before heading north to play Pittsburgh for the first time. The venue was the venerable Syria Mosque, a 3,700 seat theatre constructed in 1916 which served as the home for the Pittsburgh Symphony Orchestra. Syria Mosque saw myriad rock acts like the Who, Pink Floyd, the Band, Deep Purple and Yes grace its stage, with the Allmans making the first of two 1971 appearances on January 17th. Out October 28 on CD and digital via Allman Brothers Band Recording Company, Syria Mosque: Pittsburgh, PA January 17, 1971 captures that moment in history.

Recorded direct from the band’s soundboard and restored and remastered, this recording captures the arc of the ABB’s sound as they were ramping up to the classic At Fillmore East album recorded just 8 weeks later (March 1971). When you listen, it’s apparent how tight and in the pocket the original ABB line-up–Duane Allman, Gregg Allman, Dickey Betts, Berry Oakley, Butch Trucks and Jaimoe–were on this recording.

After Duane’s heartfelt acknowledgment of the band’s debt to opening act Taj Mahal, the show began with “Statesboro Blues,” and the shuffle perfection of this tune set the standard for the rest of the evening. “Trouble No More” slid right along, propelled by the rhythm work of Berry, Jaimoe and Butch, while “Elizabeth Reed” featured an unusually ethereal solo by Dickey before Duane finished it off in incendiary style.

Gregg’s visceral and weary vocals highlighted the autobiographical “Midnight Rider,” before giving way to “You Don’t Love Me,” which was centered around the run-and-gun guitar work of Duane and Dickey. This version is almost embryonic in development when compared to the magnum opus take that would be recorded two months later for the iconic At Fillmore East live album.

Per usual, “Whipping Post” served as the set closer, but that was the only normal thing about this 20-minute rendition, as Dickey and Duane erupt in a spontaneous combustion exchange that stretched the song for another six minutes or so.

This marks the first official release for this recording which has been circulating among ABB fans as a cassette for years, and occasionally a bootleg CD or vinyl disc. Although, there’s an interesting story there as well. The group returned to Syria Mosque nine months later, on October 15th, playing what would be Duane Allman’s third-to-last show before his untimely death on October 29, 1971. Copies of both the January 17th and October 15th performances would circulate amongst the ABB tape-trading community during the 1990s, with the October 15th tape many times being misidentified as Duane’s final show, and, in some cases, the dates of the Syria Mosque shows were mistakenly swapped. In any case, all the confusion has been straightened out; this band-approved, official release is from January 17th, and you can listen to Duane’s last show from October 17, 1971 at Painters Mill Music Fair, near Baltimore, by picking up The Final Note, which came in 2020.