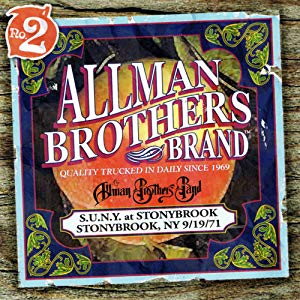 Recorded live at State University of New York on 9/19/71, just six weeks prior to Duane Allman s untimely accidental death, this 2-CD set contains the only known quality live performance of Duane on Blue Sky , one of the pillars of the Brother’s catalog.

The crowd that day at SUNY witnessed a band that was at the absolute height of spontaneous creativity, with music that ranged from loose, free-flowing jazz-like improvisation to whiskey-soaked blues, country swing to full blown rock – all of it delivered with a furious, right on the edge intensity. The band truly played as they lived, and lived as they played. With Duane Allman’s searing slide and lead lines, the melodic brilliance of Dickey Betts, Berry Oakley playing bass like a third guitar, Gregg Allman’s distinct vocals and soothing B-3, and the dual syncopated drumming of Jaimoe and Butch Trucks, the sum total of the Allman Brothers Band was greater than the considerable talents of its individual parts.

Five weeks later, while the band was back home in Macon, Georgia, 24 year old Duane Allman was killed in a motorcycle crash. His death on October 29th, 1971, cost rock music of one its greatest masters, while the Allman Brothers Band lost their founder and cornerstone. Although they would carry on and actually achieve their greatest commercial success without Duane, Stonybrook 9/19/71 features the Allman Brothers Band at their musical zenith before the circle was tragically broken.