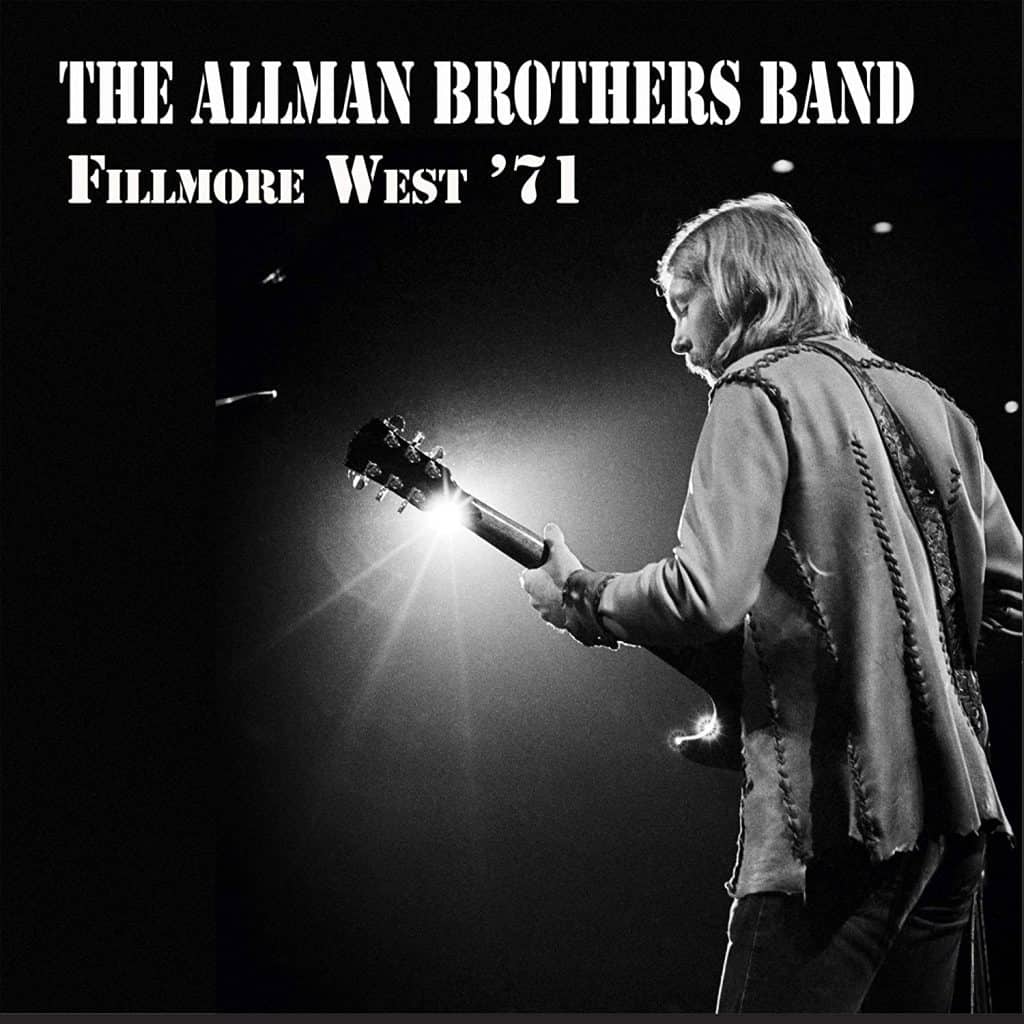 As part of the ongoing celebration of their 50th anniversary, on September 6 the ALLMAN BROTHERS BAND Recording Company–caretakers of the original band’s unreleased catalog–in conjunction with distributor The Orchard will release a four-CD set titled Fillmore West ’71, culled from an epic weekend of live music recorded at the legendary San Francisco venue. The Grammy-winning, Rock & Roll Hall of Fame band (formed in March 1969) were in great form on this weekend, where they were the middle act playing between headliners Hot Tuna and the 24-piece opener Trinidad Tripoli Street Band. This will be the debut release of these recordings. The packaging contains a front cover photo of Duane Allman from Jim Marshall Photography (taken at these shows) that has rarely been seen before.

Compiled from reel-to-reel soundboard masters, the January 29 show that kicks off this collection reads like an Allman Brothers Band greatest hits, from opener “Statesboro Blues” through the set-wrapping “Whipping Post.” On the next night, the standard sequence of “Statesboro Blues,” Trouble No More,” “Don’t Keep Me Wonderin’” and “Elizabeth Reed” was typically riveting, and then the blues-soaked “Stormy Monday” was worked in, replacing “Midnight Rider.” Gregg’s vocals were visceral and honest, while Duane and Dickey added down and dirty licks. “You Don’t Love Me” showcased some run-and-gun guitar work, and a frenzied “Whipping Post” closed out another solid night. The band–Duane Allman, Gregg Allman, Dickey Betts, Jaimoe, Berry Oakley and Butch Trucks–were loose and talkative and you can hear them really dialing their sound in at what would be a final tune-up for the seminal At Fillmore East album, recorded less than two months later. At Fillmore East would cement the band’s place in rock history and Rolling Stone would eventually call it the second-best live album ever released.

Always acclaimed for their explosive live shows, the ABB really ratcheted up the intensity and focus on January 31st. After hammering tightly through the reliable first four, the ABB placed “Midnight Rider” back into the rotation, and then Berry Oakley stepped up to the mic for a wicked and nasty take on “Hoochie Coochie Man,” with Jaimoe and Butch churning full-bore behind him. After an extensive workout on “You Don’t Love Me,” the group worked a relatively new song into the set, “Hot ‘Lanta.” Conceived out of a loose jam at the Big House in Macon, GA, the band’s home base currently an ABB museum, this group composition was cutting-edge fusion, displaying the delightful musical diversity of the Allman Brothers Band. A superior “Whipping Post” concludes the Fillmore West material, but Disc Four goes on to include a wonderful bonus track: a March, 1970 version of “Mountain Jam” from the Warehouse in New Orleans which-at 45 minutes long!-showcases a band that loved to improvise and let the music take on a life of its own.

Kirk West–who served as the “Tour Mystic” and official archivist for the Allman Brothers Band for over 20 years–played a pivotal role in re-acquiring the original live performance two-track, reel-to-reel tapes used for this release from legendary band crew members Twiggs Lyndon, Joe Dan Petty and Mike Callahan, who were the original care takers of these recordings. The tapes had been stored in closets and attics for many years, necessitating careful transfers and several successive attempts at restoration, as technology continued to improve. Interestingly in 1971, however, Kirk was a 20-year-old counterculture entrepreneur who found himself at the Fillmore West during the last four days of January. “I was living in Palo Alto with a bunch of hippie kids who, by and large, were Dead Heads. I had moved to California from Chicago, and I already was a big Allman Brothers fan,” recalls West. “I was insisting that everyone in the house go up to the Fillmore that weekend – ‘Let’s go, let’s go – the Brothers are in town, playing with Hot effin’ Tuna.”