Jaimoe in His Own Write 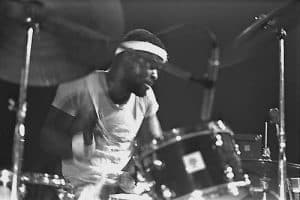 Jaimoe, man of many names, and one of the original six band members, has combined forces with fellow drummer and percussionist Butch Trucks in a million subtle, driving, playful, and energizing ways to keep the music on track and flowing.

This is Jaimoe. No, I did not play at Monterey. I played with Otis Redding 4/18/66 through 9/5/66 in the band that did “Otis – Live at the Whiskey A-Go-Go”. I joined that band a week after that record was recorded.

A very good friend of mine, a very good sax player and a hell of an organizer, Donald “Cadillac” Henry, was a great reason for me getting that break and a lot of others, right up to the fact of the reason I was in Macon was because Donald told me to go to Macon. Phil Walden & Otis were putting a recording studio in Macon. They had a company called Redwal Music. On 4/18/66 Otis had about a 9-piece band. I joined that band in Dallas, TX. In less than two weeks it was 13 pieces. Edward “Woody” Woodson was the other drummer in that band. Woody was the drummer on “Live at the Whiskey”. I really learned about playing live rhythm & blues and rock & roll from Woody Woodson & Butch Trucks. Woody could take a bass drum, snare, floor tom, hi-hat, and crash & ride cymbal and swing your ass from Washington, D.C. to L.A.

In three weeks we were in the Apollo Theatre in New York. Now we’ve got 18 pieces. I played in my first big band. I backed Percy Sledge, Patti Labelle & the Blue Bells, the 5 Stairsteps, Brenda & the Tabulations, and the Manhattans.

The Howard Theatre in D.C. was another 18-piece band. Added to that show was Smokey Robinson & the Miracles & band, also Martha & the Vandellas, and the Kin Folks, a bad ass 4-piece band out of L.A.

The next stop was the Regal Theatre in Chicago. By now we had 22-pieces and the co-star was the Queen of Soul. That’s right. The Lady Aretha. She had her own rhythm section. I was glad I didn’t have to play behind her. She raised hell about one thing or another the entire week.

I played again with the Stairsteps, Patti Labelle, and 5 guys called the Step Brothers. They were tap dancing acrobats about in their 50s and 60s. They were one of the top tap dance acts of all times. They offered me a gig in Vegas, but I had to turn them down. I was having too much fun and learning a lot playing behind all of those people in those big bands and orchestras.

Otis Was a Great Teacher

I also had a great offer from Curtiss Mayfield & the Impressions. They said my playing reminded them of Leo Morris, a New Orleans drummer who we know today as Idris Muhammed. I can thank Charles “Honeyboy” Otis for that one for Honeyboy was a great influence on Idris, “Smokey” Johnson, Zigaboo, John Boudreau, Jr., and a lot more than he’s given credit for. Honeyboy is the reason that I can play as many styles as I can. Also listening to all that stuff Earl Palmer did on those records, Honeyboy turned me on to Earl Palmer.

Just for the record, that photo I am on with Otis is 1966 in Columbus, GA at the Columbus Auditorium, where you cross the river into the Central Time zone and into Phoenix, Alabama.

I did a 42-date tour with Otis — 41 days back-to-back with a day off. We did a TV show, “The Big Beat”, hosted by a disc jockey from the famous WLAC in Nashville who on the day of taping of the show got drunk couldn’t go on. So Otis not only starred the show, but mced and hosted the show. I played behind James Carr, Mitty Collier, the Ovations, Garnette Mims, Patti Labelle & the Bluebells, Percy Sledge, Sam & Dave & band co-stars. Woody played behind Otis. That night I played 3 hours at the Parrot Jazz Club with whoever got on the stage. The next night we did the 42nd, show. Great tour. I learned a lot from Otis. I didn’t realize it at the time.

After the Allman Brothers Band’s last performance,  Jaimoe, Butch Trucks, Marc Quiñones and Oteil Burbridge got together to play as Les Brers. 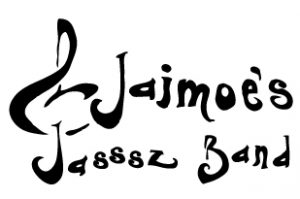 Jaimoe is still on the road today with a couple of different projects, principally Jaimoe’s Jasssz Band but also Jaimoe and Friends.  You can see the current lineup on his website, Jaimoe.com

Visit the Gallery for More Photos…

Your Chance to Win! Gregg Allman & Friends Fun in the Sun Contest Announced!

The Martha-fication of Max Bickford

Haynes is Back, Allmans are Better

Allman Brothers Find Peace and a New Set of Fans

Allman Brothers Keep Their Guitar Prowess All in the Family

The Power of Love

The Book That Never Was

Our Kind of Birds

ABB are BBT’s Favorite Band of All Time

Warren Haynes Flourishes As He Keeps The Mule Alive

Duane Allman 30 Years Down the Road

Gregg Allman – The Godfather of Fusion

On the Record with Derek Trucks

On the Record with Butch Trucks – the First Set

Are You Ready to Rumba?

The Road Goes on Forever – An Essential Collection

Billboard Checks in on the ABB’s Beacon Run

The Allman Brothers Band, “THE Band of the South”

ABB Album not listed in Discography

ABB on the Cover of Guitar World Acoustic

Roadie for a Day Game

A Trip To Macon

Beacon and Beyond: Gregg Allman and Butch Trucks – The Jambands Interview 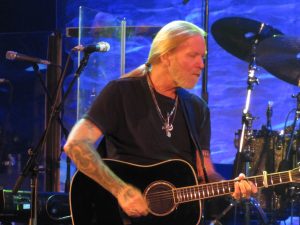 Rare AB CD to help an excellent cause!!

The Fillmore Concerts as a Defining Cultural Text

Allman Brothers Band Back in the Studio

Warren Haynes is Here, There & Everywhere at Jazzfest

Thanks to Ioannis for new ABB Look

Allman Brothers Band is Back and Energized

ABB Renew Their Legacy as a Formidable Jam Band

Allman Brothers Band Have Perfected the Art of the Jam

Allman Brothers Band from the Target Center to Blossom Music

The Trials & Tribulations of an English Allmans fan!

Drummer says the Allmans are having fun again

The Flower Guy and His Younger Brother

Warren Haynes On the Record 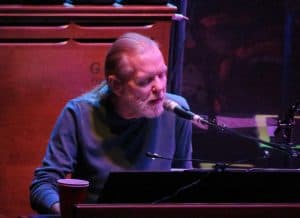